What do Democrat politicians do best? Screw their constituents, then run away from them when confronted in public. Case in point: New York Mayor Bill De Blasio.

A CBS New York reporter compared Mayor Bill de Blasio to the “cowardly lion” from The Wizard of Oz after he fled a confrontation on Thursday with an angry 63-year-old Queens woman, according to The Washington Free Beacon.

Vickie Paladino and her husband were driving through their neighborhood when they spotted the far-left mayor, who was there to announce a $16 million initiative to fix sidewalks damaged by tree roots. Paladino was so upset over de Blasio’s trip to Germany to speak at a G-20 protest in lieu of attending a vigil for slain New York police officer Miosotis Familia that she left the car to berate him.

As de Blasio approached her and a group of others to shake hands, she started to ask about his trip. He turned around with his security detail and went to his car.

CBS reporter Marcia Kramer had a scathing assessment of de Blasio, who she said “simply fled” when Paladino started her criticism.

“The woman in the white shirt single-handedly brought WrestleMania to the streets of Whitestone, Queens, but her opponent Bill de Blasio was no Hulk Hogan or The Rock,” Kramer said. “He was more like the Cowardly Lion in The Wizard Of Oz.”

Paladino caught the attention of the media assembled for the event, and she told reporters that she’d “had it” with de Blasio and doubted he had a friend in the city.

“This is got to do with a liberal, socialist mayor who is running our city and has no regard for our country,” she said. 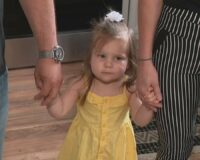