Breaking: Finally! Bowe Bergdahl has been referred for trial by court-martial on charges of desertion and misbehavior before the enemy

Photo, above: Bowe Bergdahl, with the five Taliban cockroaches Barack Hussein traded for him

Bowe Bergdahl is finally facing the music in his high-profile desertion case, having now been referred for a general court-martial. This is not a welcome development for the Bergdahl camp, his defense team, and Barack Hussein, who wanted Bergdahl to go unpunished, a mind-blowing prospect.

Six Army heroes died looking for this maggot, who was given over $300,000 in back pay upon release, promoted to Sergeant, and given a hero’s welcome home by Barack Hussein, who traded five high-level Taliban terrorist cockroaches from Gitmo for this scumbag, as well as five billion dollars…. That’s right, 5 billion hard-earned American taxpayer dollars, which was given to Qatar for its assistance in the swap, like oil-rich Qatar needs ANY American taxpayer money.

While this is by no means a slam dunk, it is a very positive development towards eventual justice. In my personal opinion, Bergdahl should also be tried for treason. 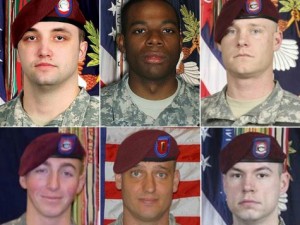 Army Sgt. Bowe Bergdahl’s high-profile desertion case was referred for trial by court-martial on Monday, in a blow to his defense team which had urged a lower-level referral.

Bergdahl was released from captivity last year in exchange for five Taliban detainees from Guantanamo Bay. He was later charged with desertion and misbehavior before the enemy, accused of abandoning his post before he was captured.

U.S. Army Forces Command announced Monday that both charges are being referring to a general court-martial.

An arraignment hearing date at Fort Bragg, N.C., has not yet been set.

Eugene Fidell, Bergdahl’s attorney, said the convening authority did not follow the advice of the preliminary hearing officer who had recommended Bergdahl’s case be moved only to a special misdemeanor-level military court.

Fidell said in a statement Monday that he had hoped the case would not go in this direction.

Bergdahl, of Hailey, Idaho, was held by the Taliban for nearly five years after he walked off his post in Afghanistan on June 30, 2009.

The trade of five Taliban leaders for his release fueled tensions between the Obama administration and Congress, as some lawmakers said they were not properly informed of the deal — and said the trade itself raised security concerns.