Our suspicions are confirmed! An actor has come forward, confirming that he and others were paid to protest at Trump campaign rally

Our suspicions are confirmed! At least some of the protesters at Trump rallies are and have been paid actors, hired by odious scumbags, not identified, but believed by one actor to be working on behalf of Hitlery Clinton.

An actor who was being paid to protest Donald Trump at a Fountain Hills, Arizona campaign rally has come forward, confirming to ABC News that he was indeed paid to protest. Answering a craigslist ad, pictured below, 37-year old actor, Paul Horner, confirmed that he received $3,500 for a day’s work, which consisted of six hours of training, followed by showing up at the rally to protest and create chaos.

I encourage all patriots to read this article and share it. If the fine patriots in Indiana will get out and vote for Trump, we can put an end to this circus, as it will effectively seal the deal, making it practically impossible for the nefarious anti-Trump dungballs to prevent The Donald from reaching the magic number of 1,237 delegates. Make us proud, Hoosiers! 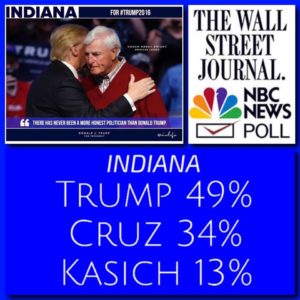 “I was given $3,500 to protest Donald Trump’s rally in Fountain Hills,” said 37-year-old Paul Horner. “I answered a Craigslist ad a little over a week ago about a group needing actors for a political event. I interviewed with them and got the part.”

Trump supporters have been claiming for weeks that the protesters are being paid for by Bernie Sanders’ campaign, but Horner disagrees.

“As for who these people were affiliated with that interviewed me, my guess would be Hillary Clinton’s campaign,” Horner said. “The actual check I received after I was done with the job was from a group called ‘Women Are The Future’. After I was hired, they told me if anyone asked any questions about who I was with or communicated with me in any way, I should start talking about how great Bernie Sanders is.” Horner continued, “It was mostlywomen in their 60’s at the interview that I went to. Plus, all the people that I communicated with had an AOL email address. No one still has an AOL email address except people that would vote for Hillary Clinton.”

“I knew those weren’t real protesters, they were too organized and smart,” said 59-year-old Tom Downey, a Trump supporter who attended the rally in Fountain Hills. “I knew there was something up when they started shouting all these facts and nonsense like that. The best we could do was just yell and punch em’ and stuff.” Downey continued, “I think we did a good job though. I was shouting at them the whole time, calling them losers, telling them to get a job or go back home to mommy’s house; I got a bunch of high-fives from my fellow Trump supporters. It was a great time.”

When asked about the other protesters at the rally, Horner said he saw most of them during the interview and training for the rally.

“Almost all of the people I was protesting with I had seen at my interview and training class. At the rally, talking with some of them, I learned they only paid Latinos $500, Muslims $600 and African Americans $750. I don’t think they were looking for any Asians. Women and children were paid half of what the men got and illegals received $300 across the board. I think I was paid more than the other protesters because I was white and had taken classes in street fighting and boxing a few years back”

Sarah Bradley, a spokeswoman forSock It Forward, a group that provides the homeless and those less fortunate with brand new socks told ABC News that she does not understand why Trump protesters would need to be paid.

“I’ll protest that guy for free,” Bradley said. “Trump is creating a place for like-minded, ignorant, bigoted, hate-filled individuals to gather and unite. You wouldn’t have to pay me anything to protest that.” Bradley continued, “Trump supporters are the last kind of people to donate socks to the homeless, they only care about themselves and their white race. I would love the day I ever see a donation from a Trump supporter, I think it would make me change my opinion about them.”

Horner said the group had a mandatory six-hour training class that had to be completed before protesting at Trump’s rally.

“During training we were taught chants to shout like ‘Dump Trump’ and ‘Trump Is A Racist’, things like that. We were told how to respond to anti-Trump comments too. If a Trump supporter said something about how great his wall will be, the Latinos in our group would say, ‘We’re just going to tunnel underneath it.’ They even gave me a shirt to wear at the rally which said ‘F*ck Donald Trump’ along with a sign to hold that said ‘Make America White Again’.”