The entitled Bill Clinton. Details of the rape of Juanita Broaddrick, as told by Broaddrick herself.

Those of us of age recall the White House during the Clinton administration and the many rumors of drugs and wild sex.

It is amazing to me that we could be on the verge of a second Clinton administration that is likely to be little different than the first, and probably worse.

The following article is an excerpt from Candice Jackson’s book, “Their Lives: The Women Targeted by the Clinton Machine.” It is only one account by one woman of the many who have reported sexual assault at the hands of Bill Clinton.

We know the Clintons fairly well by now. It is beyond amazing to me that a significant segment of the American electorate will vote to return these two entitled scumbags to the White House.

Editor’s note: Candice Jackson’s explosive book, “Their Lives: The Women Targeted by the Clinton Machine,” tells, like never before, the stories of Kathleen Willey, Juanita Broaddrick and others who have suffered from the actions of William Jefferson Clinton.

In this excerpt from the book, Jackson comprehensively covers Broaddrick’s story of being raped by Clinton, tells of her own experience being sexually assaulted and explains how she believes American liberalism encourages the forcing of the will on others.

To this point, I have carefully avoided using the word “victim” to describe any of Clinton’s women. I made that conscious effort in tribute to the maxim that overuse of a word dilutes its meaning. As comedian Ellen DeGeneres once put it, when everything is “the worst thing” then people run around saying “Oh, paper cuts – they’re the worst thing,” as if a paper cut is a “worst thing” in the same way as the death of a loved one is the “worst thing.”

While Gracen, Perdue, Flowers, Jones, Willey and Lewinsky suffered undeserved mistreatment at Clinton’s hands, none of those women found themselves victimized by Clinton in the most extreme, brutal sense of the word. Four of those women engaged in consensual affairs; the other two suffered the humiliation of unwanted sexual advances, including unwanted touching, but neither suffered forced sexual intercourse – rape.

In this final profile, the “V” word appears at last, and I hope that by reserving it for Juanita Broaddrick, its meaning will remain robust, for there is no more appropriate place for it than in her story.

In March 1976, Bill Clinton took a leave of absence from his professorship at the University of Arkansas, Fayetteville law school to run for Arkansas state attorney general. Calling the post “the principal protector of the people,” Clinton faced off in the Democratic primary against the secretary of state and the deputy attorney general.

Rebounding from his November 1974 loss in his first political race (popular Republican incumbent Congressman John Paul Hammerschmidt narrowly beat him), Clinton poured more energy and networking zeal into his attorney general campaign than the other two primary candidates combined. It paid off. He garnered more than 50 percent of the primary vote, thereby avoiding a run-off, and faced no Republican challenge in the general election, leaving him free to campaign around Arkansas for Jimmy Carter until he began his career as a public servant in November 1976, at age 30.

The ‘Stop Hillary’ campaign is on fire! Join the surging response to this theme: ‘Clinton for prosecution, not president’

Already, supporters knew that Clinton was their “governor-in-waiting,” and sure enough, by 1977 he began contemplating his bid for the chief executive spot. His only question was whether he should skip this step and go directly to the U.S. Senate. His first campaign call was to Dick Morris, to help him decide whether to run for governor or senator. Once he’d decided on the governorship, he spent the spring of 1978 running two campaigns. Publicly, he had his own primary election to deal with, though he was far and away the strongest Democratic candidate. Privately, he spent hours plotting with Dick Morris to improve the then-governor’s chances of beating his Democratic rival in the U.S. Senate race – in hopes of neutralizing that rival’s status as Clinton’s main competition as rising Democratic star in Arkansas politics. In the general election that fall, Clinton won with 63 percent of the vote to become governor at age 32.

In 1978, 35-year-old Juanita Hickey worked as a registered nurse. She was married to her first husband, Gary Hickey, but having an affair with her future second husband, David Broaddrick. She had started her own nursing home in Van Buren, Arkansas, a successful endeavor that eventually grew into two residential facilities – one for the elderly and one for severely handicapped children. The young, charismatic Clinton was in the midst of his gubernatorial race and had made a campaign stop at her nursing home that spring.

While glad-handing there, Clinton told her to be sure to stop by campaign headquarters if she was ever in Little Rock. She was so impressed with him that for the first time in her life she volunteered to help a political campaign, agreeing to hand out bumper stickers and signs. She thought he had “bright ideas” for the state and felt eager to pay a visit to his Little Rock headquarters, excited about picking up T-shirts and buttons to hand out.

Not long after that, she attended a seminar of the American College of Nursing Home Administrators at the Camelot Hotel in Little Rock. She stayed in a hotel room with her friend, Norma Kelsey. After they checked in to their room, Broaddrick called Clinton campaign headquarters and was told to call Clinton at his apartment. She did, and asked Clinton if he was going to be at his headquarters that day. He said no, but suggested they meet for coffee in the hotel coffee shop. A bit later the same morning, Clinton called her and asked if they could meet in her hotel room because there were reporters crawling around the coffee shop.

She felt “a little bit uneasy” meeting him in her hotel room, but felt a “real friendship toward this man” and didn’t feel any “danger” in him coming to her room. When Clinton arrived she had coffee ready on a little table under a window overlooking a river. Then “he came around me and sort of put his arm over my shoulder to point to this little building and he said he was real interested if he became governor to restore that little building and then all of a sudden, he turned me around and started kissing me. And that was a real shock.” Broaddrick pushed him away and said, “No, please don’t do that” and told Clinton she was married. But he tried to kiss her again. This time he bit her upper lip. She tried to pull away from him but he forced her onto the bed. “And I just was very frightened, and I tried to get away from him and I told him ‘No,’ that I didn’t want this to happen, but he wouldn’t listen to me.” But he “was such a different person at that moment, he was just a vicious awful person.” At some point she stopped resisting. She explained, “It was a real panicky, panicky situation. I was even to the point where I was getting very noisy, you know, yelling to ‘Please stop.’ And that’s when he pressed down on my right shoulder and he would bite my lip.”

Clinton didn’t linger long afterward. “When everything was over with, he got up and straightened himself, and I was crying at the moment and he walks to the door, and calmly puts on his sunglasses. And before he goes out the door he says, ‘You better get some ice on that.’ And he turned and went out the door.” The whole encounter lasted less than 30 minutes, but it changed Juanita Broaddrick’s life forever.

When questioned by an interviewer, “Is there any way at all that Bill Clinton could have thought that this was consensual?” Juanita Broaddrick answered, “No. Not with what I told him, and with how I tried to push him away. It was not consensual.” The interviewer, NBC’s Lisa Myers, pressed for specificity. “You’re saying that Bill Clinton sexually assaulted you, that he raped you?” Broaddrick answered, “Yes.” 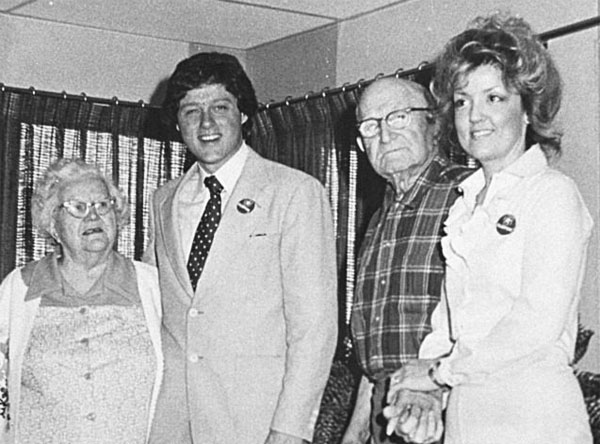 Juanita Broaddrick, right, with residents of her Arkansas retirement home and Bill Clinton in April 1978, the same month she says Clinton raped her

“I wouldn’t invite them to my house,” Broaddrick told Jackson about the Clintons. “I just can’t imagine that the American people will invite them back to the White House.”

Jackson’s account of the gruesome attack Broaddrick experienced is told in one chapter of “Their Lives,” republished by WND last January.

The Facts Behind Israel’s Designation Of 6 PFLP-Linked NGOs As Terrorist Organizations
October 26th, 2021 The Lid