VIDEO: Wow! Chaos at New Mexico Trump rally. Cops in full riot gear, police horse knocked down. How much did Hitlery have to pay for that?

Photo, above: Trump protester being forcibly removed from the Trump rally venue in Albequerque, NM.

It has now been proven that Trump protesters are being paid to create havoc at Trump rallies.

One paid protester, Paul Horner, recently confessed that he was paid $3,500 to protest the Trump rally in Fountain Hills, Arizona. He suspected the source of the funding was the Hitlery campaign.

According to Inside Edition, which posted the youtube video, below, “There was chaos on the streets outside a Donald Trump rally in Albuquerque, New Mexico, as critics of the likely Republican presidential nominee hurled rocks at police officers Wednesday night. Protestors outside The Albuquerque Convention Center battled police in full riot gear and on horseback. Cops set off smoke grenades and pepper spray, while protestors set Trump T-shirts on fire and threw rocks at the venue and authorities. Some protesters covered their faces with masks.”

At one point (photo, below) a police horse was knocked down by rushing protesters. 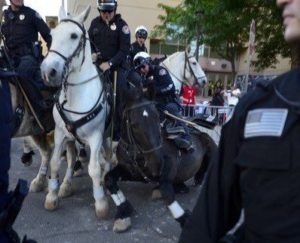