President Trump hit it out the park! Polling for his first State of the Union Address is in and the results are stunning!

Notwithstanding the frowns on the left side of the aisle, the boycotts, and the boos, President Trump’s first State of the Union Address was a raging success.

In a CBS poll, a full 75% percent of Americans approved of President Trump’s Tuesday night speech on the current state of our nation.

The news was all good in President Trump’s address, marked by the historic economic numbers, a runaway economy, and an unbridled Reaganesque optimism for the future.

100% of those polled felt proud or safer, compared to only 35% who felt scared or angry (presuming multiple answers were permitted) 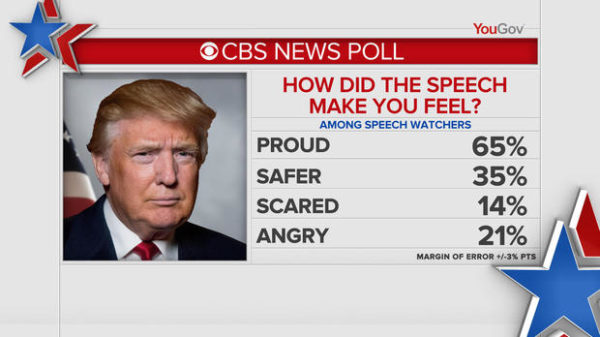 An amazing 97% of Republicans polled approved of the President’s speech (I have to wonder who the 3% are), while a shocking 43% of Democrats approved of the speech (VERY bad news for Democrats).

And the sweet spot in any national election, particularly in battleground states, independents approved of President Trump’s address by an overwhelming and stunning 72%, which could loom yuge in the upcoming midterm elections.

SOTU got nearly full approval from Reps and mixed from Dems in our instant poll pic.twitter.com/XujoCK29PA

Of note, former anti-Trumpers, conservatives and liberals alike, saw their opinions of President Trump and his agenda reversed as a result of his State of the Union address.

Tonight, I owe Donald Trump an apology. Tonight, I was moved and inspired. Tonight, I have hope and faith in America again.

It may go away tomorrow…
But tonight, America is great again. #SOTU

I didn’t hear any divisiveness. You must not understand English well.

Would it matter that the investigation is a bad joke? Not to you liberal weenies, it wouldn't! You have no problem taking out those you hate, no matter if the method is unethical, immoral or illegal. It's the reason our country is in the shape it is and why we need a Donald Trump