VIDEO: Sean Hannity and Pat Buchanan discuss the prospect of a brokered GOP convention and the theft of the nomination from Donald Trump

Photo, above: More like a rock concert than a political rally, Donald Trump promised to Make America Great Again before 40,000 enthusiastic fans in Mobile, Alabama, August 21, 2015

Pat Buchanan nails it! The future of the Republican Party belongs to the Trump supporters…. as long as The Donald wins the nomination, that is. Discussing the prospect of a brokered convention and the constant noise and maneuvering coming from the RNC and establishment GOP involving running a candidate other than Trump, even a brand new face, one who did not run in the primary, like Benedict Romney or Paul Traitor Ryan, Buchanan was spot on in his analysis.

Buchanan believes that if the Republican Party does not get behind Trump, then it will no longer be America’s party, as it was under Ronald Reagan. I believe it is much worse than that. If The Donald gets over 1,100 delegates, that means Canadian Cruz will finish with maybe 700 delegates, tops, likely lower, barring any dirty RNC tricks like the Colorado voterless primary. If the GOP does not get behind the man who has been their front runner since Day One they will have effectively committed Republicide, the self-inflicted death of the Republican Party.

Donald Trump currently has 845 delegates. Of the 733 still available in upcoming state primaries he needs 392, or 53% of the remaining delegates, to win the nomination outright. Maybe I’m thinking with my heart, but I firmly believe he will make it, again, barring any monkey business from the RNC and/or respective state GOP leaders.

Delegate-rich California is the key, offering 172 delegates on the final day of the primary season, June 7. Were I Trump I would be concentrating major resources, time and money, to California. If he wins in the Golden State, where both Politco’s polling, as well as the most recent polling by CBS/YouGov, have Trump ahead of the Canadian by 18 points, then Trump wins the nomination outright. Thus, we are sticking to our prediction that The Donald will reach the magic number of 1,237 delegates on June 7. 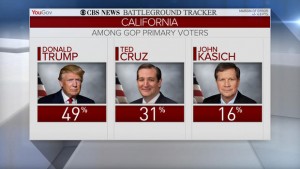 An exerpt of Sean Hannity’s conversation with Pat Buchanan, and the video, follow….

Pat Buchanan: Sean, Rove talks about a fresh face. We have watched this process for a full year almost. We’ve watched it every week. It has been terrific. We have seen millions and millions of people come out, and the Republican Party, Rove, and all the guys on Capitol Hill, the hated establishment, are going to get up and tell us, ‘Hey, folks, that all was just advisory. We’re going to decide on the nominee when we get to the convention in the back rooms and who we think will best represent this small party of ours.’ I think again, Sean, I mean the Republican Party in the Reagan era was America’s party. That would be the end of America’s party, all the hopes to become that again.

Sean Hannity: There’s a contentious battle, especially on social media, if you’re a Cruz supporter, if you’re a Trump supporter, you can read it, it’s intense. Here’s the question: I believe if the party doesn’t unite behind the winner, and that means all of the seventeen that originally began here, and the rest of the party, and the establishment, and I think some establishment might want to see Hillary win so they can say to the voters, ‘Oh, see, we told you so, you should have gone with our establishment candidate.’ But, the question is, do you see them uniting in the end knowing that if they don’t Hillary Clinton is the next president?

Pat Buchanan: I think any Republican who’s a major figure in the Republican Party, who walks away if Trump is the nominee and says, ‘I’m not endorsing him and I really don’t care if he loses’ is going to be just like the folks in ’64 – Rockefeller and Romney  and Scranton and all the rest. And after that they were ancient history, Sean. Richard Nixon and Ronald Reagan went all out for Goldwater when he was fifty points behind. Nixon traveled to more states I think than Goldwater did. They fought for the party and when the party went down to defeat they were right there standing with their guy. The future belonged to them because of that and it didn’t belong to the guys who walked away and went over the hill.