You Trump haters may want to leave the room for a few minutes. But first, guess where The Donald’s support is strongest?

I’m sure Nate Cohn is a great guy to drink a beer with at a neighborhood barbecue, but in his article, below, his hatred for Donald Trump is transparent and palpable, making him look like a rabid, foaming-at-the-mouth Trump-hater.

Mr. Cohn uses the most negative language he can muster to describe how Trump’s runaway lead in the GOP primary is big trouble for him. LMAO! Right, Nate, no one wants a problem like runaway success.

What is not emphasized in Cohn’s article is the fact that The Donald’s strongest support comes not from traditional conservative Republicans, where his support is still a robust 29%, but from Democrats, many of whom describe themselves as Republicans, even though they are registered as Democrats. Those are called crossover voters, Nate, and horrible news for Hitlery or whoever the eventual Democrat nominee winds up being.

Another omission by Mr. Cohn is the stunning news that one of Trump’s strongest states is New York, second only to West Virginia is terms of per capita support, and a mind-blowing development for a state that has historically been one of the most liberal states in the union. The entire state is in the 40% range for Trump. Not since Ronald Reagan’s landslide victory in 1984 has New York gone to a Republican presidential candidate.

Like The Ronald in 1984, The Donald is kicking ass! But nice try, Nate. 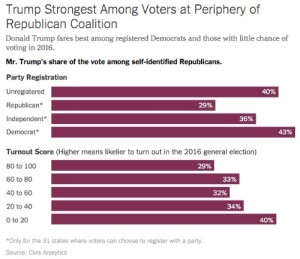 Donald Trump holds a dominant position in national polls in the Republican race in no small part because he is extremely strong among people on the periphery of the G.O.P. coalition.

He is strongest among Republicans who are less affluent, less educated and less likely to turn out to vote. His very best voters are self-identified Republicans who nonetheless are registered as Democrats. It’s a coalition that’s concentrated in the South, Appalachia and the industrial North, according to data provided to The Upshot by Civis Analytics, a Democratic data firm.

Mr. Trump’s huge advantage among these groups poses a challenge for his campaign, because it may not have the turnout operation necessary to mobilize irregular voters.

But it is just as big a challenge for the Republican Party, which has maintained its competitiveness in spite of losses among nonwhite and young voters by adding older and white voters, many from the South. These gains have helped the party retake the House, the Senate and many state governments. But these same voters may now be making it harder for the party to broaden its appeal to nonwhite and younger people — perhaps even by helping to nominate Mr. Trump.

The Civis estimates are based on interviews with more than 11,000 Republican-leaning respondents since August. The large sample, combined with statistical modeling techniques, presents the most detailed examination yet of the contours of Mr. Trump’s unusual coalition.

The estimates reflect the race as it was on Dec. 21, when Mr. Trump led a surging Ted Cruz, 33 percent to 20 percent. The modeled estimates do not include people who are undecided, so all of the tallies are modestly higher than they would be if the survey were reporting the unmodeled results with undecided voters.

Perhaps above all else, the data shows that Mr. Trump has broad support in the G.O.P., spanning all major demographic groups. He leads among Republican women and among people in well-educated and affluent areas. He even holds a nominal lead among Republican respondents that Civis estimated are Hispanic, based on their names and where they live.

But Mr. Trump’s lead is not equal among all G.O.P. groups, or across all parts of the country. His support follows a clear geographic pattern. He fares best in a broad swath of the country stretching from the Gulf Coast, up the spine of the Appalachian Mountains, to upstate New York.