From Andy Grimm, The Times-Picayune:

Jefferson Parish Sheriff’s deputies have arrested a pair of New Orleans teens for the shotgun murder of David Pence and his son, Nicholas, in Metairie. 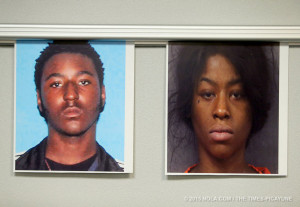 Normand said Allen gunned down the Pences Wednesday night inside their home in the 3700 block of Clifford Drive, shooting David Pence three times with a shotgun, then shooting Nicholas Pence twice.

Normand said Degruy told investigators she and Allen, who had pulled into the Pences’ driveway in a stolen vehicle, had been committing car burglaries in the neighborhood.

Normand said it was not clear why Allen shot the Pences, nor whether David Pence was awake when he was killed.