Gang of 40 black cowards brutally attack a lone white man in Cincinatti, leaving him bloody and unconscious, as goons laugh and taunt

On July 4th, at Cincinatti’s Fountain Square, a group of 40 black cowards brutally beat a single white man to a bloody pulp. The video, below, shows the injured victim lying unconscious on the sidewalk, as more savages gather around to taunt and ridicule the unconscious man. At the beginning of the video one young lowlife can clearly been heard laughing and taunting, “Damn, nigga, you just got knocked the f**k out! Damn, bitch!” while a few others try to help the man, attempting keep the crowd of sneering, jeering goons back.

Although youtube has removed the video of the actual assault, I have posted (below) a local TV video report of the incident showing a portion of the cowardly attack. Keeping with the officially-mandated politically correct fable, watch as the reporter amazingly describes the video as “a man who lost a fight,” being careful not to comment on the obvious racial overtones. “A man who lost a fight?” Really? How about a lone white guy brutally attacked by a gang of forty black racists?

The politically correct powers that be in Cincinatti have changed the original police report, which labeled the assault as a hate crime, claiming that the original report was in error, and that the cowardly assault was NOT a hate crime after all. What else do you call it? The Cincinnati Enquirer reports that police have backed away from the “anti-white” description of the attack:

“The assault on a man near Fountain Square on Saturday night was incorrectly described as an “anti-white” crime in the official police incident report, Cincinnati Police Capt. Mike Neville said Monday.

“Christopher McKnight, 27, was jumped on and beaten by a group of people that moved over from the “unruly” crowd that gathered on Fountain Square around 11:30 p.m. An incident report released Monday said the assault was an ‘anti-white’ hate/bias crime.”

“Neville said the investigation is ongoing and does not believe the assault was a hate crime at a Monday news conference.

Not playing the PC game, one local police officer, who witnessed the savage attack, offers a more honest and candid account of What Actually Happened At Fountain Square On 4th of July. His name has been withheld for obvious reasons:

“So after my 4th of July night from hell I thought I would post the truth as to what went on last night in Downtown Cincinnati. Many news outlets although they were there will fail to report…The Truth. The truth is I’m sitting in the district catching up on reports when an officer needs assistance comes out over the radio on Fountain Square. My partner and I scream down there to help out. I get down there to see glass bottles flying everywhere from a mob of out of control misguided youths. Okay that was a nice way of saying a bunch of thug idiots. They thought it would be appropriate to throw these bottles at police officers. While dodging these bottles I found one officer that was actually punched in the face by one of these assholes. Luckily he was apprehended. This was just getting started.

We were trying to keep everyone under control and push everyone into one area to get them off of Fountain Square. So then is when the crowd got even further crazy, they began throwing large fireworks at us. While trying to figure out if fireworks or gunshots, usually you could tell, but we weren’t taking any chances. I look down 5th st to see a few of my brothers and sisters trying to apprehend an individual and begin chasing him. I immediately give chase and even though I’m getting a little older still catch the guy and he gets the 5 second taser ride. This seems easy enough right…well now we’ve got the whole crowd bearing down on us all with their phones out video taping…or throwing stuff at us. (Later found out that this guy also punched a police officer in the face)

We get this guy in custody, and it’s the second year in a row I have a tasing in this area on July 4th…guess it’s just not my day. So then we form into riot formation with helmets on and begin passing out the shields. Honestly this was the first time I got to partake in this. So we see ahead a scuffle begin and think it’s just a fight. Well not so much, it was like 40 v. 1. I saw 40 v. 1, it was 40 black youths stomping the crap out of one unlucky male white. He didn’t do anything to deserve this beating except be white.

I’m going to skip all the rhetoric and just say don’t we all matter??? This just pissed us all off. Time to rescue or at least try to get these thugs off of him. So we were sent in with shields and arrest team to do a victim rescue. Feel bad for the guy since he nor anyone deserved a beat down like that for no reason. The next hour or so was just getting these assholes out of the area and back to where they came from. I hope every one of the people who threw a bottle, fired a handgun, threw fireworks at us, and most importantly beat that poor guy within inches of his life get what they deserve…in this life or the next.

To make matters worse it was like a perfect storm with the Reds game getting let out at the same time we were for a lack of a better phrase, being attacked. I saw little kids holding their parents hands and parents looking at us like what the hell is going on? They had no clue what was going down nor should they have to expect seeing what they saw.”

Unlike the local media reporting of the attack, the mug shot camera had no problem identifying the race of two of the cowardly perps…. 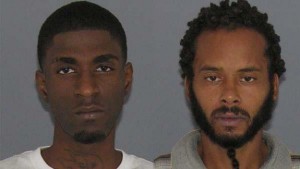