CAIR leader calls for overthrow of Trump’s administration. Now that he is aware of the penalty for sedition, he is claiming it was “an inside joke”

The sort of rhetoric being used by the left to voice their displeasure with America’s choice for president is incredibly dangerous, should never be permitted, and is likely to result in criminal investigations and possibly criminal charges.

Such is the case with Madonna who declared to a large crowd that she thought an awfully lot about blowing up the White House. This is NOT free speech. This is as criminal as screaming “FIRE!” in a crowded theater that results in death and injury, and I don’t believe Donald Trump and Jeff Sessions are going to put up with it.

When Madonna and others get away with inciting violence, it causes others to also push the envelope to see what they can get away with.

The Council on American Islamic Relations (CAIR) is controversial, to say the least.  It is an organization whose leaders have claimed to be above the laws in the US because they are Muslims.  They’ve also called for an alliance with groups such as Black Lives Matter in order to accomplish their agenda, according to Truth and Action.

CAIR has a history of using intimidation to advance its goals.  However, when it starts advocating the violent overthrow of the US Government it has stepped outside the bounds of constitutionally protected free-speech and has engaged in criminal behavior.  Those perpetrating this should be charged and prosecuted.  And racism has nothing to do with it.

So when Hussam Ayloush, the Los Angeles head of CAIR tweets on election night the line which translated from Arabic means, “The people want to overthrow the regime,” it’s worth taking a look to see if this is his organization’s real position or not.  After all, this isn’t a slogan Ayloush just thought up — “It was a slogan first used during the Tunisian revolution, which kicked off the Arab Spring, where dozens of totalitarian Islamic nations were either toppled or faced serious street demonstrations. It was also the slogan during the overthrow of Egyptian leader Hosni Mubarak.”

According to Daniel Pipes of the Mideast Forum, “that second line is Arabic (“الشعب يريد إسقاط النظام‎‎”) for ‘The people wants to bring down the regime.’”

The slogan was first used during the Tunisian Revolution which kicked off the Arab Spring. It was also used frequently during the Egyptian revolution in which the regime of Hosni Mubarak was overthrown.

Despite Ayloush’s tweet, other CAIR leaders showed restraint in the face of Trump’s election.

According to The Daily Caller, Nihad Awad, the longtime CAIR executive director and Hamas sympathizer, struck a conciliatory tone.

“As citizens of this great nation, we accept the result of the democratic process that has bound us together as one nation,” Awad said. “Regardless of who won or lost yesterday’s election, American Muslims are here to stay. We are not going anywhere, and will not be intimidated or marginalized.

Like those who have made similar comments, Mr. Ayloush has backtracked by saying it was something of an inside joke.  If so, it’s not funny.  Perhaps he should check out the law.

“Whoever knowingly or willfully advocates, abets, advises, or teaches the duty, necessity, desirability, or propriety of overthrowing or destroying the government of the United States… Shall be fined under this title or imprisoned not more than twenty years, or both.”

The law is for everyone.  And there’s no racism in that statement. 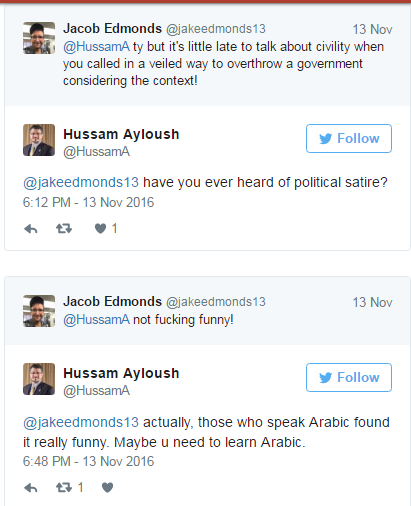 Since Ayloush has been made aware that his stupidity constitutes sedition, the penalty for which is up to 20 years in prison, he is attempting to walk back his statement, calling it “satire” and an “inside joke.”

Uh-huh. Tell it “inside” a federal penitentiary!