VIDEO: BOOM! This is how you handle an anti-Trump demonstration!

The populist movement which includes the election of Donald Trump is sweeping the globe. Trump’s election is being protested by purse-swinging men and female lumberjacks worldwide. Sigh.

Thankfully, the crybabies are weak sissies and need only be laughed at by the normal, liberty-loving people of the free world. Laugh at them. Pity them.

There are many ways to address the anti-Trump protesters. Tear gas and rubber bullets for the more violent sort, gentler measures for the screeching crybabies. The Aussies in Sydney had a very creative and effective approach, skywriting “TRUMP” right over the heads of the crybabies. Cool!

Thousands of people have planned to take part in marches including a Women’s March that has been organised in London on Saturday afternoon, according to Express.

In Sydney and Melbourne huge numbers gathered to protest against the 45th President of the United States.

However the demonstrators where left shocked after supporters of the billionaire paid to have Mr Trump’s name written in the sky above Martin Place.

In the footage the skywriting plane can be seen spelling out President Trump’s surname as protesters are marching underneath. 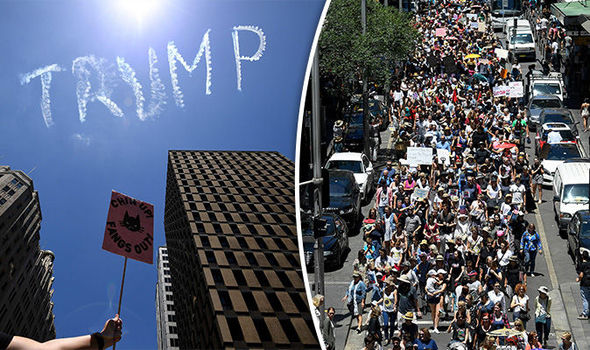 It has been reported that Skywriting Australia were approached by a group of people to spell out the president’s name at the same time of the march.It is believed that the cost to spell put the president’s name would be in the region of $4000 (£2,400 GBP).About 10 supporters paid to have Mr Trump’s name written in the sky in front of supporters but wanted to remain anonymous after their reply to the anti-Trump rally.A spokesperson for the company told Mail Australia: “They just wanted to show a bit of support for Trump seeing as he did win an election.