ATF Outrage!! It’s only racial profiling if Republicans do it. 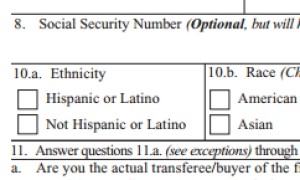 From Suzanne Olden, Clash Daily
So, you’re standing in a store, filling out a form for a purchase and there is a spot asking for your race. There is no opt out allowed, you must give the information. Never happen, you say? No business can require it, you say? Think again. Retailers of firearms are required, by the ATF, to gather information on a buyer’s race and nationality. Racial profiling anyone?

Obama’s ATF is now forcing gun buyers to declare their race and ethnicity. They gave an explanation for the change: they said the change was made because it was required to comply with an Office of Management and Budget (OMB) reporting standard put into effect during the Clinton administration. Yes, CLINTON. The requirement is more than a decade old, and was never put into effect… until now.

In reality, the change was made during a period when the Obama administration was building gun control cases. They justify it by saying U.S. firearms dealers were supplying Mexican gangs with weapons and that violence related to the sales was seeping across the border. Last time I checked, criminals rarely, if ever, buy their weapons legally.

I guess they really forgot that the guns that went over the border came from the DOJ during Fast and Furious, not law abiding gun dealers!

The policy really has nothing to do with that, and it creates no law enforcement value, but a lot of privacy intrusions. Oh, and the whole racial profiling thing. The form in question is the ATF’s Form 4473, which is a transactional record that gun sellers are required to keep. The entire form must be filled out, there are no opt out sections. So, when asked if the buyer is either Hispanic, Latino or not, they must check it. Then a buyer must check his or her race: Indian, Asian, black, Pacific Islander or white. If the buyer misses the check box, or refuses to fill it in, the gun dealer is the one in trouble.

Also another important fact to keep in mind is that this information isn’t require to be obtained under federal law for any transaction dealing with the purchase of firearms.

The argument made is that the information isn’t put in government hands. The forms aren’t supposed to be given to the ATF, since the form is supposed to be kept in a gun retailer’s possession at all times. It’s not part of any registration form, and the only time the ATF is supposed to be able to access them is during any kind of criminal investigation or during a random audit of the dealer. Right…

Have we forgotten about the gun dealer in New York who was bullied into giving up buyer information to the government? “We’ve been contacted by several dealers saying ATF is or has been making wholesale copies of their 4473 forms, and it’s just not legal,” said Erich Pratt, spokesman for Gun Owners of America, a gun advocacy group. “If this is what they’re doing somewhat out in the open, what’s going on behind closed doors? Are these names and demographic information getting phoned [in and] punched into a government computer? Do they ever come out?” Of course they are. You can count on it.

It’s an intrusion on our privacy, plain and simple. “This issue concerns me deeply because, first, it’s offensive, and, secondly, there’s no need for it,” said Evan Nappen, a private practice firearms lawyer in New Jersey. “If there’s no need for an amendment, then there’s usually a political reason for the change. What this indicates is it was done for political reasons, not law enforcement reasons.”

Let’s think about what would happen if this was any other kind of sale or a GOP administration collecting the information. Another kind of purchase that is made that requires registration is a car. A form for dealers to keep on hand tracking, let’s say, insurance information is suddenly required and it MUST have race and ethnicity listed on it. Now make the administration who required the information a GOP President. Can you just hear Al Sharpton now starting in about “HOW DARE THEY ASK FOR RACE INFORMATION!! DRIVING WHILE BLACK! DRIVING WHILE BLACK!” (Because all GOPers are racists anyway…)