VIDEO: Another mysterious death of an individual opposed to Hitlery and the DNC 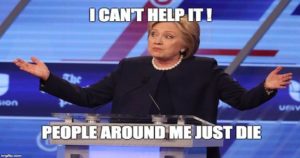 There is a croaking epidemic underway amongst those opposed to Slick Willie, the Wicked Witch of Benghazi, and the Democrat Party.

Shawn Smith, the young attorney who served the process papers on the DNC for the lawsuit Bernie Sanders followers are filing, charging the DNC with fraud, has been found dead on his bathroom floor by his girlfriend. It is rumored he was the lead attorney in the case, but that cannot be confirmed at this point.

“A death a day” should be the Clinton campaign slogan. It serves as both a warning and a population reduction platform plank. A twofer! You know how altruistic those liberals are. Nothing they wouldn’t do to advance the health, welfare, and greater good of the human race.

The really good news, if you’re a liberal, is that since passing Shawn has switched parties and will be voting Democrat in November.

According to Morning News USA, “The activist was known to many distressed Democrats as the young man who served the Democratic National Committee (DNC) with a lawsuit on early July 2016. The lawsuit alleged that the DNC has done “fraud” in favoring Hillary Clinton over Bernie Sanders during the Democratic primary process.

Facebook, Reddit, and Twitter were flooded by rumors and conspiracy theories. There were many users who felt concerned that the activist’s death may have been directly linked to his role as process server for the DNC lawsuit.

Although there are people who said that the activist was the “lead attorney” on the case, but the claim had not yet been corroborated.”