OK, call me a conspiracy theorist. That is what those of us who believe Hitlery used a double yesterday to give the public the impression that she is healthy and happy are being called. Next we will be sexists, racists, xenophobes, homophobes, Islamophobes, a general basket of deplorables.

There is no question in my mind that the woman who walked out of Chelsea Clinton’s apartment building yesterday was a Hitlery double. But let’s look closer.

Shortly after Hitlery’s “medical episode” yesterday, where she was dragged to her handicap-equipped van by her security detail, stuffed into the back seat, and whisked off to Chelsea’s, she emerged from Chelsea’s place healthy and happy. BUT she was without her security detail, which I believe would be a first for the Wicked Witch of Benghazi.

“All through her 2016 campaign, Clinton has always been surrounded by an entourage. The majority of the entourage that are attached to Clinton are members of the Secret Service. No agents are seen with Clinton as she exits the apartment building.”

Watch the video, below, of the “other” Hitlery emerging from Chelsea’s apartment building, stopping to talk to a young girl and allowing a photo to be taken….

That is Hitlery Clinton, folks. Or is it? Loudly and clearly, I say, “No, it is not!” Look at the two pics below with the fake Hitlery on the left, and the real Hitlery on the right. Is it not clear?

Maybe Hitlery should go into the diet plan biz. She could make a fortune, a legitimate one this time. If you can help people lose fifty pounds an hour, you’ve got it going on! 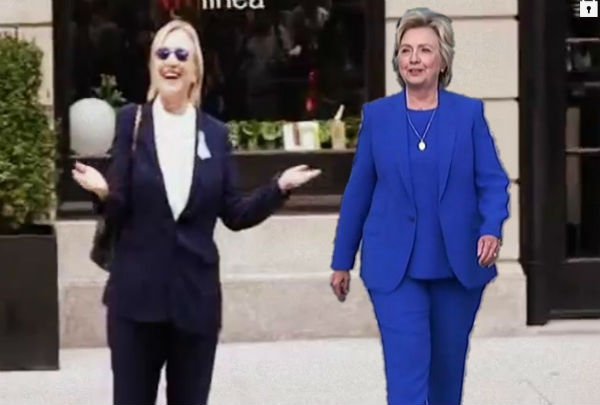 Who among Hitlery’s advisory staff would be stupid enough to say, “Yeah, that’s the ticket. Spittin’ image!?”

Off-Duty Firefighter Jumped by Mob Who Tell Him It's 'Fight Night' Before Brutal Beating
July 25th, 2021 Flag And Cross