It hits the fan again in Ferguson. On Michael Brown anniversary, close friend of Brown fires at police, who shoot him several times. He is in critical condition

Photo, above: Angry protesters scream and shout at a police line shortly before shots were fired in an officer involved shooting in Ferguson

Ferguson was put under a state of emergency yet again today after commemorations of the anniversary of Michael Brown being shot dead by a police officer descended into violence.

Stenger said in a statement that his decision was because of the ‘criminal unrest’ and ‘attacks on businesses and law enforcement’ that had put public safety at risk.

One teenager (Tyrone Harris) is in a critical condition in the hospital after being shot by officers after he allegedly opened fire on an unmarked police SUV. And a store in West Florissant, Ferguson, was looted by youths.

The measure means that St Louis County will now take over the policing of the protests from the Ferguson Police Department. It puts the St Louis suburb back in the same position it was in in November when Missouri governor Jay Nixon declared a state of emergency ahead of the grand jury decision not to indict former Ferguson officer Daren Wilson, who shot Brown.

In a statement Stenger said: ‘The recent acts of violence will not be tolerated in a community that has worked so tirelessly over the last year to rebuild and become stronger.

‘The time and investment in Ferguson and [the neighboring city of] Dellwood will not be destroyed by a few that wish to violate the rights of others.’ 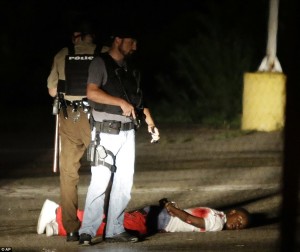 Harris looked lifeless on the ground before he was taken away in an ambulance to the hospital for treatment. He was last reported in critical and unstable condition 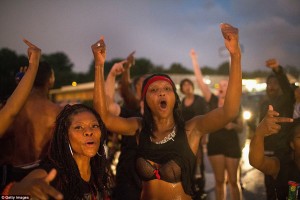 On Monday dozens of people including activist and philosopher Cornel West were arrested as they protested outside the Federal Courthouse in St Louis.

But the main fear of further protest was because of a friend of Michael Brown being in a ‘critical, unstable condition’ after being shot by police when he used a stolen handgun to fire on officers during a protest to mark the one-year anniversary of the 18-year-old’s controversial death.

St. Louis County Police Chief Jon Belmar said that plainclothes officers were tracking the man at around 11:15pm, while several hundred people gathered on West Florissant Street to take part in the demonstration.

He added that the man approached the officers, who were in an unmarked police car and opened fire. The officers returned fire from inside the vehicle. They then pursued the man on foot. The chief said the man again fired on the officers and all four fired back.

The suspect has been identified as 18-year-old Tyrone Harris Junior by his father, who revealed that his son was a ‘real close’ school friend of the late Michael Brown. ‘We think there’s a lot more to this than what’s being said,’ Harris Senior was quoted as saying in local media reports.

Footage shot by protester Tony Rice, who was live-tweeting near a McDonald’s under the Twitter name @search4swag, showed a black man lying face down on the floor with his hands cuffed behind his back and a large blood stain on his torso. Two police officers can be seen standing over him with their guns drawn but do not assist him.

Speaking at a press conference in the early hours of Monday morning, Belmar said that plainclothes officers had been tracking the man, who they believed was armed, during the protests when he spotted them and opened fire.

The officers returned fire from inside the vehicle. They then pursued the man on foot. The chief said the man once again fired on the officers, with all four continuing to fire back.

Later Monday, the St. Louis County Prosecuting Attorney’s Office issued charges against Harris for four counts of Assault on Law Enforcement in the First Degree, five counts of Armed Criminal Action, and one count of Discharging or Shooting a Firearm at a Motor vehicle.

Harris is being held on a $250,000 cash only bond. Harris is still at a local hospital in critical condition. 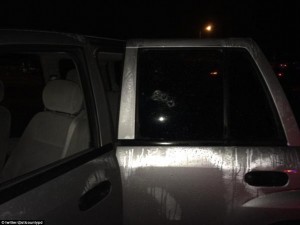 Several unmarked police cars were targeted by protesters. Police exchanged gunfire from inside the vehicle and then pursued Harris on foot. Over 50 shots were fired

Describing their relationship, Mr Harris said his son and the late 18-year-old had been ‘real close’, adding: ‘We think there’s a lot more to this than what’s being said.’

Several family members gathered outside Barnes Jewish Hospital this morning, where Harris continues to fight for his life.

His father told KTVI Monday morning that doctors told him his son’s condition hadn’t changed and that they were waiting for swelling to go down before continuing surgery on the teen.

Harris suffered several gunshot wounds to his spine, chest and kidney, according to his family.

Family members also voiced skepticism that Harris would have shot at police.

Harris’ girlfriend, Quenesha Coley, says that they had gone to the demonstrations to pay respects to Brown on Sunday when things turned violent and they got caught in the wrong place at the wrong time. 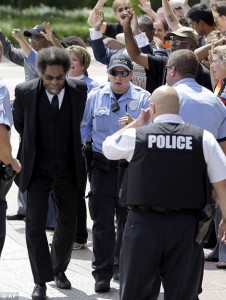