A snapshot of the American injustice system, home to the world’s largest banana republic

One of these individuals (pictured below) sent a career-ending classified email over an unsecured email system to protect the lives of fellow Marines. He was warning his colleagues of a (later validated) impending danger, and was involuntarily discharged from the Marine Corps for this transgression. His name is Major Jason Brezler.

Now, prepare to scream and pull your hair out. According to Marine Corps Times, “The email Brezler sent that prompted the investigation was meant to alert Marines in Afghanistan about Sarwar Jan, a corrupt Afghan police chief believed to have ties to the Taliban. About two weeks later, the three Marines were killed when one of Jan’s “teaboys” — a personal servant — gunned them down on a Marine outpost. Killed in the attack were Staff Sgt. Scott Dickinson, 29, Cpl. Richard Rivera, 20, and Lance Cpl. Greg Buckley, 21. 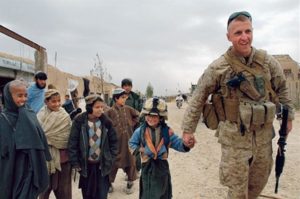 The other individual, below, sent hundreds of classified emails over an unsecured email system for “convenience,” was never charged (corruption to the highest level), and is now running for President of the United States as a Democrat. Should she win, she will have access to America’s most vital secrets, for which she has already demonstrated a clear and complete disregard. 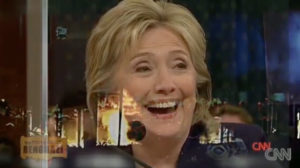 We refer to her, alternately, as Hitlery Clinton, The Wicked Witch of Benghazi, and Monica Lewinsky’s ex-boyfriend’s wife. The Democrat Party is about to nominate her as their chosen candidate to run for President of the United States. 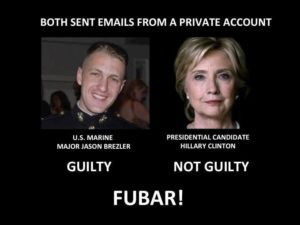 According to Zero Hedge, “If Donald Trump doesn’t soon start talking about each one of those six laws, then his supporters should be asking him whether he himself is hiding something, because those six laws make crystal-clear that Hillary Clinton committed serious crimes, such that, even if she is convicted only on these six slam-dunk statutes (and on none other, including not on the ones that Comey was referring to), she could be sentenced to a maximum of 73 years in prison (73=5+5+20+20+3+10+10). Add on others she might also have committed (such as the ones that Comey was referring to, all of which pertain only to the handling of classified information), and her term in prison might be lengthier still.”

I personally believe that if Donald Trump is elected, Hitlery will spend the rest of her life in a cage. I pray that is the case. Many American heroes have lost their lives due to the incompetence and indifference of this corrupt bitch!

Venezuela and Mexico have nothing on the United States, which is now proven to be just another corrupt banana republic where a handful of lawless actors rule, imposing the harshest and most restrictive laws on the rest of us. Hopefully, Donald Trump can change that.

For those who don’t know what FUBAR means, ask a vet. He or she will know.