Hey, Al Gore, the Swedes are freezing their patooties off, recording a temperature of 34.8 degrees below zero, you miserable fraud!

Quick, someone contact Al Gore! The Swedes are in desperate need of a good shot of global warming.

In northern Sweden, a record cold temperature reading was recorded of negative 34.8 degrees Celsius, which is 30 degrees below zero, Fahrenheit.

Al Gore should stick to inventing cool stuff, like the internet, and being the inspiration for Hollywood movies. What a useless fraud! And Barack Hussein is still embarrassing himself in public, parroting Gore’s global warming hoax. 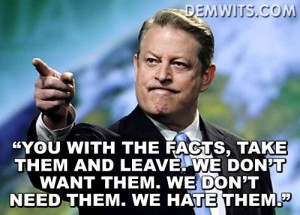 From The Local SE

The coldest temperature so far this winter has been recorded in Nikkaluokta in Lapland in northern Sweden, amid ongoing ice and snow warnings across the country.

Nikkaluokta, which is close to the northern city of Kiruna, set the lowest temperature of the season on Tuesday morning, with mercury levels dropping to -34.8C, almost five degrees colder than forecasters had predicted.
Meteorologists also reported that a national ‘isdygn’ had been recorded over the weekend, a term used to describe a 24-hour period where ice is detected at all major weather stations across Sweden.
“It is when the temperature is below zero at all stations in the country. That was the case during the period beginning on Sunday. Even all the coastal stations recorded below zero,” Marcus Sjöstedt, a forecaster for Swedish weather agency SMHI told Swedish tabloid Aftonbladet.
The latest snow and ice snap still remains a long way from the coldest date recorded in Sweden. Back in 1966 a temperature of -52.6C was measured in Vuoggatjålme in Sweden’s far north.
Meteorologists and doctors have nevertheless warned Swedish residents to be cautious in the coming days as they attempt to enjoy thebelow-freezing weather that is sticking around across much of the country.
Magnus Dyborn, a medical director at a health centre in Härjedalen in the northern Swedish mountains, told skiers to wrap up warm and beware that cold winds could make temperatures feel even lower.
“It can blow sharply up in the mountains even if it is quiet down in the valley. You should keep in mind that you could be stuck in the cold for a while if a lift gets broken,” he told the TT news agency.
Meanwhile, ice skating organisation Friluftsfrämjandet Norrviken warned people not to get too excited about freshly frozen lakes, following a much milder start to the season.
“You should not go out on the ice if you are unsure (…) just because everyone else is doing it, does not mean that the ice is okay,” Anja Noack, a spokesperson for the body told TT.
“I recommend that you check with either an organisation before going out or use a ploughed (pre-prepared) track,” she added.
Dyborn said that people spending time outdoors should wear several layers of breathable clothing as well as an outer shell garment designed to protect them from the wind. He recommended that nature lovers should attempt to keep their fingers, toes necks and heads warm and make an effort to cover their noses and ears.
The doctor also warned Swedes and visitors to look out for signs of frost bite such as a tingling sensation and white patches on their skin. If these are spotted he said attempts should be made “to heat the body part, for example by putting a warm palm on it”.
H/T The Gateway Pundit