Awesome video: African-American church goes all in for The Donald with their official “Day of Endorsement” 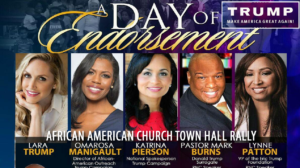 “But, but,but,” worried the non-believers, wringing their hands in abject despair, “minorities hate him. He’s a racist, he’s a bigot, he’s a mean person!”

Thank God that the minorities they denigrate are smarter than the liberal pundits and morons (pardon my redundance) who generalize and insult them.

This is beautiful! An African-American church in Charlotte, North Carolina, Antioch Road to Glory International Ministries, has been a yuuuuuuuge supporter of Donald Trump. The video below is the church’s official Day of Endorsement of The Donald. The entire video is awesome, but I especially enjoyed the segment beginning at the 1:33 mark.

Antioch made its official endorsement of The Donald during its regular church service today. It became a Trumpfest. Dignitaries in attendance were Lara Trump, daughter-in-law of Donald Trump, and the Stump for Trump girls, Diamond and Silk, all native North Carolinians.

According to WSOC TV, “Katrina Rodgers is the daughter of the church’s founder and grew up through the church’s 38-year history.
She said she believes initiatives Democratic presidential candidate Hillary Clinton has supported have hurt the black community the church serves.

“‘It had a rippling effect,” Rodgers said. “Not only did the prison population increase but it brought about division in our homes.’

Rodgers said she knows the move isn’t popular and the church has already been ridiculed for its stance.

‘This is what we feel in our hearts of hearts that is right for us to do so we’re moving forward on that,’ Rodgers said.”