Remember when being a Brownie was all about sewing and baking and socializing with other young girls, and selling cookies door-to-door in the community? Now there is a new Brownie organization in the San Francisco/Oakland area called the “Radical Brownies.” Forget selling cookies! This organization is all about “social justice,” which is slang for racial hatred toward whites. White girls are not allowed in the organization, by the way. And they are claiming that whites are the racists? Really?

According to Conservative Headlines, “the group was founded by Anayvette Martinez and Marilyn Hollinquest, who describe themselves as ‘Queer Women of Color.’ The group says that white girls will be allowed to join in the future, but for now it is just for ‘girls of color.'”

Beyond sickening! I expect the girls to get an invitation to the White House in the near future. 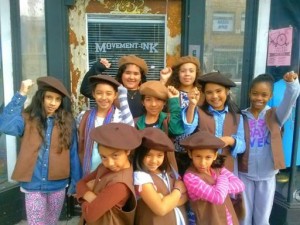 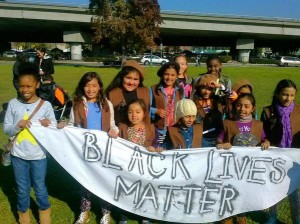 The #BlackLivesMatter racists are now recruiting young black girls in order to spread their hatred of the white man. Another American tradition goes full-blown ghetto thanks to these sick racists.

Now the poor suppressed unprivileged morons have now ruined the Brownies. You know, the once pure organization that was founded to teach young girls morals, love and respect. Now this once admiral organization has turned into crap.

Instead of gathering around eating cupcakes in their classic brownie uniforms the young girls are being brain-washed to hate white people and the police.

“White policeman are killing black young folks such as women, men and children,” one of the girls said.

Another girl said, “Mike Brown. He was shot because he didn’t do nothing. Only the police officer shot him because of his skin color.”

These girls are called the “Radical Brownies.” And instead of learning sewing, they’re learning that the white man is evil.

Even their uniforms have a message.

“The beret, it’s a Black Panther/Brown Beret twist,” one of the Radical Brownies said.

“I think it’s very appropriate. A lot of the work the Black Panthers did was community oriented,” said Radical Brownies co-founder Marilyn Hollinquest. Say what?

This is nothing less than breeding hatred and racism but that, my friend’s is the LEFTIST COMMUNIST SCUMBAG WAY!

Meanwhile the BOY SCOUTS OF AMERICA are allowing gay leaders and scouts- maybe they will learn how to sew instead of hunt, tie ropes and become solid American men- AMERICA HAS BEEN POLLUTED BY LIBERALISM!