Faced with the alternative of watching their children die of thirst or suffer at the hands of ISIS, Yazidi parents are throwing their children from the mountaintop, where they are stranded, surrounded by ISIS. This blood is on Obama's hands for leaving Iraq unprotected, to be overrun by this band of filthy scumbags. I pray that the world can forgive us for Obama's negligence. UPDATE, August 8, 2014, 3PM EST: ISIS has just taken hundreds of Yazidi women captive…

Report from Iraq: families throwing children from a mountain to keep them from terrorists 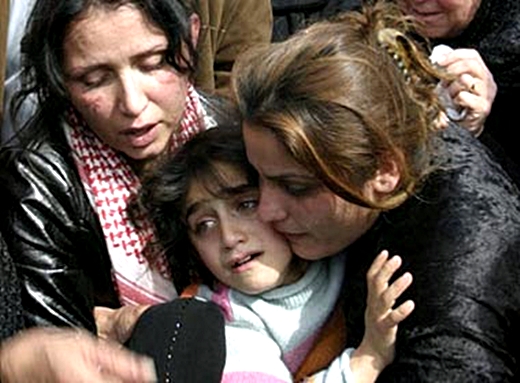 The nightmare that is Iraq gets worse. This was just posted at the CNEWA blog:

This report was sent to us by Ms. Christina Patto, VP Assyrian Aid Society of Iraq. Here what she wrote:

Here is our report and some of our testimony concerning the events happening now in North of Iraq.

It is a tragic situation, nobody can imagine how terrible it is, as much as I write to you and send you reports it will not be enough to describe the suffering of people.

For Zummar and Sinjar: they are under Da’esh control, thousands of Yazidis died in the last two days, they are facing a real genocide. Till yesterday (45) children died of thirst. Some families throw their children from the top of Sinjar mountain in order not to see them die from hunger or thirst, or not to be taken by the terrorists. (1500) men were killed in front of their wives and families, (50) old men died also from thirst and illness. More than (70) girl and women (including Christians) were taken, raped and being captured and sold. More than (100) families are captured in Tel afar airport.

There is about (50) Christian families in Sinjar. The terrorists were able to control the Syriac church there and cover the Cross with their black banner. Till now we do not know anything about those Christian families.

As a reason to the continuous bombing on Telkeif, Deacon (Lujain Hikmat Nano) died, most of the families left their houses and would leave one member of the family in the house, but this tragic led to an exodus from Telkeif. the same thing happened in Shekhan and the surrounded villages (shekhan center, Karanjo, Dashqotan and Ein biqri).

Ba’ashiqa: an exodus from there because there was boming and battles near Ba’ashiqa as the terrorists are trying to control that area too. Ba’ashiqa Monastory is being evacuated from the inhabitants and from IDPs.

Ein Sifni: an exodus of the Yazidi families which forced the christian families to flee too.

Mosul Falls are now under the control of the terrorist, these fall are about (10-15 Km) from Ein sifni.

Batnaye and Tellisquf: also an exodus because of the threats and bad circumstances they are going through.

Our Dorm, the empty houses in the villages, the halls of the churches, school and mosques are full of IDPs and in very bad conditions. I cannot give you the exact number of those families. Also it is very hard to describe their needs in food baskets only, on one can imagine this tragedy, one may cry to see those people in this situation.

Concerning Zakho and Center Duhok: Till now they are under the KRG control.

pls excuse my chaotic writing and expression, we are all in a bad situation.

So, according to my above report, you can decide what kind of aid you can offer.

Stranded on a barren mountaintop, thousands of minority Iraqis are faced with a bleak choice: descend and risk slaughter at the hands of the encircled Sunni extremists or sit tight and risk dying of thirst.

Humanitarian agencies said Tuesday that between 10,000 and 40,000 civilians remain trapped on Mount Sinjar since being driven out of surrounding villages and the town of Sinjar two days earlier. But the mountain that had looked like a refuge is becoming a graveyard for their children.

Unable to dig deep into the rocky mountainside, displaced families said they have buried young and elderly victims of the harsh conditions in shallow graves, their bodies covered with stones. Iraqi government planes attempted to airdrop bottled water to the mountain on Monday night but reached few of those marooned.

“There are children dying on the mountain, on the roads,” said Marzio Babille, the Iraq representative for the United Nations Children’s Fund (UNICEF). “There is no water, there is no vegetation, they are completely cut off and surrounded by Islamic State. It’s a disaster, a total disaster.”

Most of those who fled Sinjar are from the minority Yazidi sect, which melds parts of ancient Zoroastrianism with Christianity and Islam. They are considered by the al-Qaeda-inspired Islamic State to be devil worshippers and apostates….

…“Children have died because of dehydration and lack of food,” Vian Dakheel, a Yazidi parliamentarian from Sinjar, said through tears. “My people are being slaughtered,” she continued, referring to reports of mass killings of those who had stayed behind.