Our Phony-in-Chief tells illegal aliens, “We are very proud of you.”….

My biggest problem with this is that these illegals are allowed to camp on the National Mall, apparently for as long as they like. Not only are they not harassed and threatened, which was the treatment our veterans received when they visited the capital, but visited and encouraged by leftist government officials, including our (holding my nose) President and First Lady. Decent patriots are now outlaws and criminals are revered. The world is upside down. 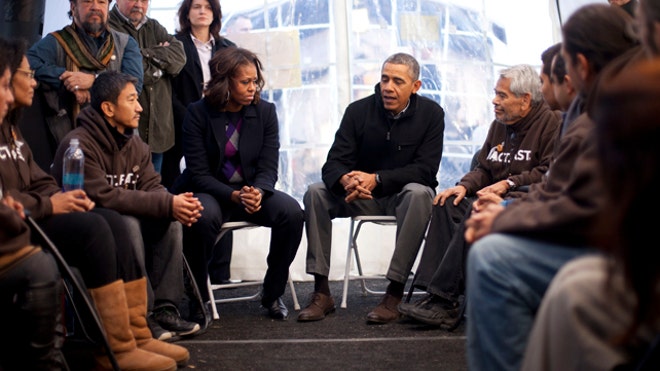 On the day after Thanksgiving, Obama and First Lady Michelle Obama stopped by the tent where 10 activists have shunned all food except water for the past 18 days. The demonstration is called the “Fast for Families” and includes Eliseo Medina, a top labor organizer with the Service Employees International Union (SEIU).

Obama told the activists that he appreciated their efforts.

“We are very proud of you,” Obama told the activists on behalf of his administration.

“I remain optimistic that we’re going to get this done. It’s more of a question of when not if. But I’d rather get it done sooner rather than later because each day, obviously, it’s not done makes it more difficult because we still have a system that’s not working for too many people.”

The president also reiterated his view that there is still time this year for the House to pass legislation. “Nothing is more powerful than an idea whose time has come,” he said.

House Speaker John Boehner has refused to schedule votes on a comprehensive immigration measure the Senate passed this summer.

Organizers issued a call for citizens all across the United States to ask Boehner to back down and unblock the road to immigration reform that would regularize the status of some 11 million people in this country. Though many of the activists have set out to fast for 40 days, according to “FAST ACTION For Immigration Reform,” some are committing to just a few days or even hours.

Boehner has opted for a piecemeal approach. But that process has moved too slowly to satisfy immigration advocates.

“Any sacrifice is small and is not comparable to that of the immigrants who lose their lives in the desert seeking a better future or whose families suffer deportation,”

The Senate passed a bipartisan immigration reform bill in June that would tighten enforcement and provide a path to legal status for undocumented immigrants.

From their “occupation” tent, which is little more than a Democrat voter recruiting prop, the Obamas lauded the noble efforts of the criminals. “What moves us is the hunger for justice,” said Eliseo Medina, secretary-treasurer of the Service Employees International Union, who has lost 20 pounds (9.1 kg) so far during the protest. GMAFB! Yo, Eliseo, there is a legal channel to citizenship. You should check it out. It is probably cheaper than the going rate for illegal “coyote” transport, and you won’t have to starve, camping on the National Mall.

Considering Eliseo’s weight-loss success on the illegal alien starvation diet, he and his tentmates can expect a visit very soon from the staff of The Biggest Loser.

And before you liberal trolls come out of the woodwork to tell me what I racist I am, please keep in mind that I am very happily married to a (legal) Tex Mex girl, making our children 50% hispanic. So, please save it. Go find a liberal blog to troll. Oh, that’s right, there aren’t any.