Obamacare: “The age-old question: What if we hold a war and nobody comes?” Of course, Obama’s answer is “you will be fined.” What if you refuse to pay? The IRS is running Obamacare and they WILL seize your bank account. What if you refuse to have a bank account? The levels we are being forced to go to to keep the federal government out of our lives are becoming increasingly difficult….

EXCLUSIVE: Less than 1% of visitors are signing up for Obamacare on state health exchange websites

California, the ultimate blue state whose federal lawmakers voted overwhelmingly in support of Obamacare, turned less than 1 per cent of its Web visits into ‘Covered California’ participants on Tuesday.

‘We had over 5.7 million hits to our website as of 3 p.m. yesterday,’ Covered California spokeswoman Kelsey Caldwell told MailOnline Wednsday.

‘7,700 consumers began their application process yesterday. … 4,143 applications are pending,’ she added. ‘We received 23,269 calls yesterday to our service center.’

Caldwell couldn’t say how many of the 5.7 million website hits were from unique Californians. But assuming 712,500 online visitors saw eight different Web pages each, the sign-up rate was 0.58 per cent. 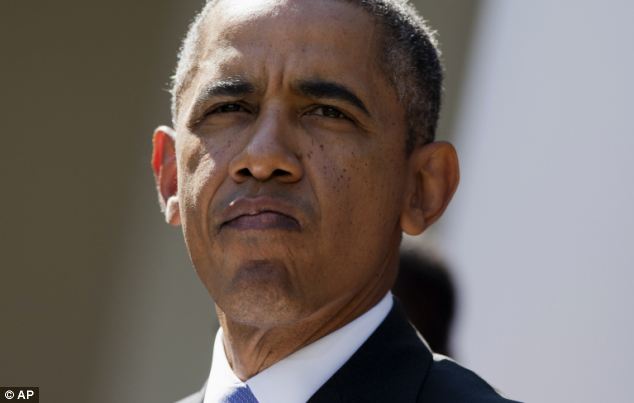 Obama-prayer? The White House is hoping millions of Americans will sign up for government-brokered health insurance, but so far there’s no indication that the throngs of website lookie-lous are applyling

That indicates just 0.59 per cent of Connecticut residents who sought information about their state’s Obamacare program on Monday decided to become part of it, according to Access Health CT spokeswoman Kathleen Tallarita.

New York Department of Health executive director Donna Frescato said in a statement that ‘more than 12,000 business owners and individuals from across the state have shopped online for low-cost health insurance plans … and the site has received nearly 30 million web visits.’

Los Angeles mayor Eric Garcetti urged Californians to enroll inhealth care insurance through the Covered California program, but his pleas may be falling on deaf ears.

A spokesman didn’t respond to a request for clarification about whether those 12,000 people completed applications for health coverage. If they did, and if each ‘web visit’ corresponded to a New Yorker who saw 8 pages, the state’s enrollment rate would be the lowest of all – 0.32 per cent.

The low numbers of new enrollees stand in stark contrast to the robust website traffic statistics, suggesting that day-one anxieties about non-functioning online portals may have been overblown.

Only 14 states have opted to run their own health insurance exchanges . The U.S. Department of Health and Human Services is handling signup duties for the other 36 states and the District of Columbia.

‘Starting today,’ President Obama said Tuesday during a White House Rose Garden event, ‘you and your friends and your family and your coworkers can get covered, too. Just visit healthcare.gov, and there you can compare insurance plans, side by side, the same way you’d shop for a plane ticket on Kayak or a TV on Amazon.’

But his administration isn’t saying how many Americans signed up online so far.

Access Health CT, the Connecticut state Obamacare insurance exchange, signed up just 167 members of the public on the first day of open enrollment, despite reports that the website was available and loading quickly.

‘Americans across the country – millions of Americans – are taking advantage of the opportunity to shop for affordable health insurance that they could not attain before now,’ White House Press Secretary Jay Carney insisted on Monday.

But without enrollment figures, it’s impossible to know whether Obamacare is seeing a flood of new customers or just a trickle.

The White House did not respond to a request for those numbers. 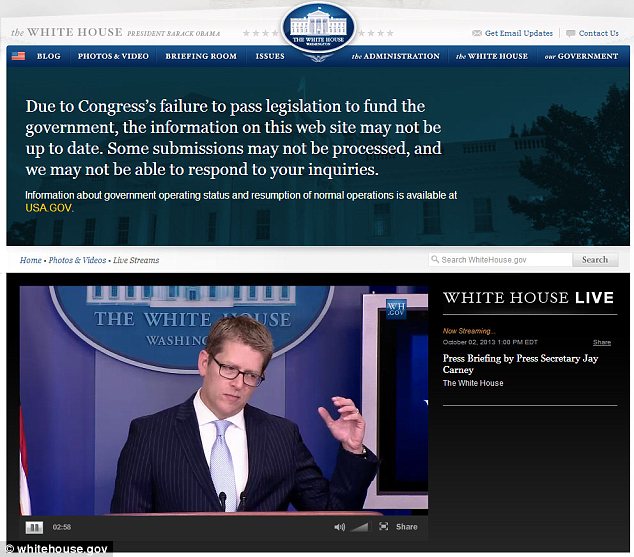 Shutdown mashup: White House Press Secretary Jay Carney briefed reporters on Wednesday, live-streamed on a website that the administration complained was partially inactive due to the government’s slimmed down operations.

Staff at the Community Health Center in New Britain, Connecticut wore ‘Get Obamacare’ buttons during a launch event on Tuesday, but only 167 people statewide signed up that day

Vermont’s participation rate is no more than 6 per cent, although that number may be deceiving.Emily Yahr, a public Information officer with Vermont Health Connect, told MailOnline that her state exchange’s website had served ‘about 20,300 unique visit[or]s,’ resulting in ‘just over 1,230 user accounts established.’

But she couldn’t say how many people submitted completed applications.

Washington, D.C. government spokesperson Richard Sorian said Wednesday that 15,452 unique visitors had seen his agency’s DC Health Link website, and that new accounts were created for 4,171 individuals and families, and 136 small businesses – a rate of nearly 28 per cent.

He, too, offered no numbers showing how many of those users applied for health insurance after they created accounts.

But Sorian did suggest that number was not as impressive. ‘We don’t expect people to fully enroll this early,’ he said.

Minnesota’s health insurance administration, MNSure, also said it had ‘no enrollment numbers yet.’

But spokeswoman Jenni Bowring-McDonough said the state’s insurance exchange website was seeing an average of 50,000 hits on its website every hour since it launched – a 24-hour average of 1.2 million – from Minnesotans. Just 2,500 new accounts resulted.

At an estimated 8 pages per visitor, that’s an account-creation rate of less than 1.7 per cent. The number of actual applications would have been lower still.

In a statement, the New Mexico Health Insurance Exchange reported that 292 businesses had enrolled in its coverage plans but wouldn’t say how many individual taxpayers are taking part.

‘We don’t have any of those numbers yet,’ said spokeswoman Annie Holschuh.

Media representatives for health insurance exchanges in Maryland, Oregon, Colorado, Idaho and Hawaii did not respond to requests for enrollment statistics.

Massachusetts is running its own exchange but is expected to sign up few new enrollees since an existing program, created by former Governor Mitt Romney, already covers most state residents.