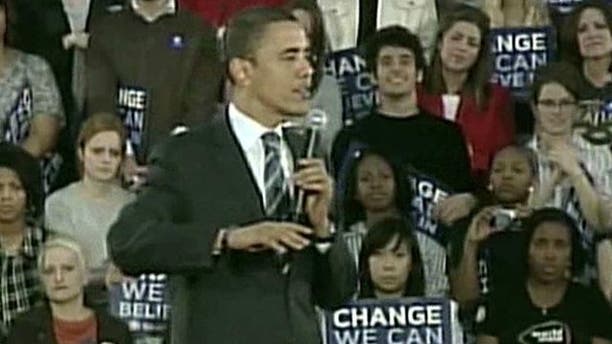 A jury in South Bend, Indiana has found that fraud put President Obama and Hillary Clinton on the presidential primary ballot in Indiana in the 2008 election. Two Democratic political operatives were convicted Thursday night in the illegal scheme after only three hours of deliberations. They were found guilty on all counts.

Former longtime St. Joseph County Democratic party Chairman Butch Morgan Jr.  was found guilty of felony conspiracy counts to commit petition fraud and forgery, and former county Board of Elections worker Dustin Blythe was found guilty of felony forgery counts and falsely making a petition, after being accused of faking petitions that enabled Obama, then an Illinois Senator, to get on the presidential primary ballot for his first run for the White House.

Morgan was accused of being the mastermind behind the plot.

According to testimony from two former Board of Election officials who pled guilty, Morgan ordered Democratic officials and workers to fake the names and signatures that Obama and Clinton needed to qualify for the presidential race. Blythe, then a Board of Elections employee and Democratic Party volunteer, was accused of forging multiple pages of the Obama petitions.

“I think this helped uphold the integrity of the electoral system,” the prosecutor, Stan Levco told reporters.

“Their verdict of guilt is not a verdict against Democrats, but for honest and fair elections,” he said.

The scheme was hatched in January of 2008, according to affidavits from investigators who cite former Board of Registration worker Lucas Burkett, who told them he was in on the plan at first, but then became uneasy and quit. He waited three years before telling authorities about it, but if revelations about any forgeries were raised during the election, the petitions could have been challenged during the contest. A candidate who did not qualify with enough legitimate signatures at the time, could have been bounced from the ballot.

The case raise questions about whether in 2008, then candidate Obama actually submitted enough legitimate signatures to have legally qualified for the primary ballot.

“I think had they been challenged successfully, he probably would not have been on the ballot,” Levco told Fox News.

Under state law, presidential candidates need to qualify for the primary ballots with 500 signatures from each of the state’s nine congressional districts. Indiana election officials say that in St. Joseph County, which is the 2nd Congressional district, the Obama campaign qualified with 534 signatures; Clinton’s camp had 704.

Prosecutors say that in President Obama’s case, nine of the petition pages were apparently forged. Each petition contains up to 10 names, making a possible total of 90 names, which, if faked, could have brought the Obama total below the legal limit required to qualify. Prosecutors say 13 Clinton petitions were apparently forged, meaning up to 130 possibly fake signatures.  Even if 130 signatures had been challenged, it would have still left Mrs. Clinton with enough signatures to meet the 500 person threshold.

Levco said a total of “100 to 200” signatures had been forged on Obama’s and Clinton’s petitions.

An Indiana State Police investigator said in court papers that the agency examined the suspect Obama petitions and “selected names at random from each of the petition pages and contacted those people directly. We found at least one person (and often multiple people) from each page who confirmed that they had not signed” petitions “or given consent for their name and/or signature to appear.”

“That’s not my signature,” Charity Rorie, a mother of four, told us when we showed her the Obama petition with her name and signature. She was stunned, saying that it “absolutely” was a fake.

Charity told Fox News that her husband’s entry was also a forgery, and that they have never been contacted by investigators or any authorities looking into the scandal.

“It’s scary, it’s shocking. It definitely is illegal,” she told us.

Robert Hunter, Jr. told Fox news that his name was faked, too.

“I did not sign for Barack Obama,” he told us. As he examined the Obama petition in his hands, Hunter pointed out that “I always put ‘Junior’ after my name, every time…there’s no ‘Junior’ there

Even a former Democratic Governor of Indiana, Joe Kernan, told Fox News that his name was forged.

Nees said the multiple guilty verdicts were “bitter, because a five-person conspiracy succeeded in illegally placing two presidential candidates on the ballot, but sweet because they were exposed, tried for their crimes, and convicted.”

Nees previously told Fox News that the fraud was clearly evident, “because page after page of signatures are all in the same handwriting,” and that nobody raised any red flags “because election workers in charge of verifying their validity were the same people faking the signatures.”