King Hussein has found another ideal recruiting ground for Obamacare. He has already corralled illegal aliens, signing them up as soon as they seek public assistance. Now prison inmates are being rewarded with free healthcare, not only while incarcerated, but also when they are released. The last paragraph says it all. The states are being made an offer they can't refuse. The feds are picking up 100% of the cost. What's not to like? Unless you happen to be a taxpayer, of course….

Inmates getting coverage under ObamaCare, as states shift cost to feds 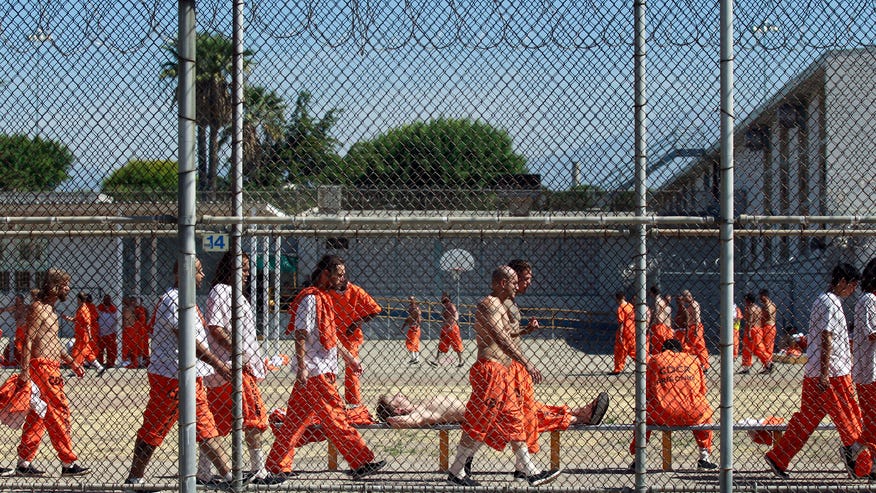 June 3, 2011: Inmates walk around an exercise yard at the California Institution for Men state prison in Chino, California.REUTERS

WASHINGTON –  The Obama administration often touts that people with pre-existing conditions and countless others can now get covered under ObamaCare. But there’s another group that’s starting to benefit from the law — prison inmates.

Cash-strapped state and local prisons increasingly are using the Affordable Care Act to pay for their inmates’ medical costs, taking advantage of a little-known provision that lets them shift some of those expenses to the federal government.

Ohio, Illinois and Iowa are among the states trying to offload the rising costs of health care – which include mental health programs – by enrolling inmates into a new expanded Medicaid program when they get sick.

But it doesn’t stop there. The states also are working to enroll them even before they’re released from prison, so they have coverage when they get out.

Currently, 26 states and the District of Columbia are proceeding with a Medicaid expansion which allows them to extend medical coverage to single and childless adults. Jail operators in at least a half-dozen of those states are then, using that criteria, extending coverage to inmates. The shift means the federal government would pay some emergency costs that used to be entirely covered by the states and counties — plus, inmates are starting to get coverage for when they leave.

Proponents of shifting prisoners into the expanded Medicaid — in turn giving them access to health care, including mental health and rehab services, when they are released — say this reduces recidivism. Others, though, argue that federal taxpayer dollars shouldn’t be used to foot the multibillion dollar bill.

“The political element of ObamaCare is that we were helping what we called the deserving poor or what we used to call the deserving poor,” Manhattan Institute fellow Avik Roy told Fox News. “A group of people who are just down on their luck … bring them the opportunities they need to get ahead and get back on their feet. And sometimes that’s true of people who served time in prison, and sometimes it’s not.”

Former Sen. Kent Conrad, a Democrat from North Dakota who was on the Senate Finance Committee when ObamaCare passed, put his concerns bluntly in an interview with Bloomberg.

“It starts to look a little like a scheme by the states and local jurisdictions to avoid responsibilities that are really theirs,” he said.

But for cash-strapped states that have figured this out, sending inmates onto the federal rolls may be hard to pass up — a Pew study of 44 states found that in 2008, prisoner health costs hit $6.5 billion. Further, the benefits for inmates can be significant.

Unlikely to be able to afford private health care coverage when they are released, many inmates previously were unable to get covered. Pre-ObamaCare, Medicaid, a federally funded health option, was available to five categories of people: children below a certain age, the disabled, seniors, pregnant women and parents of Medicaid-eligible children (though some states offered it to more groups).

The ObamaCare expansion extends eligibility to single and childless adults. As for when they’re still in jail, while Medicaid does not cover standard health care for inmates, it does pay for hospital stays off-site lasting more than 24 hours. For example, it would pay for complicated in-patient surgeries or stays in a psychiatric facility.

Roy argues that offering health care at a local level is often more efficient and more productive than handing off the responsibility to the federal government. He calls the Medicaid system “poorly designed and poorly structured.”

But states say freeing up millions in their recession-depleted budgets is worth it.

Cook County, the largest single-site jail complex in the United States, has started more than 13,000 insurance applications since last April. Once prisoners there are booked, fingerprinted and assigned a cell, they meet with a worker from Treatment Alternatives for Safe Communities who helps them apply for Medicaid.

More than 2,000 prisoners already have gone on to receive coverage after their release, Marleza Jentz of the sheriff’s public policy office said.

Jails in California reportedly also are looking at making this shift. And in Iowa, state correction officials and human services departments are setting up a plan to enroll inmates in their public health insurance program before they are released from prison.

Prison officials will likely help inmates complete their applications shortly before they are released. Prison administrators will then send the applications to human services officials who will complete the process and ensure inmates are covered when they are paroled or finish their sentences.

Iowa releases about 4,000 prisoners a year.