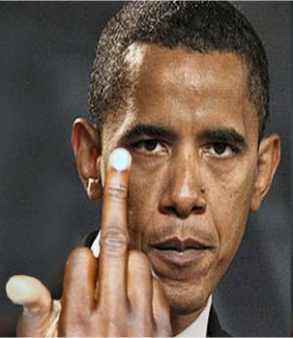 From Western Journalism
Pay no heed to the media blackout. The far left knows that the impeachment of Barack Hussein Obama is on the table. As WorldNetDaily (WND) notes: “Suddenly, millions of Americans talking about ousting [Barack Obama].”

But whether or not impeachment happens sooner, rather than later, is up to you and we want to start the New Year off on a country-saving note and send the spineless, self-proclaimed leaders in Congress a message from grassroots Americans like you. The American people want Barack Obama removed from officeNOW.

The implementation of ObamaCare is a man-made disaster. A dictatorial imposter has usurped the constitutional authority an office he should not hold one too many times and he plans to keep usurping the authority of the highest office in the land.

Tyranny and insanity reign. We now live in a country in which an illegal alien is allowed to practice law in the State of California. It’s now “legal” to smoke marijuana in Colorado and a dictatorial regime fights tooth-and-nail to force an order of nuns to either violate their religious convictions and support abortion or close up shop and go out of business.

Make no mistake, the law has been turned on its head and is becoming a farce. A tyrannical regime is out of control and their is only one constitutional remedy for restoring our great Republic.

And this solution is inevitable. As the “paranoid” email from the DNC illustrates, even Barack Obama’s allies see the handwriting on the wall; and, at some point, our elected officials are going to be forced to face the eventuality that Barack Obama must be removed from office, and they must face that eventuality sooner, rather than later.

Aaron Klein with WND points out: “The White House and progressive machine clearly have failed in their attempt to paint the impeachment movement as fringe and out of touch with reality. The general American public views with increasing concern Obama’s illicit extension of executive authority, his repeated bypassing of Congress and the many serious scandals that have plagued this administration from Fast and Furious through Benghazi through the IRS fiasco and now ObamaCare.”

Klein added: “The time has come for the country and our elected representatives to have a serious discussion about the constitutional ramifications of Obama’s highly questionable actions.”

How Long Must We Wait?

How long must we wait… how long should we sit back and permit Barack Hussein Obama to continue to rip apart the fabric of this country before we take action?

You don’t have to wait. Starting right now, you can fire a shot across the bow… a shot that will be heard around the world… and send Barack Hussein Obama a clear and unmistakable message that he does not have carte blanche to ruin the United States of America.

Like so many on the far-left before him, going all the way back to Karl Marx, Barack Hussein Obama believes that it’s his mission to promote “equality of outcome” (in a just world, the misery of the few must be shared by all) over “equality of opportunity” even if Americans must learn to live in chains to make it happen.

And that worldview makes Barack Hussein Obama a very dangerous man and one of the greatest threats to your personal liberty today.

What can we do to stop this monomaniac… this American dictator? There’s only one answer.

Article II, Section 4 of the Constitution reads: “The President, Vice President and all civil officers of the United States, shall be removed from office on impeachment for, and conviction of, treason, bribery, or other high crimes and misdemeanors.”

ObamaCare is only a symptom. The Obama presidency is the disease, and Article II, Section 4 of the Constitution, is the cure.

To answer those questions, we really need to address the often misunderstood subject of what exactly constitutes an removeable offense, in order to illustrate that Barack Hussein Obama’s actions are grave enough to warrant removal.

Let’s look at Article II, Section 4 of the Constitution again:“The President, Vice President and all civil officers of the United States, shall be removed from office on impeachment for, and conviction of, treason, bribery, or other high crimes and misdemeanors.”

The key phrase here is “high crimes and misdemeanors,” a phrase grounded in English Common Law that was well-known to our Founding Fathers but is grossly misunderstood in this day and age.

Here’s a passage from C-Span.org which succinctly and beautifully summarizes the historical significance surrounding the inclusion of the term “high crimes and misdemeanors” in the Constitution:

“‘High crimes and misdemeanors’ entered the text of the Constitution due to George Mason and James Madison. Mason had argued that the reasons given for impeachment – treason and bribery – were not enough… so Mason then proposed ‘high crimes and misdemeanors,’ a phrase well-known in English common law. In 18th century language, a ‘misdemeanor’ meant ‘mis-demeanor,’ or bad behavior.”[Emphasis Ours]

In other words, “high crimes and misdemeanors” does not refer to a ‘high’ or ‘lofty’ criminal act (as some would lead you to believe).

It refers to a misdeed committed by a person occupying a high office and the Founders fully intended to allow for the removal of the President for actions which were… well… simply put… egregious… grossly incompetent… grossly negligent… outright distasteful… or, in the case of Barack Hussein Obama, actions which clearly show malevolence toward this country, which is unabated.

As C-Span.org notes: “The Framers of the Constitution deliberately put impeachment into the hands of the legislative branch rather than the judicial branch, thus transforming it from strictly a matter of legal definition to a matter of political judgment.”

The Obama Administration exemplifies maladministration. It qualifies as the poster-child for bad behavior. Obama and those around him are ravaging this great country and adding a sorry chapter to a noble history, andremoval, as written in the Constitution, was tailor-made for Barack Hussein Obama and our Founders placed it in our Constitution for such a time as this.

It could be easily argued that we have a duty to remove Barack Hussein Obama. Of course, our elected officials won’t have the back-bone to go it alone. That’s where you come in.

Help us spread the word far-and-wide and our elected officials will come to know that the removal of Barack Hussein Obama is the will of the American people and that if they ignore the will of the people. they do so at their own political peril.