I have never been crazy about golf. I have tried it several times and tried really hard to like it. It just never worked. I have many friends who are avid golfers. I always figured that I must be missing something. Now I see what it was. Slam-ass PARTY!….

From The Daily Mail, UK

Golf may not match the pneumatic, high-octane pizzazz of the NFL, but this weekend the Presidents Cup witnessed some illicit entertainment as a patriotic streaker gatecrashed the 18th hole and managed to evade law enforcement at Muirfield Village Golf Club in Dublin, Ohio.

As American Captain Fred Couples stared on with a bemused look on his face, the red-haired fairway invader charged down the final hole of the 2013 Presidents Cup on Sunday basically nude bar a thong and heart-shaped American flags covering either side of her chest.

Bringing excitement to golf’s more sedate sensibilities, the streaker unfurled an American flag for part of her performance as police tried to grab her but missed and some reports said that she may have escaped any brush with the law altogether. 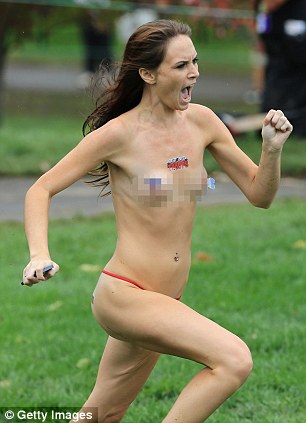 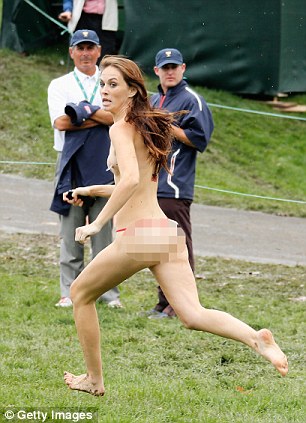 Victory: A streaker runs on the 18th hole during the Day Four Singles Matches at the Muirfield Village Golf Club on October 6, 2013  in Dublin, Ohio as American Captain Fred Couples (second from right in baseball cap watches) 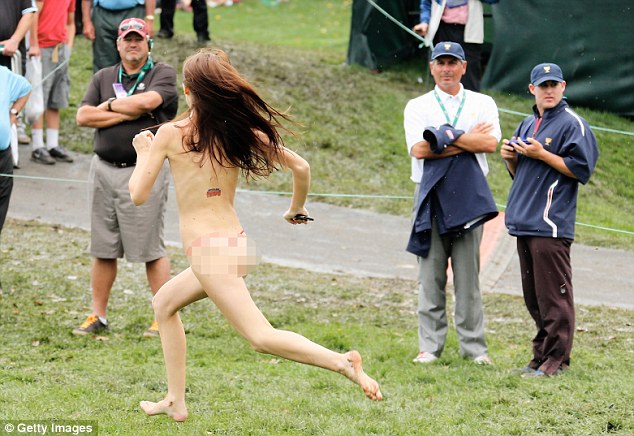 Hey! A streaker runs past U.S. Team Captain Fred Couples on the18th hole during the Day Four Singles Matches at the Muirfield Village Golf Club on October 6, 2013 in Dublin, Ohio 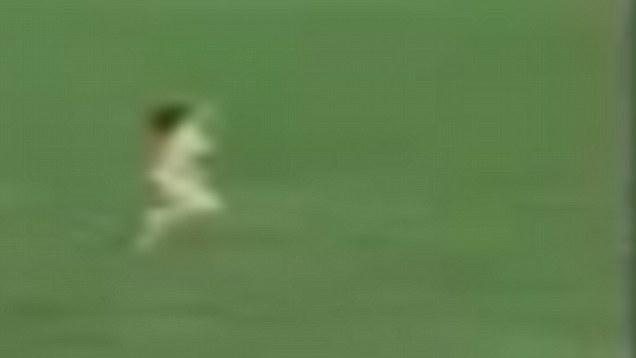 Photographed around 2 p.m. as she burst onto the fairway, the female streaker was not short of encouragement as one fan reportedly yelled out ‘God bless America!’

It was also reported that the woman was sporting a message on her back that read, ‘Support Our Troops.’

Possibly encouraged by the victory of the American team in the Presidents Cup, the streaker managed to escape into the woods and some remarked that if she had stashed her clothes in a good place then she may have been able to walk straight out of the Muirfield Village Golf Club in Dublin, Ohio.

The United States won the Presidents Cup for the eighth time, beating the Internationals 18.5 to 15.5. 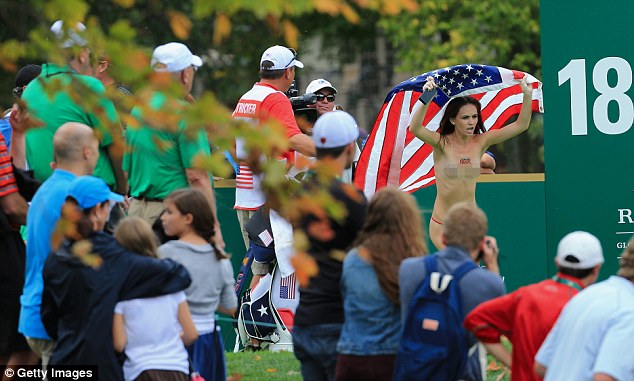 Star Spangled Banner: The streaker runs on the 18th hole during the Day Four Singles Matches at the Muirfield Village Golf Club in Dublin, Ohio today 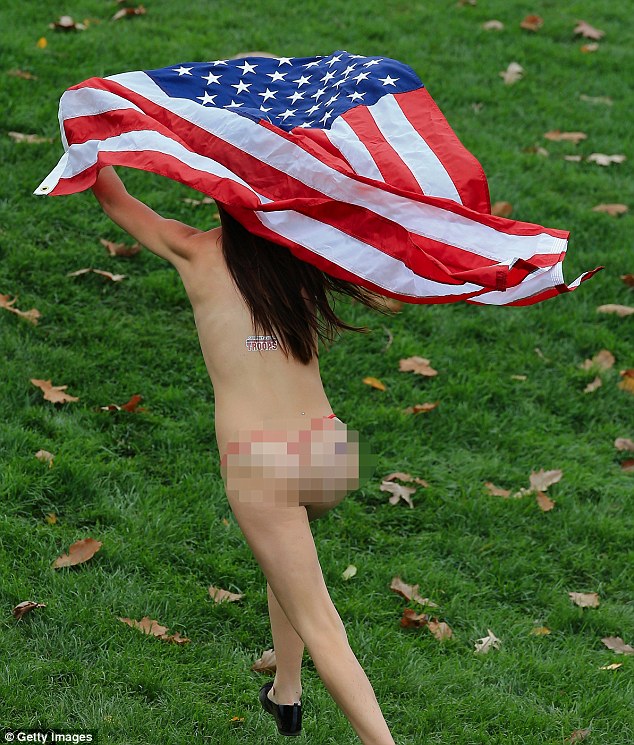 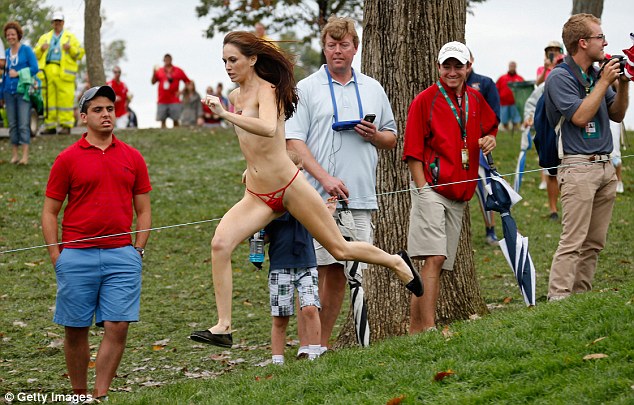 Bounding: The streaker runs on the 18th hole during the Day Four Singles Matches at the Muirfield Village Golf Club on October 6, 2013 in Dublin 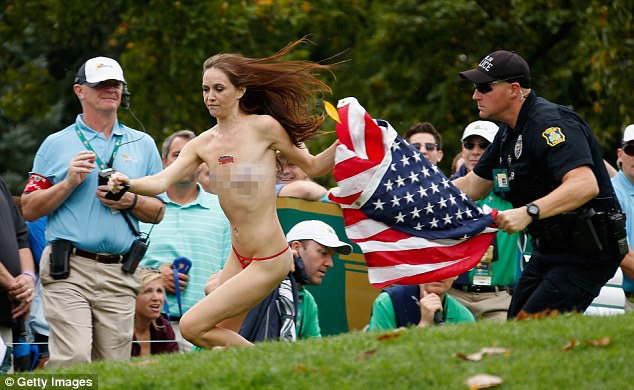 Catch Me If You Can: The streaker manages to evade law enforcement as they come to try and stop her on Sunday at the Presidents Cup 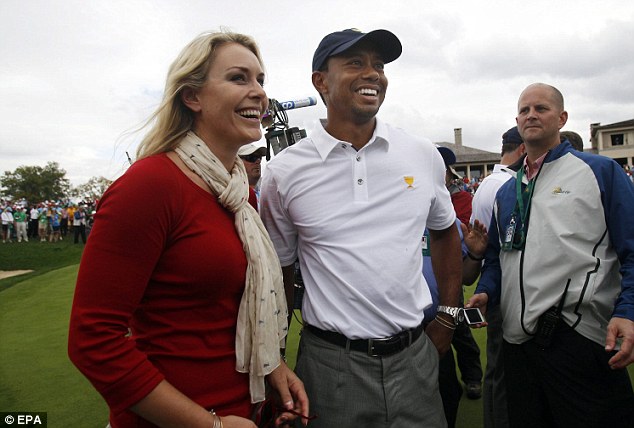 Victorious: US Team member Tiger Woods (C) poses with his girlfriend Lindsey Vonn (L) during the US victory celebration of the Presidents Cup golf tournament at the Murfield Village Golf Club in Dublin, Ohio, USA, 06 October 2013

In what has been a thoroughly enjoyable weekend for the United States, the entire team was reduced to hysterics on Friday when Olympic skier, Lindsey Vonn, placed team mascot, Sammy the squirrel on her boyfriend Tiger Woods’ shoulder in a funny prank.

Video footage captured the moment Vonn pulled the squirrel out of Love III’s trouser pocket before surreptitiously placing it on 37-year-old Woods’ neck.

Woods, who was focused on the golfers still on the green, initially brushed his shoulder until he realized what was sitting on him. 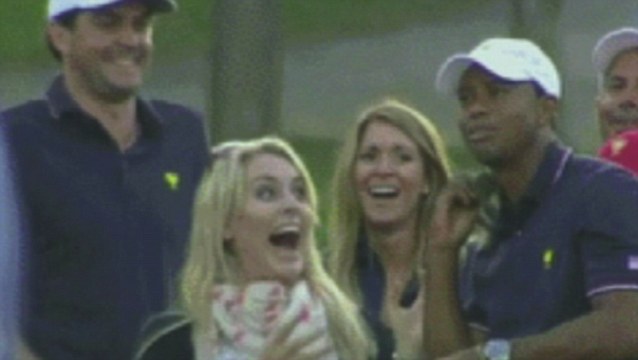 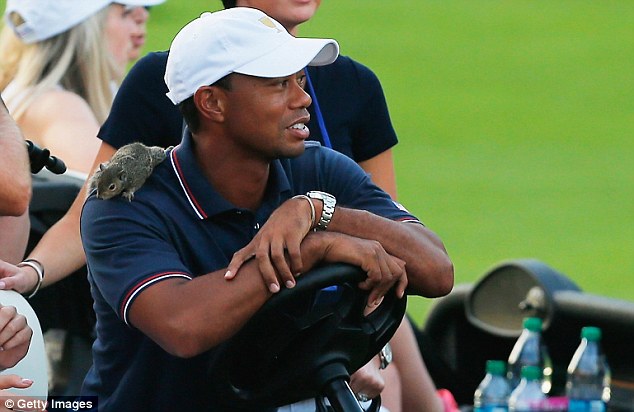 Friendly: Tiger Woods warmed up to the idea of carrying a real squirrel on his neck during the Day One Four-Ball Matches at Muirfield Village Golf Club 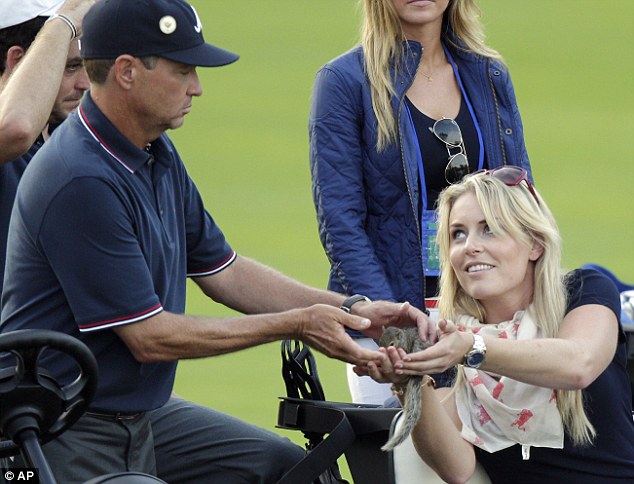 Sneaky: Davis Love III handed ‘Sammy the squirrel’ to Lindsey Vonn before she secretly placed it on her boyfriend Tiger Woods’ shoulder

The world number one appeared rattled at first, before smiling broadly, to the delight of his 28-year-old girlfriend.

Before heading to Minnesota today, Vonn tweeted to Love: ‘Keep the squirrel happy until I get back tomorrow. :)’