Harry Reid isn’t crazy about Obamacare after all….

Oh, it’s OK to shove down the throats of the commoners, but not for beltway royalty like Dirty Harry, who has to pay more for inferior coverage. So, Harry, what happened to your savior’s promise that insurance rates would decrease as a result of Obamacare?

Attempting to justify his premium increase under Obamacare, Dirty Harry told the Reno Gazette Journal, “Under Obamacare, my insurance costs me about $4,500 more than it did before, because it is age-related and it wasn’t like that before.”

You sure about that, Harry? Could the increased premium for inferior healthcare have anything to do with you and your wife being required, under the genius we call Obamacare, to carry maternity coverage, contraceptives, pre-natal care, baby care, and much more that you and your bride certainly need? 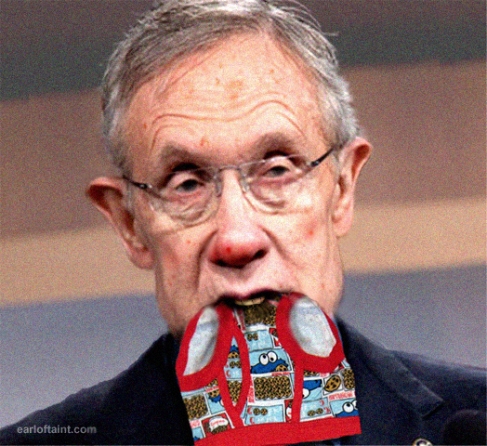 It has been rumored that when Dirty Harry gets mad he verbally abuses everyone within ear shot, but when he gets REALLY mad he eats toddler briefs.

Describing his honest, decent, law-abiding ways, Dirty Harry commented, “I followed the Affordable Care Act. It is the law. The law says that if you have committee staff, leadership staff, they stay where they are. If you have other staff, which is most everyone, they go to the exchanges.” He failed to mention that King Hussein illegally moves the goalposts and alters the ALREADY passed law any time he chooses to favor his pals, clearly usurping the authority of Congress, a Congress which apparently, like King Hussein, doesn’t give a shit about our Constitution and its clearly delineated balance of power directives.

And being a multi-millionaire, poor Dirty Harry doesn’t qualify for subsidies to soften the blow of his nearly $400 a month premium increase under Obamacare…. FOR INFERIOR HEALTHCARE!!

It has to be pretty embarrassing for Dirty Harry, considering his loyal support for the train wreck the rest of the country calls Obamacare, and especially after the promises his bookend leftist, Nutjob Nancy, made, telling Meet the Press last year that “everybody would have lower rates” under Obamacare, a statement she made on national TV, which she characteristically later denied having made.

Watching you beltway boneheads is more fun than watching The Three Stooges.