Awesome!!!! Delegates from 29 states are meeting in Indiana to discuss and plan for a Convention of States. Washington is completely out of control. It appears that EVERYTHING that is done inside the beltway is counter to the benefit and welfare of the American people. The foresight of our divinely-inspired founders included Article V in our Constitution, allowing the states to go around Congress and the President, and amend our Constitution on their own. If I could write one amendment, it would be to repeal the 26th Amendment, and replace it with an amendment addressing the very serious problems we are having with our voting system. Our poorly-written voting laws and our corruptible voting system are the source of most of our problems. Fix our voting system and most of our other problems disappear. My Constitutional amendment would make the minimum voting age 25; voter ID would be an absolute requirement; absentee voting would be restricted to an absolute minimum; those on public assistance would not be eligible to vote; the current, compromisable electronic voting system would be replaced with a secure, incorruptible, uncompromisable system…. 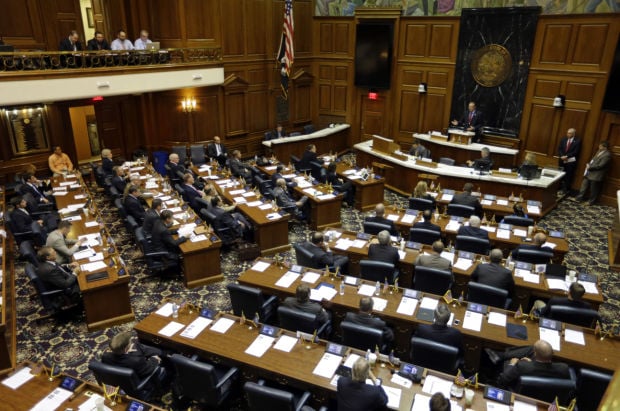 David Long, Indiana Senate president pro tempore, welcomes delegates Thursday during a meeting to set up the framework for states to amend the U.S. Constitution at the Statehouse in Indianapolis.

INDIANAPOLIS | Representatives and senators from 29 states met Thursday in the Indiana Statehouse to begin planning for the first state-led revisions to the U.S. Constitution since the nation’s fundamental governing document was enacted in 1789.

The significance of the work undertaken by The Mount Vernon Assembly to prepare for a future Convention of the States was not lost on the 94 official and participating delegates, mostly Republicans, who filled the House chamber.

“Nothing like this has occurred in over two centuries, though certainly the founders of this nation assumed it would have happened long ago,” said Indiana Senate President David Long, R-Fort Wayne, an organizer of the meeting.

Article V of the U.S. Constitution requires Congress call a Convention of the States for proposing constitutional amendments if legislatures in two-thirds of the states (34 states) request one. If the convention approves an amendment, it then can be ratified by three-fourths of the states (38 states) and added to the Constitution without additional congressional approval.

However, because an Article V convention never has been called, there are no clear procedures on how it would begin, what rules the convention would follow or whether it could be limited in scope.

The Mount Vernon Assembly, which organized last December at George Washington’s Virginia estate and is planning to change its name to the Assembly of State Legislatures, has taken it upon itself to start answering those questions to ensure a future Convention of the States gets off on the right foot.

“It has been a failure on the part of state legislatures for not stepping up for the past 200 years and saying, here’s how we’re going to do it, so that’s what we’re doing,” said state Rep. Chris Kapenga, a Wisconsin Republican.

“It’s time we accept the responsibility given us because there’s little debate in state legislatures, or in the public, that something’s not right in Washington.”

Throughout the morning, delegates discussed their organizing principles and whether they were being too deliberate in their planning.

Kapenga pushed back on the few lawmakers who wanted to jump ahead to debating amendment proposals that someday could be considered by a Convention of the States.

In the afternoon, delegates organized into four committees to begin tackling detailed planning questions for a Convention of the States, including how many delegates each state should have, whether states must send Congress an identical request and whether past state calls for Article V conventions, such as those submitted by Indiana in 1861 and 1979, are still valid.

State Sen. Jim Arnold, D-LaPorte, was appointed co-chairman of the Judiciary Committee. He will help shape answers to those questions and others ahead of the assembly’s December meeting, where its proposed rules for a Convention of the States will be approved.

Ultimately, the Convention of the States, if one ever is called, must decide whether to accept the rules and procedures proposed by the Assembly of State Legislatures.

Long said regardless of that decision, the work of planning and preparing for a convention has reminded states of their rights under America’s federalist system of government and their role in the constitutional amendment process.

“States’ rights has never been, nor should it ever be, a partisan issue,” Long said. “It is instead a constitutionally based concept that has made us the great country that we are today — 50 independent states, governed separately but united together.”