WARNING! Liberals reading this article…. proceed with extreme caution, this article contains facts. If you begin weeping uncontrollably, notice steam escaping from your ears, or exhibit other symptoms of factose intolerance, cease reading immediately, call 911, and immediately place your head in a tub of ice water. If a tub of ice water is not immediately available, find the nearest toilet. DO NOT remove your head from the toilet until medical assistance arrives….

The Bureau of Land Management’s ongoing dispute with cattle rancher Cliven Bundy has supposedly been waged over unpaid grazing fees. Bundy’s cattle is said to have grazed in protected areas regulated to preserve endangered species, chiefly the desert tortoise. 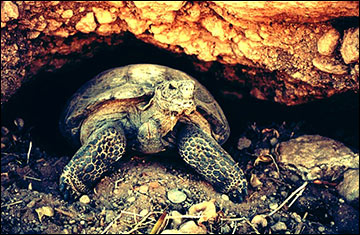 Later we learned the BLM had actually been euthanizing scores of endangered tortoises, as well as releasing some into the wild, in advance of closing the doors to the Desert Tortoise Conservation Center, which they claim lacked funding.

Since the start of the conflict, Bundy has asserted that the cattle he grazes actually benefit the desert tortoise population. “I’ll never get it. If it weren’t for our cattle, there’d be more brush fires out here. The tortoises eat the cow manure, too. It’s filled with protein,” Bundy stated.

It turns out, he’s right, according to one range expert.

Writing for the journal Rangelands in 1990, range ecology expert Vernon Bostick made an outstanding case for the desert tortoise’s dependent relationship on grazing livestock. Beginning with the Taylor Grazing Act of 1934, which reduced grazing land use by about 50 percent, the federal government’s increased regulation of grazing lands, Bostick argues, actually makes them directly culpable for the decline of the desert tortoise population.

The correlation, Bostick outlines in a short treatise entitled, “The Desert Tortoise in Relation to Cattle Grazing,” is evidenced by the historical record, and can essentially be summed up in six words, “the more cows, the more tortoises.”

This is because “Desert tortoises feed primarily on dung. The more animals using the range,” Bostick says, “the more dung, which makes more food available for tortoises.”

Because desert tortoises lack teeth, they’ve evolved to be able to subsist on dung. “The tortoise can harvest only tender vegetation, and it can’t masticate even that,” explains Bostick. “The tortoise can’t process enough bulky, low analysis forage fast enough to meet its nutritional requirements. They solved this problem long ago – they allow other animals to do it for them.” 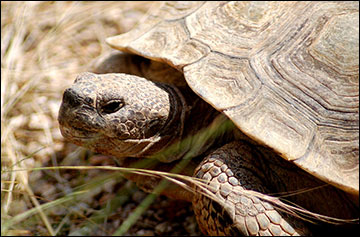 Additionally, “Fresh cow dung is 85 to 90 percent water,” a valuable commodity in the desert that can mean the difference between life or death.

Moreover, Bostick highlights that the nutrients in cow dung help tortoises stave off various deficiencies. In one finding, when cow dung was absent, the tortoises developed osteoporosis, a condition characterized by a decrease in bone density and brought on by a lack of protein.

Bostick details four main data points from the historical record illustrating that desert tortoise populations thrive when foraging alongside cattle, and suffer when they don’t:

“1. Desert tortoises have coexisted with cattle for 300 years in California and Mexico and at least 100 years elsewhere. 2. The highest tortoise densities known occurred at a time when overgrazing by livestock was the severest ever known. 3. The fewer the cattle on a range, the fewer the number of tortoises. 4. Excluding cattle for many years endangers the tortoise population.”

“The most complete data is from the Beaver Dam Mountains,” Bostick told the Las Vegas Review-Journal in June 2008. “Woodbury and Hardy reported a tortoise population density of 150 per square mile in 1948. BLM reduced cattle grazing a few years later and eliminated cattle in 1970. Coombs reported a tortoise density of 39 per square mile in 1974. In these 26 years cattle use was reduced 100 percent and tortoise numbers were reduced 74 percent.”

In typical big government fashion, the Bureau is fraudulently extorting ranchers for grazing fees to supposedly protect the very endangered animals they’ve been responsible for killing off.

“What most people don’t realize is that, although unwritten, the primary objective of both the Forest Service and the BLM has been, and continues to be, the elimination of all private interest on federally managed lands,” wrote rancher and researcher Cliff Gardner long before the Bundy standoff occurred. “And nowhere, have they been more successful than right in Clark County.”

“In the end,” Gardner says, “the tortoises suffer, honest and hard working citizens are forced to pay exorbitant and illegal mitigation fees. Ranchers and other enterprise are put out of business without benefit of due process or just compensation. Recreationist and sportsmen are forced off of their traditional recreation areas. And for what? So governments can grow in strength and power.”

Considering the extent to which the BLM is responsible for the decline of the tortoise population, it’s no wonder notorious animal rights group PETA hasn’t been more vocal through all this.