An American patriot and hero…. 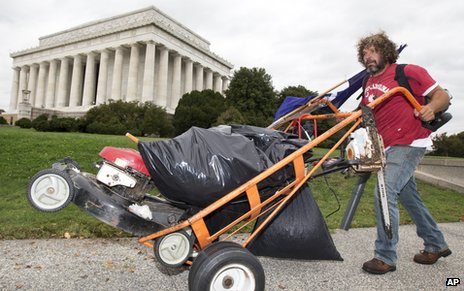 Thousands of workers sent home, cancer patients denied new drugs and weddings postponed. But the way some individuals have responded to chunks of the US government closing down has lifted the spirits, says Tom Geoghegan.

The sight of Chris Cox pushing a lawnmower across Washington’s National Mall, a chainsaw hanging from it, was one that warmed the heart of many who heard about it.

Cox, who made the trip from South Carolina and was carrying the state flag, says his “memorial militia” crusade was non-political, merely an attempt to keep the area between the Lincoln and World War II memorials tidy before thousands of veterans are due to attend an event on Sunday.

His wasn’t the only act of altruism to emerge from the wreckage of the partial shutdown. On the same day, the military charity Fisher House announced that it would pay more than $500,000 (£313,000) to cover the death benefits denied to five bereaved families. And a philanthropist billionaire has thrown a lifeline to a pre-school education programme called Head Start, to the tune of $10m.

When Adam Brown and Joy Miller learned that their wedding venue in Yosemite National Parkwas off-limits, a caterer in San Francisco stepped in to supply food while other businesses provided a venue and all the trimmings. “We feel so blessed and honoured that strangers have given so much to make our wedding a reality,” Miller told CNN.

People all around the world act more altruistically for the common good in times of emergency, says moral philosopher Peter Singer, in circumstances that range from something like this to war and famine. But philanthropy has a strong tradition in the US and there’s something distinctly American about the idea that individuals can take over the functions of government.

“Like the guy mowing the lawn in Washington, the idea that somehow people can step in and you don’t really need government, you can do it by charity,” he says.