Americans fleeing the US in record numbers, renouncing their US citizenship….

“I wouldn’t join any club that would have me as a member.” — Groucho Marx

I know how he feels, and so do an increasing number of Americans.

Of course, Groucho’s crack was meant to poke fun at his own disreputable persona. But a skyrocketing number of Americans are deciding that they want to leave “Club U.S.A.” for good. The country itself is becoming a disgrace, and they no longer want to be associated with it.

Indeed, almost 3,000 Americans officially renounced their U.S. citizenship in 2013, according to Treasury Department records. As you can see in the chart, that’s a 221 percent increase over the previous year.

They join illustrious ex-Americans such as singer Tina Turner, Facebook founder Eduardo Saverin, filmmaker Terry Gilliam and songwriter-socialite Denise Rich, all of whom have renounced their U.S. citizenship in the past few years.

For years, formal expatriation was a rarity. As recently as the early ’90s, only a few hundred citizens took this step each year. Now the numbers are almost 10 times higher.

What do these ex-Americans know that would lead them to take such a drastic step?

It’s something that I’ve been talking about for a long time. And it’s about to get much, much worse.

Indeed, looming changes in U.S. tax law scheduled to take effect in July this year are almost certainly behind the surge in expatriation. That’s what ordinary American citizens living abroad are telling reporters who ask them. 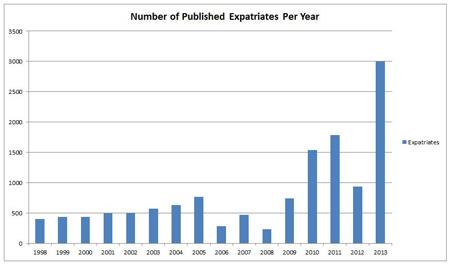 The U.S. tax code is unique in that it seeks to tax all income earned by U.S. citizens and green card holders, no matter where in the world they live or where they earn it. Almost all other countries tax only domestic earnings.

Although some foreign income is exempted from U.S. tax, millions of Americans living abroad are forced to pay the Internal Revenue Service every year, even though they don’t live in the U.S., earn their living entirely abroad and don’t consume any significant U.S. government  services. And every U.S. citizen abroad — even if he owes no tax — has to file an IRS Form 1040 return every year.

But the real burden of all this bureaucratic nonsense falls on Americans with significant financial assets in foreign bank and investment accounts, and it’s about to get worse.

U.S. citizens have long had to file complex reports with the U.S. Treasury listing all their foreign accounts and balances, which inevitably require expensive expert advice and preparation. The penalties for failing to file these forms are exceptionally severe.

And starting in July this year, because of the Foreign Account Tax Compliance Act (FATCA), offshore financial institutions — banks, investment houses, insurers and the like — are required, under penalty of exclusion from the U.S. banking system, to report most U.S. citizen accounts held overseas. Foreign banks are about to become part of the IRS’s network of informants.

Now, many U.S. citizens living permanently abroad wouldn’t consider this a big deal. They file their U.S. Treasury reports and their taxes, and that’s it. But a significant proportion of Americans abroad are finding that the reporting requirements imposed by the IRS on their banks are prompting the banks to close their accounts unilaterally. It’s just not worth the trouble and cost to have American clients.

Imagine how you’d feel if the ill-considered, tyrannical actions of a government in a country you don’t even live in imposed that sort of burden on you as you tried to live your life peacefully abroad.

But it gets worse.

The Tangled Web Of The IRS

Thousands of people who have U.S. citizenship by birth — but who live in and are citizens of the country of their parent’s origin — are finding out that they are also liable to report under these insane U.S. laws. Canadians, in particular, are feeling the bite of this new law. Any Canadians who live near the U.S. border and may have been born in a nearby American hospital are now trapped in a bureaucratic nightmare almost impossible to describe. Their local Canadian banks have to report on them, even though they have nothing to do with the U.S.

So these and other U.S. citizens are doing the logical thing. They are turning their backs on the so-called “land of the free” and washing their hands of the whole crazy business, as well they should.

And maybe you should consider doing so as well. The U.S. government has accumulated a mountain of debt, and the only answer it has to eliminating that debt is to grab your wealth — regardless of where you live and earn. The price of being a part of this club is rising, but the benefits are dwindling fast. That’s why we at the Sovereign Society works diligently to identify and promote opportunities for a safe, prosperous and hassle-free life abroad.