A dose of hard, cold truth about Nelson Mandela….

Obama And Mandela: A Lot More Than Little White Lies 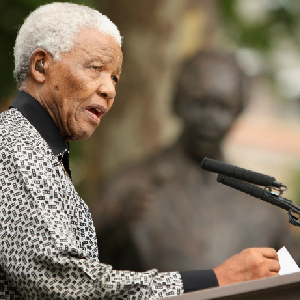 “If there is a country that has committed unspeakable atrocities in the world, it is the United States of America.” — Nelson Mandela, Jan. 29, 2003

Nelson Mandela, the former terrorist-turned-compromiser and the so-called “father of democracy” who served as president of South Africa, hated America. But progressive liberals loved him — none more so than President Barack Obama, who ordered that flags at the White House and all Federal buildings fly at half-staff through Monday, following Mandela’s death last Thursday at age 95. But that was only the start.

Obama, like so many black celebrities and members of the white media, has personalized his relationship with Mandela beyond all reason: “He no longer belongs to us; he belongs to the ages,” Obama saidupon learning of Mandela’s death. The President added, “We will not likely see the likes of Nelson Mandela again.”

I have no doubt about that last statement. Can you think of another terrorist bent on killing and overthrowing a government with bombs and armed insurrection who went on to be considered the greatest statesman ever? And just in case you think that Mandela was never a terrorist but a misunderstood man walking in the steps of Mahatma Gandhi, then you are at odds with Washington. He was on the terrorist list until 2008.

No doubt, South Africans were upset when Mandela tried to blow up a hospital in the early 1960s. The difference between Mandela then and Timothy McVeigh, who blew up the Federal Building in Oklahoma City on April 19, 1995, is that McVeigh was a deadlier terrorist. Later in life, Mandela did say that he was glad he was caught and did not kill all those innocent sick people. Millions of people find it heartwarming that Mandela had a change of heart.

Check one for sainthood!

In the 1980s, when the Government of South Africa said that Mandela could walk out of jail a free man if he would simply renounce violence as a means to black majority rule, the great leader said no. Apparently, his wife Winnie Mandela was too happy necklacing her black opponents with tires filled with gasoline for her husband to make a false promise.

Then there is the fact that Mandela is now celebrated as the greatest human being of the modern era, perhaps any era. Larry King said on CNN that he knows of no greater person who lived in the 20th century than Mandela. Apparently, King has forgotten a lot of people.

But my favorite shout-out comes from Peter Oborne, who wrote last Friday for The Telegraph:

There are very few human beings who can be compared to Jesus Christ. Nelson Mandela is one. This is because he was a spiritual leader as much as a statesman. His colossal moral strength enabled him to embark on new and unimaginable forms of action. He could lead through the strength of example alone.

That makes two human beings who I have heard compared to Christ: Mandela and Obama. (After all, Oprah Winfrey called Obama the “chosen one.”)

What do both men have in common? Their roots are African. And, beneath all that gloss, polish and hype, Mandela was what Obama remains: a die-hard Marxist.

Dying To Be Seen By Obama

After Obama was snubbed last summer by a then-ill Mandela, the President and the first lady were a spectacle at services for Mandela, fueling the flames of the debate over who loved Mandela more: Bill and Hillary Clinton or Barack and Michelle Obama? It was practically a repeat of three weeks ago, when the Clintons and the Obamas were almost wrestling over the eternal flame torch at the burial site of John F. Kennedy upon the 50-year anniversary of his assassination.

World leaders flew in from all corners of the world to prove they also loved Saint Nelson, despite his past proclivity for violent revolution and his enduring friendships with the late Moammar Gadhafi and Fidel Castro.

It is reality TV, the “I Loved Nelson Mandela The Most Show.” And the Big Three networks, plus CNN and MSNBC, all want to win. Thus they present a Mandela love fest (which began last Thursday and may last until his burial on Dec. 15), detailing how he single-handedly sowed the seeds that brought peace, democracy and prosperity to South Africa.

But what is the truth about Mandela?

I believe he was a changed man, a nonviolent man, by the time he was released from prison in 1990. I also believe that without him, South Africa would have disintegrated the way Rhodesia did — with mass killings and an immediate government takeover of white property. Instead, the property takeover in South Africa has happened over a decade and will probably accelerate now that Mandela is gone.

That said, no man was a greater savior to his country against oppression than Lech Wałęsa, the co-founder of Solidarity in Poland and a political prisoner under martial law imposed at the behest of the Kremlin. Wałęsa probably did more to tear down the Iron Curtain than any person, and he helped give Poland and the rest of Eastern Europe its first independence since Vladimir Lenin enslaved hundreds of millions of people.

What will happen when Wałęsa, the former President of Poland, dies? At best, he might get a mention at the bottom of Page 1 in The New York Times.  There will be no flags at half-staff; neither will there be hour upon hour of specials on his life. No past or present American Presidents will speak of Wałęsa’s greatness and attend his memorial service.

But what are the core differences between Wałęsa and Mandela? One fought for democracy through peaceful means. The other used violence in an attempt to overthrow a white government and was a lifelong Marxist. One was a playwright. The other, even in old age, raised a clenched fist as a symbol of black power.

But the biggest difference is that Wałęsa is white and Mandela was black.

The Unreported Suffering Of Whites In South Africa

Have you noticed what is missing in the lionization of Mandela? There has hardly been a report out of South Africa. Perhaps that is because millions of lives were turned upside down once Mandela became President. We’ve seen no reports from the disenfranchised whites who have lost their jobs, been swallowed up by poverty or had to leave South Africa. And we’ve seen no reports on the growing poverty and crime in South Africa that has sprung up since Mandela’s African National Congress (ANC) has economically ruined the sole bright economic spot that existed in all of dark Africa. That Apartheid was evil is beyond dispute, but that the new South Africa that Mandela helped create is a multiracial democratic paradise is an outright lie. The huge transition in that country has caused terrible suffering.

My best friend of 30 years teaches overseas and speaks of South Africa often. For the past decade, at his different posts, the largest groups of expatriates he’s worked with originate from South Africa. They are whites who teach and administer in schools in Europe, the Mideast and Asia. They have been forced to leave their homes and families in South Africa because, under ANC rule, jobs have been taken from whites and handed to blacks. Freedom for all races, which Mandela bragged about for 20 years, is nothing more than affirmative action on a national scale.

It was an improbable sight even 10 years ago in South Africa: white people in shacks — poor, desperate, and surviving off handouts.

But with the fall of apartheid and the transformation of the job market in favor of the majority black population, increasing numbers of white people are without work and living below the poverty line.

Recent statistics from the Bureau for Market Research show that there are 650,000 whites ages 16 or over without work, with estimates saying that total is growing by 15 percent a year.

That is not even the worst of it. Author Ilana Mercer wrote: “Since he came to power in 1994, approximately 300,000 people have been murdered.”

Given a population of only 50 million people, that many dead in less than two decades is not so different from the purges under Josef Stalin or Mao Zedong. So even if we accepted Mandela at his word as a changed man who was once a terrorist, the erasure of white society and the soaring violence against non-ANC blacks hardly make Mandela a man for the ages or a Christ-like figure.

Yet you won’t hear that from Obama or the liberal media. It is an inconvenient truth. Instead, black leaders, black celebrities and the media will keep doing what they have been doing: exacerbating white guilt over the treatment of African-Americans and pushing race relations to a new low in the United States. Divide and conquer. That was Mandela’s way. That is Obama’s way.