Every opportunity Mark Zuckerberg and his flying monkeys at Facebook have to hurt someone, they take it!

For ego, for money, to further a political agenda, for the hell of it, it doesn’t matter. Controlling people and inflicting maximum pain is what matters.

Now, one congressman has had enough of Zuckerberg’s circus and is publicly labeling him a liar and calling for an investigation into the egregious violation of personal trust by Fascistbook which sold the data of millions of its users, even those who refused to give the social media nightmare permission to use their personal data. The congressman, David Cicilline, a Democrat, surprisingly, also demanded that those responsible be held accountable.

A Democratic congressman hammered Facebook and its CEO, Mark Zuckerberg, following a report that the company is sharing large amounts of its users’ data with other companies.

“Sure looks like Zuckerberg lied to Congress about whether users have ‘complete control’ over who sees our data on Facebook,” Rep. David Cicilline (D-R.I.) tweeted on Sunday.

“This needs to be investigated and the people responsible need to be held accountable,” the top Democrat on the House Judiciary antitrust subcommittee continued. 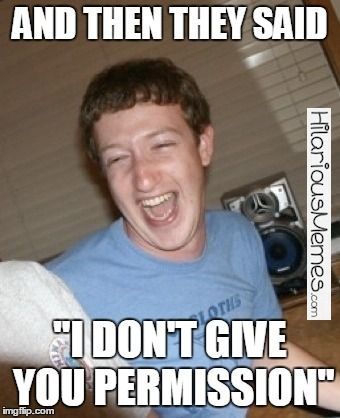 The partnerships allowed device makers to obtain Facebook user data like relationship status, religion and political leanings from users and also allowed for the sharing of the data of users’ Facebook friends.

Facebook had started to end these partnerships in April, according to the story.

The report raises questions over whether Facebook violated a 2011agreement with the Federal Trade Commission (FTC) that it would not override users privacy settings without first getting their expressed consent.

The FTC is already investigating Facebook over whether it violated this consent decree following revelations of how it handled user data in the wake of the Cambridge Analytica scandal.

Facebook has been under significant scrutiny after it was revealed Cambridge Analytica accessed millions of users’ private information without their consent.

Lawmakers forced Zuckerberg to testify on the matter in April and grilled him over how the British research firm was able to obtain data on as many as 87 million Facebook users.

Sure looks like Zuckerberg lied to Congress about whether users have “complete control” over who sees our data on Facebook. This needs to be investigated and the people responsible need to be held accountable. https://t.co/rshBsxy32G

Our pals at Overpasses For America responded….

“Company Town.” Nailed it! That’s exactly what Facebook is. Remember the company towns that grew up around mining camps in the 1800s and early 1900s? Those who worked for the mining companies lived in the company town, so named because the company owned everything in town, the houses, the store, the school, the church. Everything! Employees were paid just enough to pay their (inflated) rent to the company, buy their (inflated) groceries from the company and nothing more. The company owner (Herr Zuckerberg, in this case) had a captive market with several lucrative revenue streams.

Such a deal, right?

Fascistbook is a company town whose billions of users are nothing more than cattle to be sold to the highest bidder. On one end, Herr Zuckerberg sells your data for billions of dollars. On the other end, he advertises on YOUR page. Guess who enjoys the advertising revenue. It ain’t you!

And all the while, you and I and two billion others dutifully labor at our keyboards, creating the engagement, cross-engagement, and global commerce that is making Zuck millions and millions of dollars per day while increasing Fascistbook’s stock value to the point that very soon Herr Zuckerberg will be in the Jeff Bezos 100 Billion Dollar Club.

And how does Zuck show you his gratitude? He sells your personal data to anyone who will pay for it.

As a developer, it is even worse for me. I not only make much money for Herr Zuckerberg from our many Facebook pages and groups, I also make money for  Fascistbook by working my butt off producing content that my followers enjoy (I hope they enjoy it). Most of my traffic (70%) is picked up via mobile device. Instant Article is a Facebook streamlined program designed for publishers. Powdered Wig is a Facebook Instant Article partner. Our mobile readers receive our articles on their phones. The articles have many Facebook ads. Powdered Wig receives a share of that advertising revenue. I am not sure of the revenue split (they don’t tell us that – shhhh, it’s a secret, like all things Fascistbook), but I venture to guess that I am waaaaaaay on the short end of the revenue stick.

We have also paid Fascistbook (forgive my intermittent use of the terms “Facebook” and “Fascistbook” – the former is the legal term, the latter the more descriptively accurate, so I mix them up) thousands of dollars to promote our pages and posts. While paying them our hard-earned money, the control freaks at Fascistbook have restricted our use of our own pages, blocked us, and even completely deleted Powdered Wig’s page once, finally admitting that they had made a mistake and restoring it.

As if all of that has not been a great enough challenge, we must now deal with the progressive agenda of Herr Zuckerberg and his Silicon Valley legion of liberal weenies. It seems we publishers of the conservative bent committed an egregious affront to our benevolent benefactor, “the company.” We were instrumental in the election of Donald Trump as President of the United States. A few of us, from the now famous escalator ride, were on the Trump Train all the way to the election and remain steadfastly there today, which is like fingernails on a chalkboard to Silicon Valley liberal weenies, who can and do punish us at will. Sure, it is a violation of our First Amendment rights, but since when did the Constitution mean anything to a liberal weenie? In fact, since when has a liberal weenie ever understood our Constitution? For that matter, when has a liberal weenie even heard of the Constitution?

Facebook is a marvelous marketing tool. In the right hands, it could do so much good for so many. Sadly, it is not in the right hands. Unregulated, it will simply become worse and more destructive. It has no leadership. None! Zuckerberg is NOT a leader! He admitted as much before Congress, responding to a question regarding the censorship of conservative publishers, replying that America must understand that Silicon Valley is filled with liberals.

Translation: “I have ZERO control over the people who work for me.”

Well, young man, you had better find some control. You are at the head of one very powerful organization and if you can’t control it, it will either die of its own gluttony or you will lose control by other means.

Powdered Wig’s one-time reach of 15 million per week was down to 90,000 as of this morning. We didn’t do that. We are being choked off by the liberal tools at Fascistbook. How long we can hang on I’m not sure, but as long as our reach is at least 1, I will continue to tell the truth, the miserable Nazis at Fascistbook be damned!

Help us keep the lights on and the message alive by donating anything you can and, please, share this link everywhere…. https://www.gofundme.com/powdered-wig-society

WATCH: Biden Refers to Horn-Honking Pro-Trump ‘Folks’ As ‘Ugly’ At Minnesota Rally
October 31st, 2020 Flag And Cross
Send this to a friend