Sworn deposition by a Qatari insider confirms that Ilhan Omar is a Qatari asset who gave US military secrets to Iran. He also describes her as “a sex maniac”

In a sworn deposition, Alan Bender, a Kuwaiti-born Canadian businessman who travels in high circles in the Middle East, shared shocking evidence implicating US Congresswoman Ilhan Omar and congressional hopeful Linda Sarsour, both on the payroll of Qatar, Bender claims, as are many other Democrat politicians and high-profile members of the mainstream media, who Qatar manipulates to print or air only what Qatar approves and to not print what Qatar disapproves. In short, the Editor-in-Chief of the mainstream media is the Qatari government, according to Bender’s testimony.

Ilhan Omar is on the Qatari payroll and was groomed and “appointed” to the US Congress by Qatar, which backs her financially, Bender asserts. She has relayed sensitive US government and military information to Iran and Hezbollah through Qatar. This is clearly treason!

Omar is also called “Sister” by Qatari and other Middle Eastern Muslim leaders, a title given only to women who are members of the Muslim Brotherhood. She has also sworn her allegiance to Muslim leaders in the Middle East, including President Erdogan of Turkey, according to Bender.

Keep in mind, Omar is a member of the House Foreign Affairs Committee, and according to this apparently very knowledgable witness, is funneling sensitive, very likely highly-classified, information to Iran, the world’s greatest state sponsor of terrorism, and terrorist organization Hezbollah, through Qatar.

Ilhan Omar married her brother (the image below is a copy of the marriage certificate). 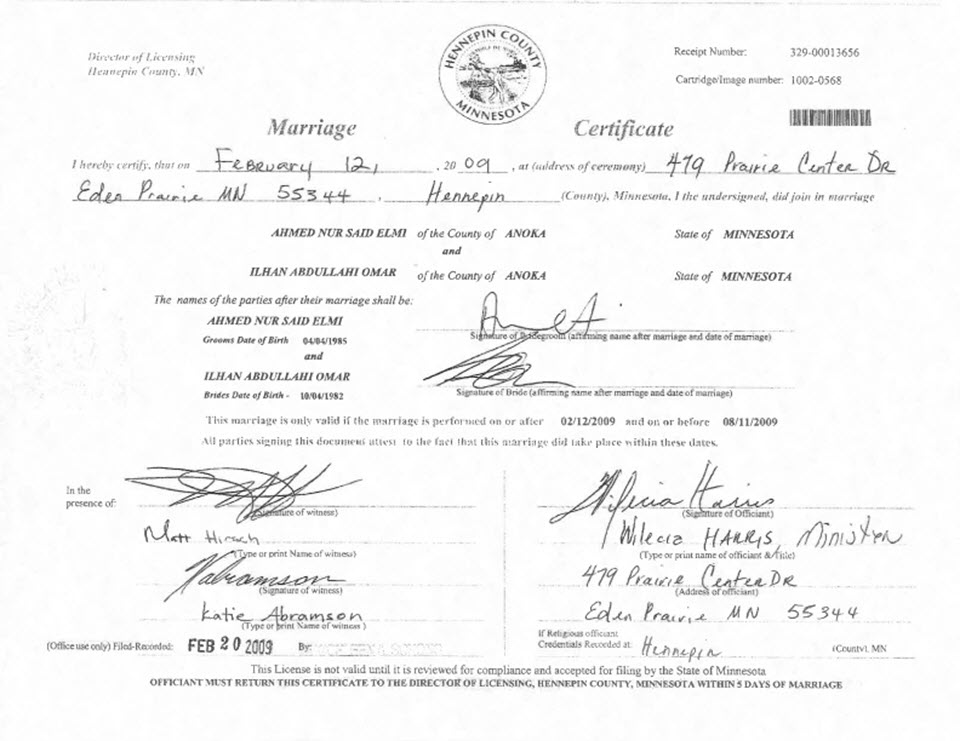 How could Omar possibly obtain a security clearance to serve on the House Foreign Affairs Committee? Surely, a simple background check would have shown that she was married to two men at the same time, one of them being her brother, who she married apparently to gain him US citizenship, which succeeded. Thus, it appears she is not only guilty of bigamy, punishable by five years in prison, but also immigration fraud.

According to Bender, when he asked a high-ranking Qatari official how such a devout Muslim as Omar could be bribed, the official indicated (Page 77) that Omar is not a devout Muslim, but, rather, a sex maniac who can be easily plied with sex and money: “Don’t be fooled by her headscarf,” declared the official. “She’s a sex maniac, and she is very weak when it comes to money and sex. And we got both.”

So, a woman whose background check would not have gotten her a job cleaning toilets in a federal building is a sitting member of the United States House of Representatives Foreign Affairs Committee.

How could this happen? This could only happen if America-hating Nancy Pelosi, Speaker of the House, who makes the committee appointments, makes it happen. Would anyone be surprised if it was discovered that a little Qatari cash has found its way to Pelosi’s purse?

Linda Sarsour is Qatar’s next so-called “crown jewel.” Like Omar, Sarsour has been groomed by Qatar, is on the Qatari payroll, and is being backed for “appointment” to the US Congress, and is also a “sister” in the Muslim Brotherhood, states Bender’s testimony.

Many US politicians and mainstream media news reporters and on-air personalities are on the Qatari payroll, claims Bender, who has the names but did not reveal them in his deposition.

Still think the swamp is a myth?

Transcript of Bender’s deposition. References to Omar begin on Page 50…