Twitter suspends Benghazi hero’s account after he criticized Barack Hussein for not sending help, yet Farrakhan and Hamas still have active accounts

Photo, above: Ambassador Chris Stevens’ body being dragged through the streets of Benghazi while Barack Hussein slept through what he is now calling a “wild conspiracy theory”

Jackoff Dorsey, who is in a neck-and-neck race with Mark Zuckerberg to see who will claim the title of most authoritarian fascist of the social media universe, claims that his platform, Twitter, is not biased against conservatives, a shameful lie that every conservative is well aware of, especially those of us who are publishers.

Benghazi hero Kris Paronto recently tweeted a reply to Barack Hussein who, amazingly, claimed that Benghazi was nothing more than a “wild conspiracy theory,” which prompted the lamebrains at Twitter to not restrict Barack Hussein’s account, but rather to restrict Kris Paronto’s account.

Paronto nearly died on the roof of the Benghazi consulate on 9/11/2012, fighting well-organized terrorists armed with automatic weapons, RPGs and mortars that they were lobbing onto the roof that Paronto and his fellow warriors were defending the compound from. Two of Paronto’s fellow warriors, Tyrone Woods and Glen Doherty, died on that roof. Ambassador Chris Stephens and Information Management Officer Sean Smith perished in the building.

Yet, Dorsey insists that Twitter does not censor conservatives. My own Twitter account has been shadowbanned for as long as I can remember. I had another Twitter account before my current one and it too was shadowbanned. My tweets and replies to tweets get almost no engagement, as they are virtually invisible. I figure 1 tweeter in 100, maybe 1 in 1,000 can actually see my tweets.

Obama calls the Benghazi attack, which resulted in the deaths of 4 Americans, a "wild conspiracy theory." pic.twitter.com/zQSMHPd8G1 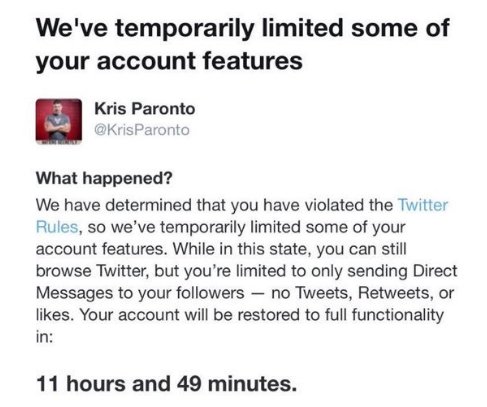 Incomprehensible that even a world class liar like Obama would be low enough to disparage the heroes of #Benghazi… https://t.co/MRmoh0tQGL

"Negligent homicide" is typically how I refer to the Benghazi horror. Barack Hussein and Hitlery sacrificed American lives for political gain and should be prosecuted for it. They should then be prosecuted for the coverup.

VIDEO: Antifa Rioter Caught On Camera Hitting Cop In Back of the Head With Baseball Bat
September 25th, 2020 Flag And Cross

New Incriminating Crossfire Hurricane Details Show Up, ‘Trump Was Right’ — And It Gets Worse
September 24th, 2020 Clash Daily
Send this to a friend