Mother of one murdered Obama gay lover speaks out. “There is more to the story. I do believe they are shielding somebody or protecting someone.”

I believe it is fairly well-known that Barack Hussein’s personal history is “fabulous,” if you know what I (cough, gay, cough) mean.

OK. There are lots of fabulous people. But what isn’t such common knowledge is the fact that three gay men who were romantically connected to Barack Hussein during his years in Chicago, all died within a little over a month’s time in November and December, 2007, which coincidentally is the same time Hussein was ascending the Democrat ranks to become the party’s 2008 presidential nominee, and no doubt allegations of his “fabulous” past would likely have had a very negative impact on his chances of being elected.

Just coincidence, right? Well, the elderly mother of one of the three gay lovers, Norma Jean Young, mother of Donald Young, doesn’t think so. She suspects that her son’s murder was the result of Barack Hussein’s run for the White House and her son’s romantic involvement with the future president.

Donald Young was the “openly gay” choir director at Trinity United Church of Christ. You remember that place, right? The church of Reverend Jeremiah Wright, famous for his mantra, “No, no, no, not God Bless America. GODDAMN America!” Yeah, that guy, Hussein’s spiritual mentor.

According to DC Clothesline, “There were two other openly gay men in Wright’s church: Larry Bland and Nate Spencer. In late 2007, as Obama began his ascent to be the Democratic Party’s presidential nominee, in a span of 1½ months, all three men “conveniently” died:

Barack Hussein is a lifetime member of the Chicago bathhouse/gay club, Man’s Country, as is Rahm Emanuel and many other Chicago dignitaries and politicians who wound up in the White House.

Just coincidence, right? Nothing to see here, folks. Move along. 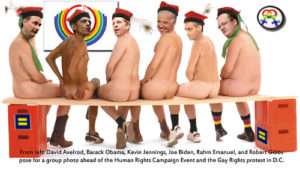 If Nazi & Bomb Making Books Can Openly Sell On Ebay, Why Did They Cancel Dr. Seuss?
March 5th, 2021 Sons of Liberty Media
Contact us