Our incredibly articulate and eloquent Teleprompter Reader-in-Chief, Barack Hussein, attempted an ad lib attack on Donald Trump. You might say it didn’t go quite as well as was hoped.

Without his teleprompter Hussein was helpless, stammering and stuttering, searching for words that would not come, settling for words like “okey-doke.”

The world according to Barack Hussein: 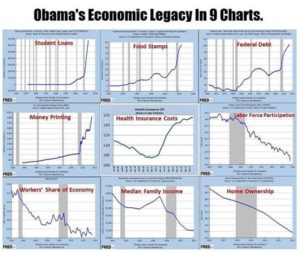 What a complete dumbass we have in the White House. Give me Slick Willie any day, getting knob jobs from interns in the Oval Office, over this national embarrassment.

Dianne Feinstein Caught Without Mask At Airport After Calling for Mask Mandate At Airports
September 28th, 2020 Flag And Cross
Send this to a friend