Nathaniel Grigsby was a Union officer during the Civil War, a patriot, and a close friend of President Abraham Lincoln. He was also very much on to the treasonous and evil antics of the Democratic Party, which, after the Civil War, established an enforcement arm to keep former slaves from voting and prospering. You might better know that enforcement arm as the Ku Klux Klan.

In Kansas, one man carried out his dying wish and gave us a “grave” warning about the Democratic Party. 129 years ago, his last request was fulfilled and etched on his tombstone.

Nathaniel was a dear friend of Abraham Lincoln.

After Lincoln moved to Illinois in 1830, Nathaniel moved with his father to Carroll Co., MO in 1855.

In 1860, he was living in Norborne. He wrote to Lincoln and received an appointment as Republican Precinct Committee Man. He placed Lincoln’s name on the 1860 ballot. All of Natty’s neighbors were Southern sympathizers. He had been talking about electing Lincoln for president in town. One morning at about 2 or 3 a.m. a neighbor rode up and told Natty not to light any lights. The neighbor wanted to warn him that his neighbors were planning to murder him and if he wanted to live he should be on his way.

After the warning, Natty moved back to Spencer Co., IN where he and four of his five sons enlisted in Company C 10th IN Cavalry (Richmond Davis did not enlist). Natty was named 2nd Lieutenant. ~Authentic Campaigner

In 1890, Mr. Grigsby passed away in Kansas. However, he left a brilliant warning to future generations inscribed on his tombstone. 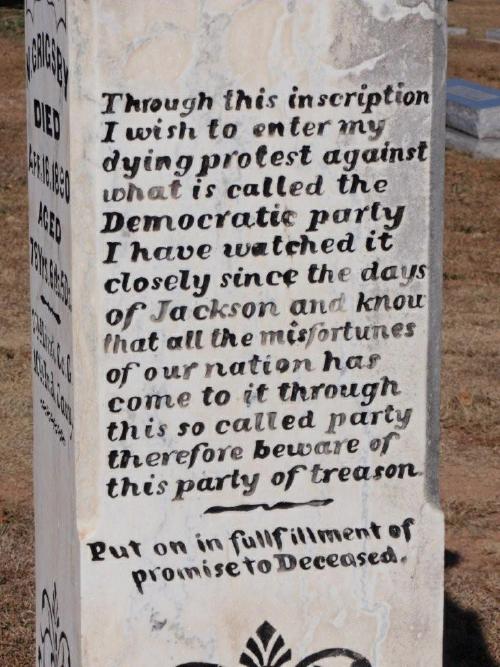 “Through this inscription I wish to enter my dying protest against what is called the Democratic party. I have watched it closely since the days of Jackson and know that all the misfortunes of our nation has come to it through this so called party therefore beware of this party of treason.”

Set in that stone is a warning to all about the Democrat party. Even Snopes states that the inscription is in fact true.

While you can blame it on his involvement in one of the bloodiest battles in history, loosing a son in the war, or the fact that his childhood friend was assassinated, it still rings true. You can even choose to believe the old Dixicrat lie that even Sodahead admits is a myth back in 2002. You can even blame his 30 years of bitterness or the KKK (founded by Democrats).

It seems these days that everywhere I turn race, old politics, reparations, and reverse racism (even going as far as challenging a NFL team name) is everywhere. Calls to destroy the Constitution, wanting Amendments to destroy the Bill of Rights, calls to turn our beloved country into the USSR type structure, and racist organizations have all one thing in common. Since the DNC likes to “drag up” the nations past while inciting the public into another Civil War, well, two can play that game.

It seems Nathaniel Grigsby’s dying wish to warn us was right all along. 129 years ago…