Walking across the White House lawn after exiting his helicopter, President Trump did not stop to speak to reporters, who were shouting disrespectfully at the president.

Never has a president been treated so disrespectfully by the mainstream media, and I don’t understand why President Trump allows it.

Were I President Trump, I would make it very clear, in writing, that the outbursts and demands for attention must stop immediately. I am certain that there are rules already in place regarding decorum and accepted behavior by reporters on the White House grounds. If not, I would publish a list of rules for White House reporting which would include:

The media in this country has dropped all pretense of impartiality when it comes to covering President Donald Trump.

The latest example of this can be seen in the reaction by members of the White House press corps in the immediate aftermath of Thursday’s shooting at the Capital Gazette newspaper in Annapolis, Md. — if this doesn’t embarrass America over the state of journalism today, nothing will.

he end result being that the media then reported that Trump “dodged” all questions about the shooting — this being Act II, as the left had already taken to social media to blame the president for the shooting because of his efforts to expose “fake news.”

(Turns out, the shooting wasn’t politically motivated. The gunman had a longstanding vendetta against the paper.)

The truly embarrassing part of the spectacle at the White House is not just the nature of the questions being screamed out, but the accusatory tone of the reporters:

“Any word about the dead in Annapolis?”

“Can you please talk to us about the dead reporters in Annapolis?”

“Do you have any words of condolence for the families, Mr. President?”

“Why are you walking away?”

“Why won’t you come and talk to us about that?”

Even though President Trump had made an official statement on the massacre via Twitter, that was not enough for the “unhinged mob,” as Michelle Malkin referred to the “amoral vultures” (Instapundit) who pass for the White House Press Corps these days.

Give the WH press corps two options:
1. Report fairly. No outbursts or interruptions. Since kindergarten, you have been taught to raise your hand and speak when called on. Resume that practice!
2. You will be removed from the WH indefinitely for any violation of Rule 1, above.

Listen to this unhinged mob.
They don't want his reaction, which he already made public. They want to grandstand in the wake of a horrific massacre and still-unfolding investigation.
Listen. https://t.co/NenmPmJvm8

You may recall Karen, a CNN analyst, was in the news recently when after trying to compete with CNN’s Jim Acosta for the title of “biggest showboating clown” with an emotional outburst at White House Press Secretary Sarah Sanders over illegal alien children being separated from their mothers.

CNN’s Brian Karem gets personal, screams at Sanders over immigration: ‘Don’t you have any empathy?!’ https://t.co/KbhjTj8QH8 pic.twitter.com/vxIyKYe8hx

Yes i know what makes Americans hate the media?

At every turn you try and disparage the man

It’s the lies, the constant anger, the nastiness

Give it a rest

This so-called “reporting” by the mainstream media, which amounts to lies, fake news, and regular tantrums, is going to lose the left millions of votes, many of which will become Republican votes.

You know I’m not a big trump fan
But I’m a fan of showing respect for the office
You just can’t heckle a sitting president like that .. I don’t care who it is .. 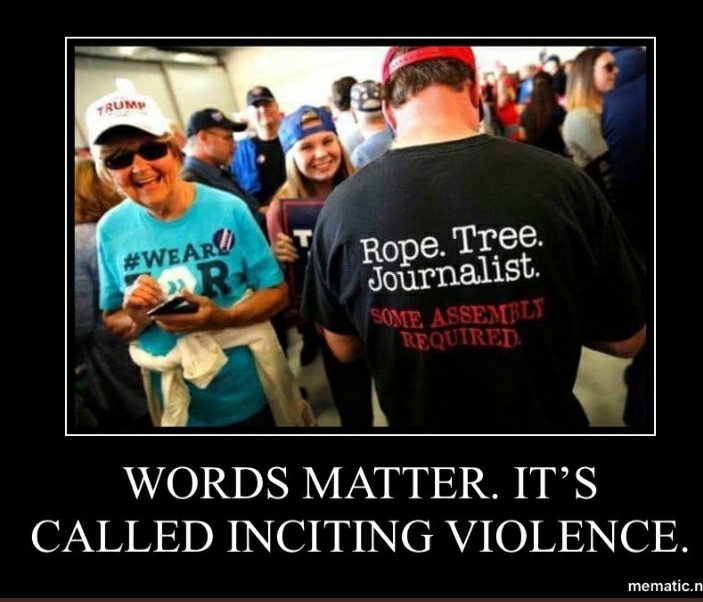 Prior to departing Wisconsin, I was briefed on the shooting at Capital Gazette in Annapolis, Maryland. My thoughts and prayers are with the victims and their families. Thank you to all of the First Responders who are currently on the scene.

Analyst Caught Engaging In How CNN Should Cover Up Trump’s Claims of Contested Election
December 2nd, 2020 Flag And Cross