Check out the discrepancies in Judge Roy Moore’s alleged signature in Beverly Wilson’s 1977 high school yearbook based upon a quick study of his actual signature (photo, above). Note that there are no less than 12 inconsistencies from Judge Moore’s actual signature to the poor forgery in Nelson’s yearbook.

Also note in the photo below that the version of Moore’s yearbook signature being reported by the media, CNN in this case, shows the signature in all black ink, whereas an undoctored, unfiltered photo of the signature shows it two distinct colors of ink, black, then blue. Why the deceit, liberal media whores?

This is a sloppier forgery than Barack Hussein’s birth certificate! 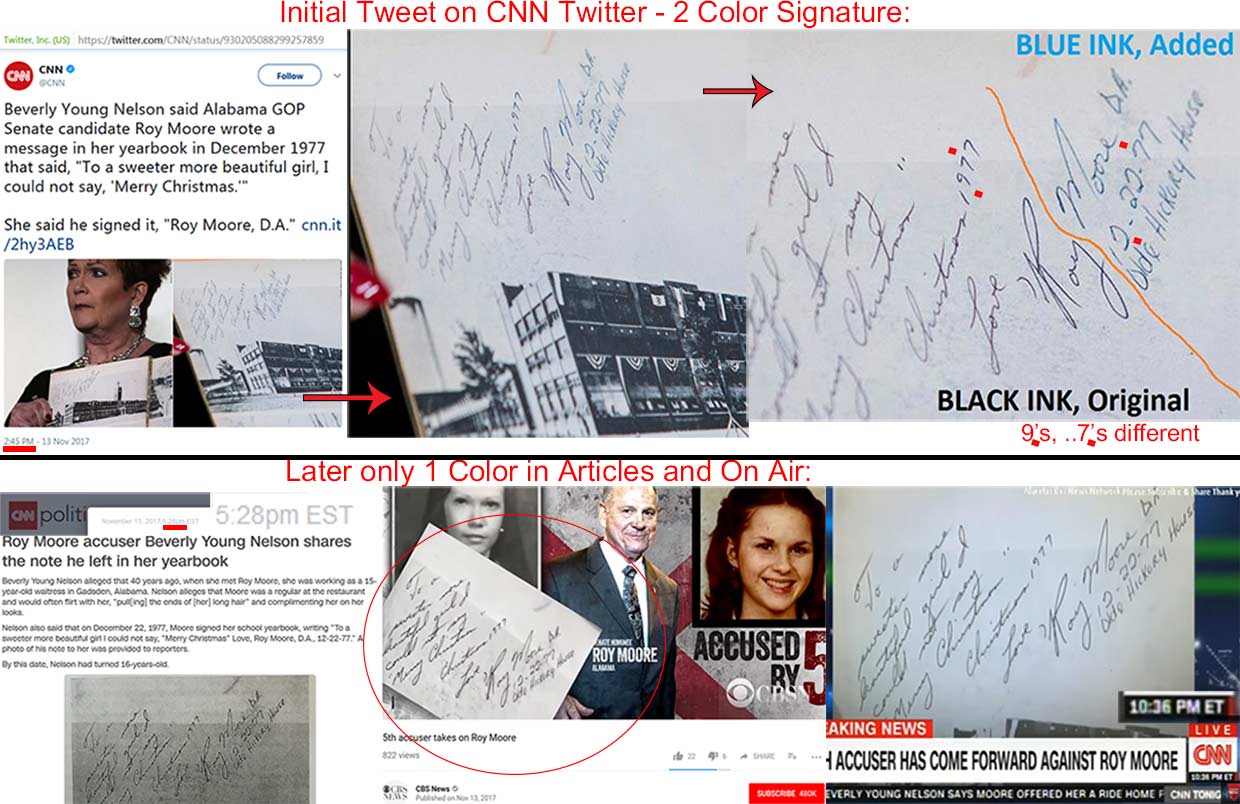 On Monday, Beverly Young Nelson presented a yearbook that was allegedly signed by Roy Moore in 1977. In the actual signature, there are 8 discrepancies, and over a dozen with the date and location included. It is now apparent that U.S. Senatorial candidate Roy Moore is the victim of a massive political attack to destroy his campaign.

We have obtained an official signature of Judge Roy Moore from a U.S. Term Limits Amendment Pledge that he signed on July 24, 2017.

First we will begin with the “Roy Moore” signature in the 1977 year book, and compare it to his actual signature:

1. The 1977 Yearbook has a loop in the first downward stroke of the letter “R.” The actual signature does not.

2. The middle of the uppercase “R” is mangled, and does not meet with the second upward stroke, as it does with the actual signature.

3. The lowercase “y” has a large loop. The actual signature does not.

4. The closing stroke of the signature with the letter “y” extends outward. The letter “y” in the actual signature extends upward, loops and then goes downward, after crossing the first loop of the uppercase “R” twice.

6. There is not a tail on the closing stroke of the uppercase “M.” In the actual signature, there is a tail.

Secondly, we will compare the “Olde Hickory House” to his printed name.

9. The “e” is clearly different and has a starting point below the line, then loops. The actual printed “e” directly begins with the loop.

10. The lowercase “r” is uppercase. In the actual printed writing, the “r” is clearly lowercase.

12. The “o” is opened on the right. In the actual printed writing, the “o” is indented on the left and closed.

As you can see, this is a clear forgery.

This observation of the signature and handwriting verifies Moore’s claim that did not sign the yearbook or know Nelson. He also expressed that he was unaware of the “Olde Hickory House” location.

“I can tell you without hesitation this is absolutely false,” Moore told reporters on Tuesday. “I never did what she said I did. I don’t even know the woman. I don’t know anything about her. I don’t even know where the restaurant is or was.”

This yearbook was used as evidence to frame Roy Moore as attempting to rape the girl that owned the book. Ironically, rather than substantiating the molestation accusation, the forgery has actually vindicated Judge Moore.