While most pundits, including yours truly, have credited the Democrats’ frantic effort to destroy Brett Kavanaugh to their mission to prevent a conservative majority on the bench of the Supreme Court, which jeopardizes all they hold dear, like their love for the wholesale slaughter of unborn children, Renee cites a video we featured in an article last month (9/11, coincidentally).

The video is of Lindsey Graham’s open interview of Supreme Court nominee Brett Kavanaugh, during which Graham appears to be surreptitiously planting a seed advocating for military tribunals to prosecute and even execute traitors, which many Americans believe litter the Democrat Party.

Indeed, it could come down to a Supreme Court decision as to whether said traitors would be prosecuted in the US judicial system as is their right as American citizens, or whether they would lose their constitutional rights as seditious co-conspirators and/or traitors and be prosecuted by military tribunal.

While no one can be certain exactly what the Democrats are worried about with the confirmation of Brett Kavanaugh, let it suffice to say that they have plenty to worry about!

Straight up, Lindsey Graham has pissed me off in the past on a regular basis. He was a McCain clique Rino bent on obstructing the conservative agenda.

McCain has vanished via the most natural attrition and the old Lindsey Graham has morphed into a tough, incredibly sharp patriot who, frankly, has had me cheering him on of late.

During the Brett Kavanaugh confirmation hearing, Graham questioned the soon-to-be Supreme Court justice on a variety of topics, but one topic stood out and, no doubt, had patriots from sea to shining sea screaming their approval.

Kavanaugh demonstrated his vast, in-depth knowledge of US law and Graham planted a seed and message to the deep state traitors who have been doing all they can to destroy President Trump because they understand that their survival depends on Trump’s removal and a return to the status quo of the deep state and the noxious swamp inside the beltway.

The seed that Graham planted, which has the swamp rats shaking in their Guccis, involved the trying of American citizens charged with crimes against the nation, such as treason and sedition, by military tribunal versus by a regular civilian court.

Graham asserted, and Kavanaugh confirmed, that military tribunals have existed throughout American history to try American citizens who were charged with treason or sedition, most notably for aiding and abetting known national enemies, in cases like oh, I don’t know, funding and arming terrorists in places like, say, Benghazi.

Graham also asserted, and Kavanaugh confirmed, that the precedent has been set, that traitors in the past had been charged, tried, and convicted by military tribunal, and then executed.

Following is one thrilled patriot screaming his approval of Graham’s surreptitious planting of the seed for trying the treasonous swamp rats by military tribunal and possibly executing the worst of them. Images of Hitlery and Barack Hussein being frogmarched to the gallows immediately came to mind.

Check out how giddy the maker of this video, who calls himself Black Conservative Patriot, is over this not-insignificant development in the war against the deep state.

I’m with you, brother. Root ’em out and string ’em up!

Wow after Lindsey Graham questioned Kavanaugh on military tribunal vs criminal court the left is out in full force against him. Spinning all he says and asks re Kavanaugh. He's even trending! But they don't like him this time. He's not stomping on Trump

They should be extremely worried now because Lindsey Graham asked questions about using a military tribunal for Americans who are working with the enemy. Kavanaugh agreed… 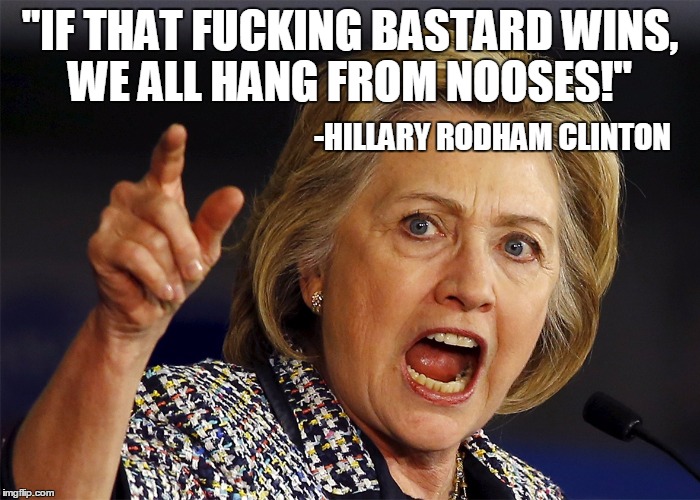