Update video on the killing of LaVoy Finicum provided by a member of LaVoy’s immediate family. I will continue to update as new info is provided

I have been struggling all day with the decision of whether or not to publish this. Given the attacks on our Constitution by the very government that that Constitution was written to protect We the People from, I think it is important to remember that Sunday, January 26, is the fourth anniversary of the killing of LaVoy Finicum who video evidence shows with his hands raised as he was shot nine times and killed in Oregon by the Oregon State Police and FBI.

Eyewitness reports indicate that LaVoy was unarmed. His personal sidearm was an open carry revolver he wore on his right hip in a holster. That weapon was left at the refuge. The government claims that LaVoy reached into his left jacket with his right hand to retrieve a 9mm pistol that was found on his body. That pistol was reported to have been stolen. Claims are that it was planted by the government to justify the killing.

Trending: Guess who this is. Guess what his son did in Orlando a few days ago. Guess whose office he is seen visiting in this pic.

After shooting and killing LaVoy, the government fired several shots (eight, the government claims) into LaVoy’s truck full of passengers for no apparent reason. Shawna Cox, a passenger in the vehicle recorded the ambush on her cell phone (video below).

Finicum was reportedly not reaching for a pistol, but rather he was reaching for the wound he had just received to his lower left abdomen, as pictured below. 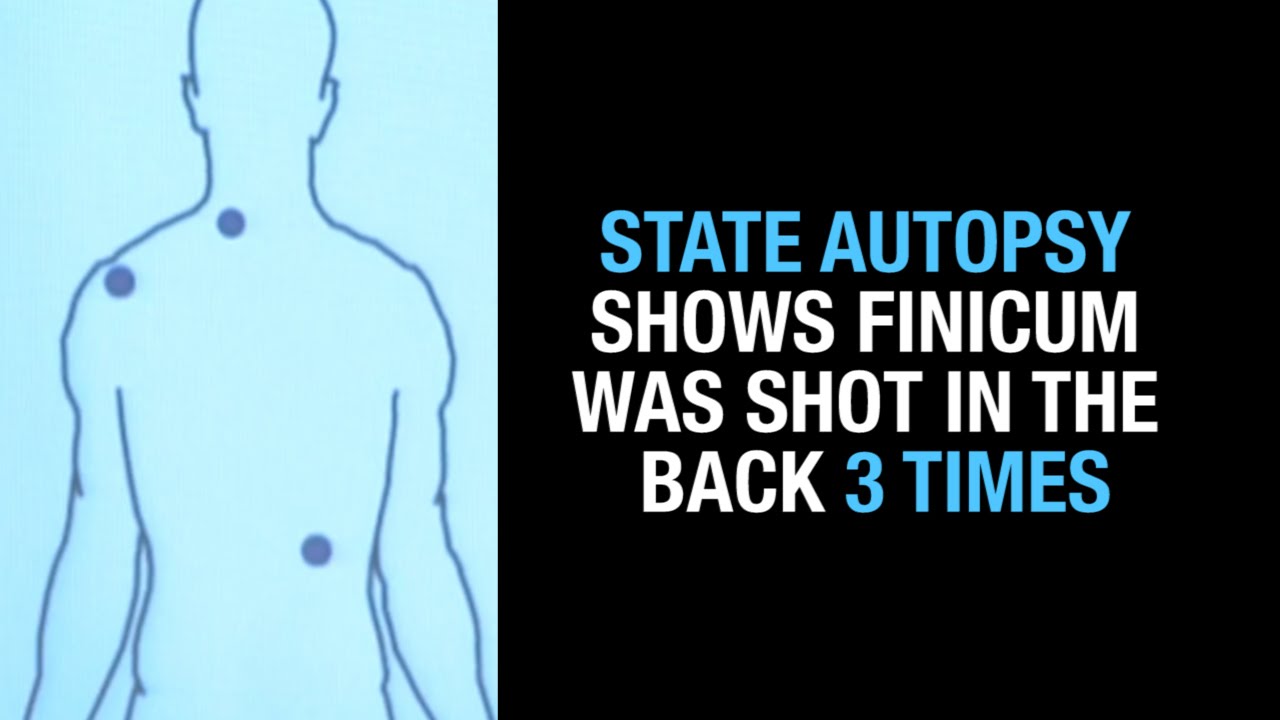 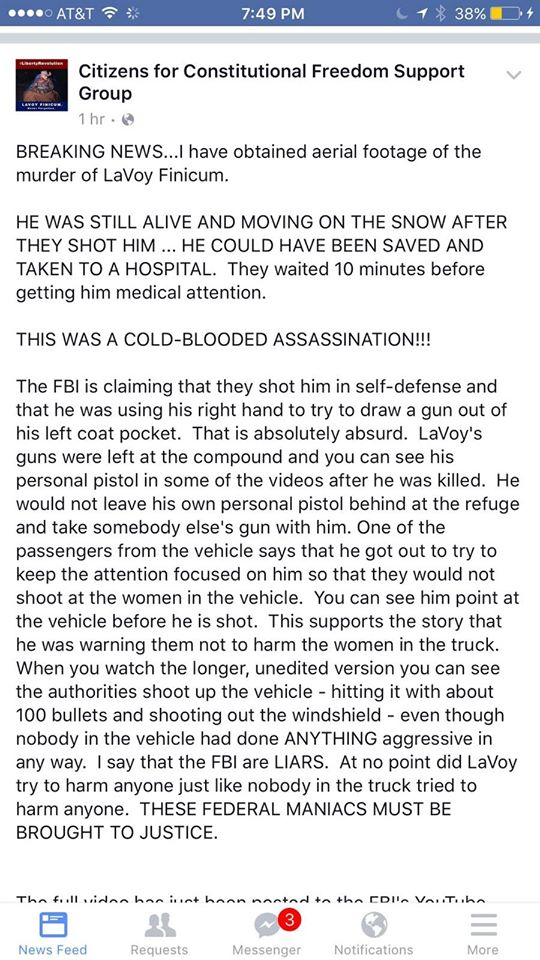 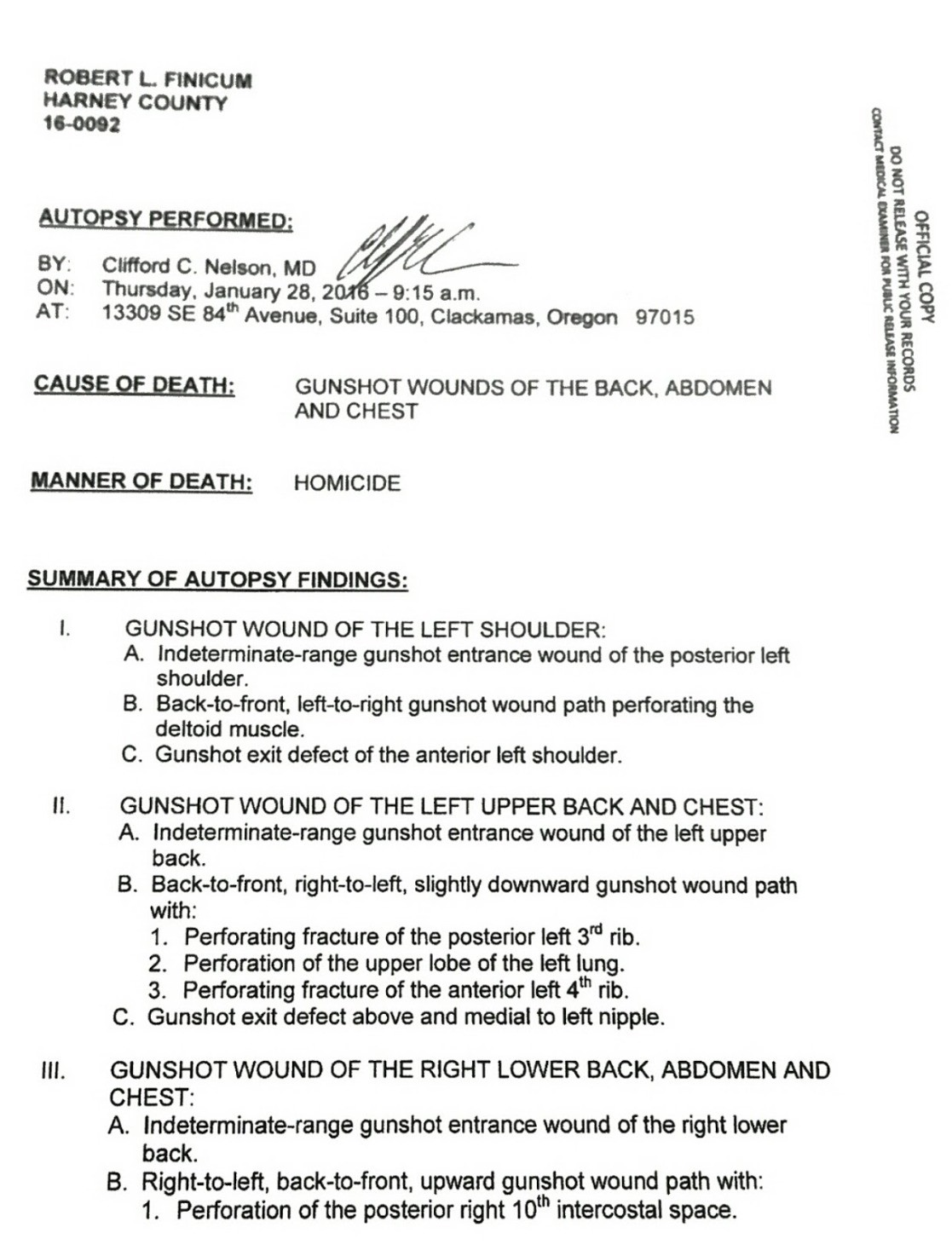 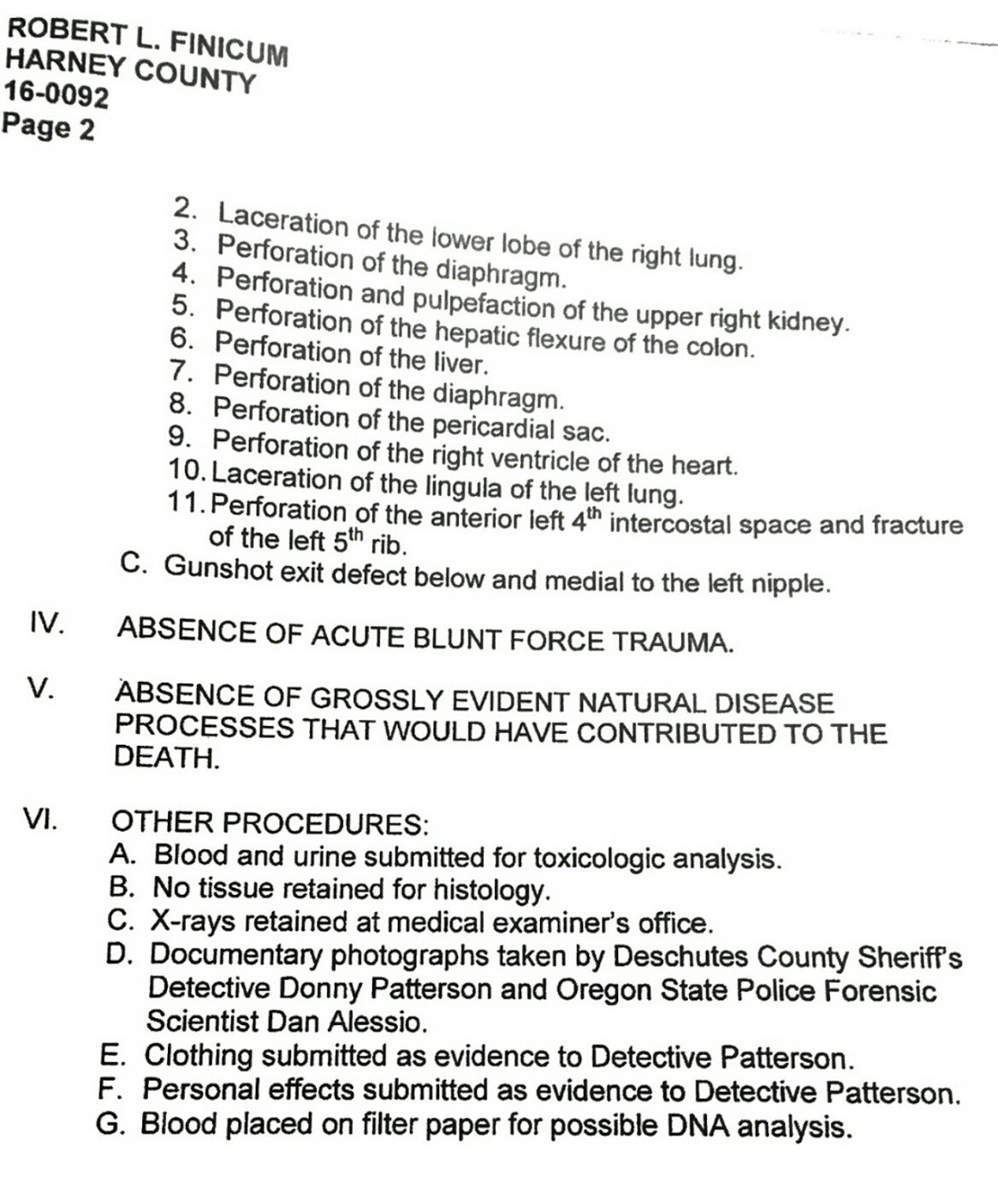 Is it only coincidence that dirty cop Andrew McCabe was running the FBI for Barack Hussein, the most corrupt president in American history, when LaVoy was killed? No, it is not a coincidence. Remember, it was McCabe who shouted at a Washington social gathering, “Fuck Flynn. Now, we fuck Trump!” If there is any justice left in America, McCabe will soon be in prison. 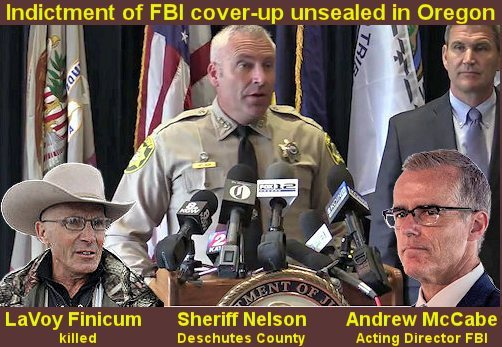 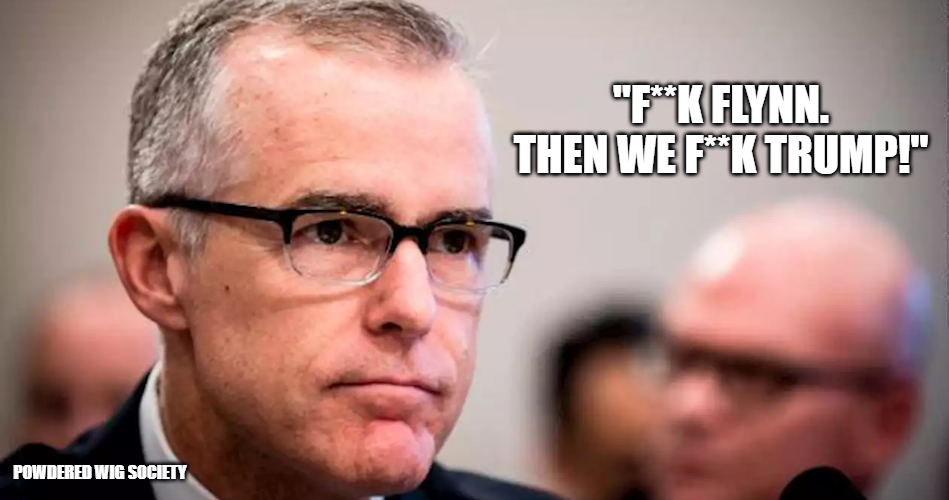 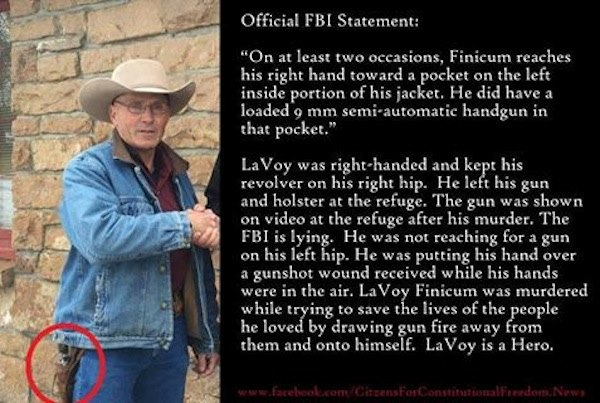 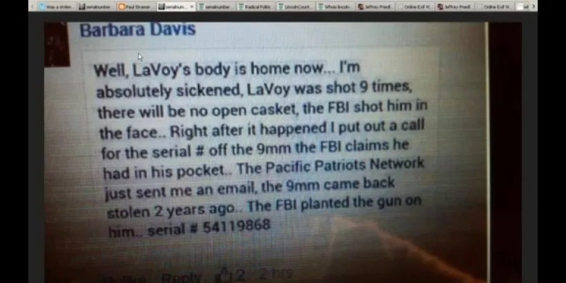 America is a very scary place today. Our government has far too much power and can literally do whatever it wants and get away with it. We are nothing more than a very large, very powerful, banana republic.

UPDATE, 1/30/2020: To be fair to the government, there is solid video evidence (below) that LaVoy was reaching into his jacket during the encounter with Oregon State Police and the FBI, and LaVoy was known to carry a 9MM in a shoulder holster on his left side (pic below). However, there is no audio. We can’t really tell if LaVoy had been shot already and was not reaching for a gun, but for the fresh wound to his abdomen. According to eyewitness reports, an FBI agent fired at LaVoy twice as he exited the vehicle while LaVoy had his hands raised in surrender. The agent then lied about it, claiming he didn’t shoot, and was charged. Also, I can find no evidence of LaVoy ever carrying the 9MM in his jacket pocket as the police report claims. When he carried the 9MM, it was in a shoulder holster. Could he have been in a hurry when he left the refuge and simply placed the 9MM in his jacket pocket? Sure, but it seems unlikely. Can anyone shed more light on this? 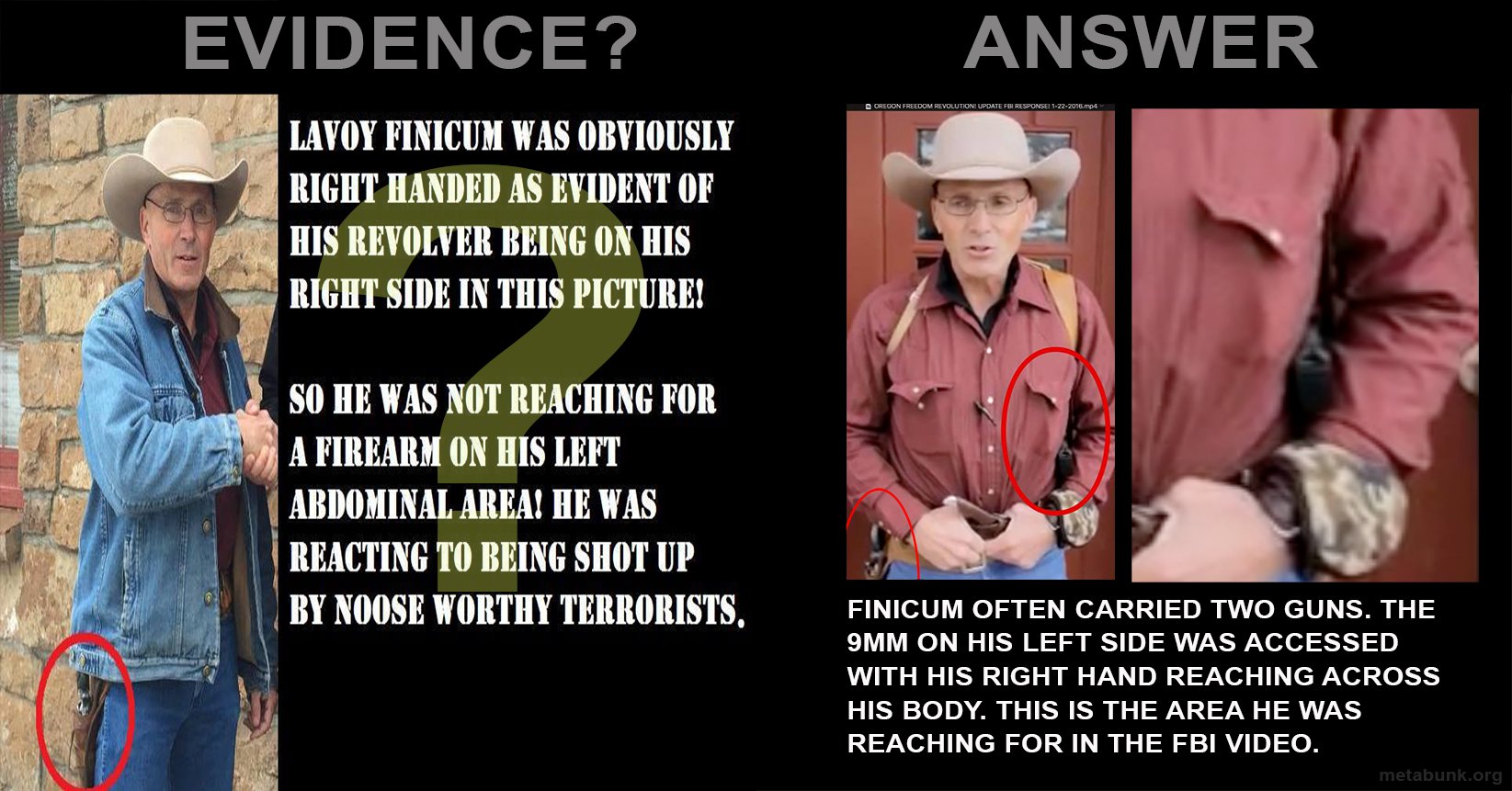 Except the police report says that Lavoy’s 9MM was in a jacket pocket, not a shoulder holster.

Why was it then necessary to shoot up LaVoy’s truck full of passengers who posed no threat whatsoever?

UPDATE, 2/4/2020: I have been in touch with a member of LaVoy’s immediate family who I won’t identify, even by gender. That family member has confirmed that the family believes that the 9MM handgun found on LaVoy was planted by either the FBI or Oregon State Police after LaVoy was shot and killed.

However, the most natural way to plant the gun on LaVoy by another person would be to place it in the position in which it was found, upside-down.

This is very, very unusual and reinforces the Finicum family belief that the handgun was planted on LaVoy after his death to justify the killing.

This video, sent to me by a member of the Finicum family, explains in greater detail. I will continue to update this article as new information becomes available.