Kamala Harris is not eligible to serve as president. She is not a “natural born” citizen. Neither of her parents were American. Who cares, right?

It appears Kamala Harris is attempting to pull a Barack Hussein in 2020, failing to meet the citizenship requirement to serve as president, but running anyway. Why not? Hussein got away with it.

The “natural born citizen” language in the Constitution, as inconvenient as it may be, is where both Hussein and Harris fall short in qualifying to serve as president.

Barack Hussein was never able to prove his US citizenship. Submitting a clearly fake birth certificate to the American people does NOT qualify one to serve as president, and Hussein’s birth certificate is not only a fake, but a very poorly manufactured fake, as pointed out by Investigator Mike Zullo in the following video.

As for Kamala Harris, neither of her parents were US citizens when she was born, automatically disqualifying her from serving as president. As with all children born to foreigners in the United States, Harris is a “naturalized” citizen, a so-called “anchor baby,” not a “natural born” citizen, a night and day difference in terms of qualifying to serve as President of the United States as outlined in Section 1, Article 2 of our Constitution.

From Kamala Harris’ Wikipedia page: “Kamala Harris was born on October 20, 1964, in Oakland, California, to a Tamil Indian mother and a Jamaican father.”

The foregoing video makes four key points, three of which are valid. Point #3 is not valid.

1. Kamala Harris is an anchor baby, born to a Caucasian Indian mother and a Jamaican father. Until and unless Harris can prove otherwise, this appears to be true, as Harris’ birth certificate, below, proves.

2. Kamala Harris is not African-American, she is Jamaican-Indian. Technically, true, although I believe Harris is leaning on her Jamaican heritage to claim African descent, as many Jamaicans were descendants of African slaves.

3. Kamala Harris is not eligible to be a United States Senator if she was an anchor baby and has not become a U. S. citizen. Not true. According to the Senate, from its own website, “The Constitution sets three qualifications for service in the U.S. Senate: age (at least thirty years of age); U.S. citizenship (at least nine years); and residency in the state a senator represents at time of election.” Thus, Kamala Harris is qualified to serve as a US Senator, making Point #3 invalid. Harris is a citizen, albeit naturalized at birth, of legal age, and meets the residency standard.

4. Kamala Harris is not eligible to hold the position of President of the United States. True, according to all that we know and Section 1, Article 2 of our Constitution. 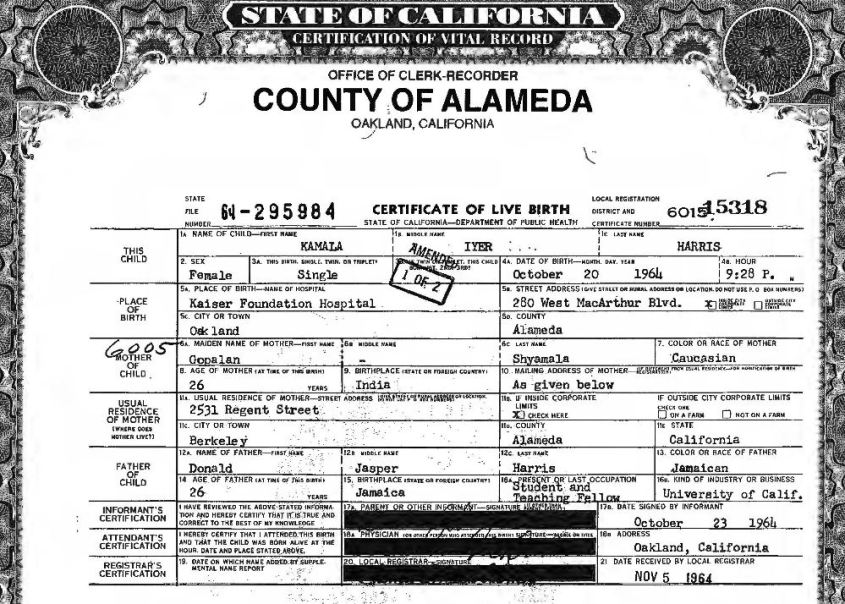