UPDATE: The most dangerous man in America. Another nosedive day for the market after Fed raises the prime. Trillions of dollars of US wealth wiped out

I recall in the prelude to the 2008 real estate crash, Fed Chairman Ben Bernanke threatening to raise the prime interest rate to intentionally cool off our booming economy by bursting the housing bubble. I recall thinking how disastrous that would be not only to the economy in general but to me, personally, as I was a building contractor/developer and had three million dollars in speculative residential construction underway.

I also vividly recall the day Bernanke made good on his threat. I was in my truck, driving to one of my jobsites, when the announcement was made. All weekends prior to his announcement that he had raised the prime interest rate one-quarter of a percentage point, there were 30+ couples touring our homes for sale. That coming weekend and subsequent weekends, we were lucky to see three or four couples. It was as though Bernanke had cut off the spigot. As a result, we were forced to sell houses that appraised in excess of $700,000 for $380,000 to $390,000. We were ruined and liquidated the company.

Bernanke’s fiddling with the interest rates is now generally considered to have been foolish and certainly disastrous to our then-vibrant economy.

Could it be that Bernanke was intent upon cooling off the economy because President George W. Bush was receiving credit for the boom and leftists had convinced Bernanke that the economy must be cooled if the Democrats were to have a chance of retaking the White House in 2008? It certainly seemed that way at the time.

In the words of Yogi Berra, “it is déjà vu all over again.”

Today, Fed Chairman Jerome Powell is steadfastly on the Bernanke course, and, by all appearances, for the same (apparent) political reasons (my opinion). Lest President Trump be re-elected in 2020, our booming economy must be destroyed, and there is no better way to do that than by raising interest rates, which results in spooking investors who stop pumping investment capital into the economy, causing the stock market to tank, new construction to cease, unemployment to rise, and American wealth to disappear. Poof! Gone! Thin air!

Since Powell embarked on his mission to destroy the US economy, four trillion dollars of American wealth has disappeared, and liberals from sea to shining sea are applauding his success.

Although Powell was appointed by President Trump, he is reported to be very left-leaning in his political philosophy and “closer to Schumer than Trump.”

So, what can be done to reverse the disastrous effect of one man’s influence on America’s economic lifeblood?

He can be fired. According to Forbes, “Tucked away deep inside the Fed’s founding law is a provision Trump could use to completely rebuild the Federal Reserve Board of Governors.”

Many subscribe to the myth that the Federal Reserve is independent of the government and does not answer to same. Let’s dispell that myth here and now. The entire 7-member Board of Governors of the Federal Reserve serve at the pleasure of the President of the United States. He appoints them and they are confirmed with the advise and consent of the Senate. And, he can fire them. He can fire them for “cause,” meaning he must have a good reason to fire them. I think jeoparding national security would be a good reason.

The good news is President Trump can fire Powell and the entire board if he feels they are all on the same “Destroy America” mission, and then he can appoint patriots who will not fiddle with the prime, and they will be confirmed by the Republican Senate with no opportunity for the obstructionist Democrat House to interfere.

I’m not sure that a President has ever fired a member of the Federal Reserve Board, but if it is necessary to save the economy, it is necessary, and I am all for it. Our “on fire” economy does not need slowing down or cooling off for any reason and damn the traitor who does it!

“….each member shall hold office for a term of fourteen years from the expiration of the term of his predecessor, unless sooner removed for cause by the President.”

As can be seen in the graph below, the volatility and drastic drop in the market began in earnest in early October in response to Powell’s September 26 rate hike. There have now been eight rate hikes by the Fed in the two years President Trump has been in office, including the rate hike on December 14, 2016 when Trump had been elected but not yet inaugurated. In contrast, the rate was raised one time (by 1/4 of a percentage point) during the eight years of the Obama administration. 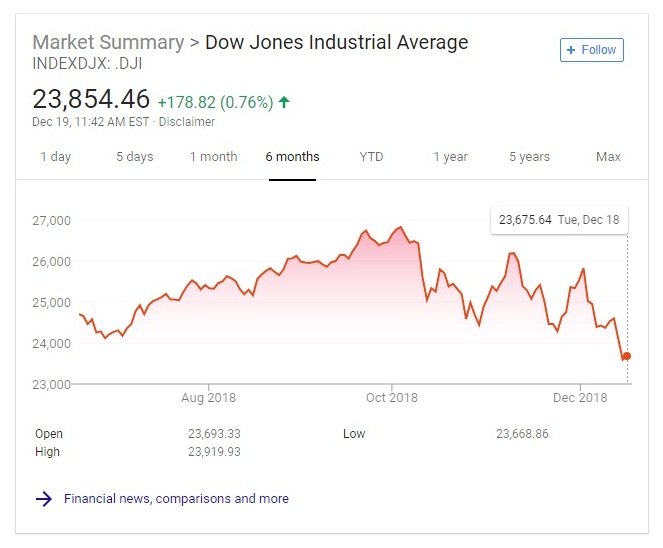 As feared, the Fed raised the prime again today. The market immediately began tanking, the Dow dropping over 750 points from its 2 PM peak of 24,035 in less than two hours. This is gross economic stupidity! 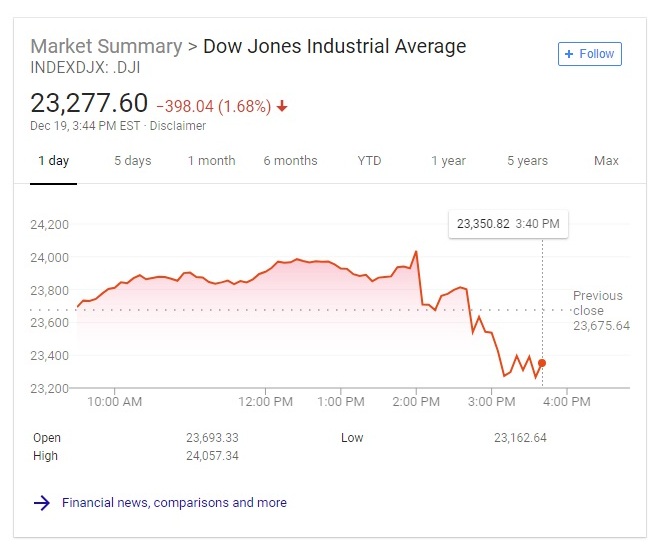 UPDATE (12/20/2018): After the Fed’s confounding raise of the prime yesterday, the Dow tanked another 464 points today. Any freshman economics major knows that the last thing you do when the market is already tanking is raise the prime, causing it to tank even further and scaring investors away from the market. They will gladly sit on their investment capital rather than investing it to create jobs and prosperity. The market is now a dumpster fire, thanks to Fed Chairman Jerome Powell.

I see absolutely no way that this insane maneuver, like throwing a drowning man a cinderblock, is not intentional, and Suspect #1 is George Soros, in my opinion. No matter who is behind the insanity, Democrats are celebrating. Tanking the economy is great news for them in 2020. They care not a whit for everyday Americans. They don’t care if you are unemployed and can’t buy groceries for your family. They only care about remaining in power and retiring filthy rich.

President Trump should fire every member of the Board of Governors of the Federal Reserve who voted for this treason and replace them all with true patriots. 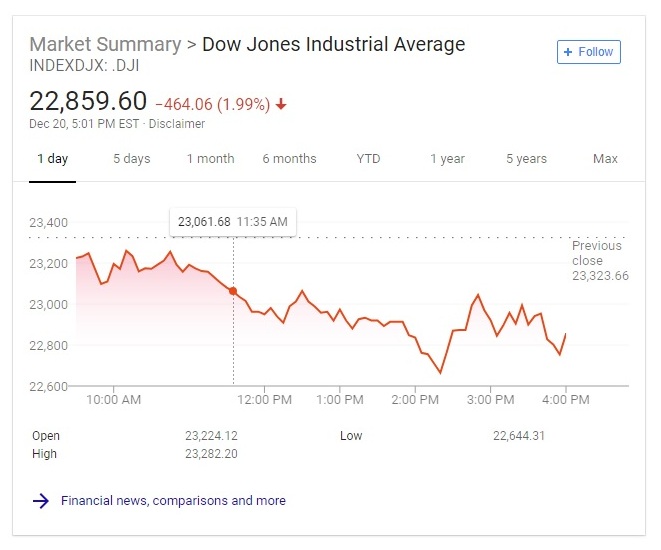 Next step in the "destroy Trump" playbook … erase economic and stock market gains.

California Democrat Harley Rouda Has a Restraining Order Against Him- Filed by His Own Mother!
September 23rd, 2020 Big League Politics
Send this to a friend