VIDEO – Gingrich on the corruption by Hitlery, Comey, Mueller, Rosenstein, McCabe, Strzok, et al. “It is very likely all of these people will end up going to jail”

Hitlery said it first, if not best: “If that fucking bastard (Trump) wins, we all hang from nooses!” Newt Gingrich agrees with her. And, he believes a whole lot of swamp rats are going down with her. I agree, and not until then will we begin to see the sexual misconduct ruination of lives begin to cease, the corruption at the highest levels of government stop, and finally President Trump being afforded the peace and quiet he needs to continue making America great again.

I don’t mean to digress, but while doing a search to confirm that I had Hitlery’s quote exactly right, I found the original report of one of Hitlery’s famous meltdowns, which became a side story, she condemning Matt Lauer for asking a question that was not scripted (asked by Lauer during the infamous debate that Donna Brazile gave Hitlery all of the questions to), screaming, “If that fucking bastard (Trump) wins, we all hang from nooses! Lauer’s finished (now you know what happened to Lauer), and if I lose, it’s all on your heads (her staff and Brazile) for screwing this up.”

Back to the main story….

Andrew McCabe is the second-highest ranking person in the FBI. He is just another openly brazen Trump-hater who has escaped accounting for his shameful bias. I expect him to be in the spotlight and likely fired very soon. Remember when he said this at a social function…. 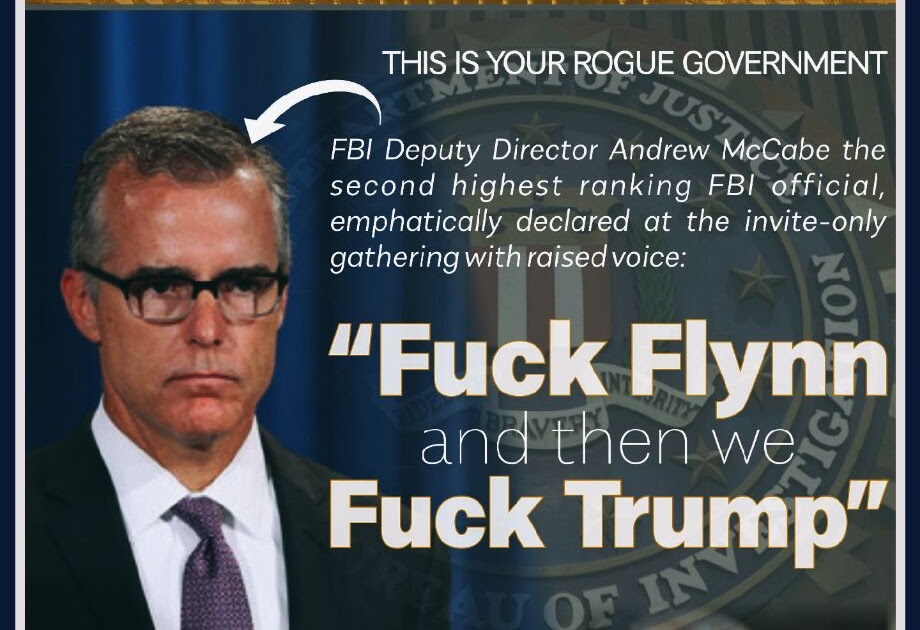 The cover is blown off of partisanship at the nation’s top law enforcement agencies, and the credibility of the top actors involved may never recover, rightly declares BizPac Review.

Former House Speaker Newt Gingrich took to “Hannity” on Thursday to blast the FBI and Department of Justice for allegedly shielding Hillary Clinton during the investigation into her private email server while leading the State Department.

Another edit was changing the statement that it was “reasonably likely” “hostile actors” obtained access to Clinton’s private email server to saying it was merely “possible.”

According to a CNN report, the FBI agent who suggested one of the changes was Peter Strzok, who was removed from Special Counsel Robert Mueller’s Russia investigation after the Department of Justice discovered his anti-Trump text messages to his mistress, FBI lawyer Lisa Page.

The released edits stirred further controversy because they were made before the FBI interviewed Clinton and a number of key figures.

The revelation prompted Hannity to declare “the fix is in.”

“If we both sat down and said two years ago and said ‘let’s write a story in which the head of the FBI consciously sets out to protect Hillary Clinton no matter how guilty she is, consciously sets out to protect her staff no matter how guilty they are, sets up everything so that even his statements in public will exonerate her,’ we couldn’t have made this up. …

“This is a very serious question for the Congress, and frankly, I think it puts an enormous amount of pressure on the Attorney General. Because I think Attorney General Sessions has an absolute obligation to look at this information and begin to think about how they’re gonna prosecute Comey, and how they’re gonna prosecute all of these senior FBI agents … .”

He also called the handling of the Clinton and Trump investigations an example of “methodical corruption.”

“I challenge anybody in our audience to find me a case where you have this kind of methodical corruption, this violation of the rule of law at this level of bureaucracy. Not the political apppointees at the very top. The people who have spent their whole career who are sworn to uphold the law.”

Gingrich in somber terms. “And I think it’s maybe the greatest crisis in terms of law and order and the rule of law in American history.”

Biden Should Be Charged With Treason Before He Even Takes An Oath For His Attack On The Second Amendment
January 16th, 2021 Sons of Liberty Media