Muslim Democrat running for office in Minnesota has divorced her brother due to the bad optics. Not kidding!

Fresh from the desk of You Can’t Make This Stuff Up we have yet another bizarre story featuring an American Muslim “refugee.”

Just when you thought Muslims could get no more corrupt or immoral, the story emerges of Somali-born Minnesota Muslim Democrat Ilhan Omar who has divorced her brother to avoid the obviously bad PR the marriage would create for the congressional candidate. That’s right, this uber-corrupt woman is a Democrat candidate for Congress and is expected to win.

In addition to the marriage being immoral, it is also highly illegal, as Omar was already married when she tied the knot with her brother, ostensibly to gain him entry into the United States, which worked like a charm.

Ilhan will certainly be elected to Congress if she wins the Democrat primary (she is currently the frontrunner) as she will be running unopposed in the general election to fill the seat of fellow Muslim Keith Ellison who is running for Minnesota Attorney General.

Instead of serving in Congress, Omar now potentially faces up to 5 years in prison on the bigamy charge alone. Add several counts of fraud, and it could be many years before Omar again enjoys the freedom she came to America to exploit in every way possible.

Barring any unforeseen obstacles, like prison, Ilhan is on her way to Washington. 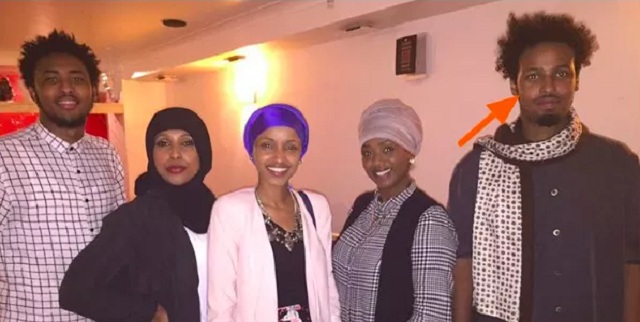 Ilhan and friends. On the right is her brother or husband or whatever, Ahmed

Somali American Ilhan Omar defeated 22-term incumbent Phyllis Kahn for the nomination of the DFL to serve as the representative of House District 60B in the state legislature. Omar came in first in a three-way primary race for the nomination in Tuesday’s primary. When elected, Omar will be the first Somali American to serve in the Minnesota legislature.

The Star Tribune hailed Omar’s victory as “historic” in a celebratory day-after story. How did Omar do it? They’re pretty excited about it over at the Star Tribune, as they were when Keith Ellison secured the DFL nomination to represent Minnesota’s Fifth Congressional District after a contentious four-way primary in 2006.

Photo, above: Ilhan and her other husband and their three children

A reader has written us to point out that the Somali website Somalispot posted information last week suggesting Omar’s involvement in marriage and immigration fraud. The post notes that Omar married Ahmed Hirsi in 2002. Hirsi is the father of Omar’s three children. Omar is depicted with Hirsi and their children on Omar’s campaign website here.

The post further notes that Omar married her brother Ahmed Nur Said Elmi in 2009, implying that the latter marriage assisted his entry into the United States. Her brother was a British citizen. “As soon as Ilhan Omar married him,” the post continues, “he started university at her [a]lma mater North Dakota State University where he graduated in 2012. Shortly thereafter, he moved to Minneapolis where he was living in a public housing complex and was later evicted. He then returned to the United Kingdom where he now lives.”

Like all parasites, Elmi exploited American generosity as long as he could, then found another host (UK) when that gravy train derailed.

Let me note here that Omar’s marriage to her brother, if it occurred in fact, is illegal under Minnesota law. I believe it would be void ab initio, as though it never occurred. If it occurred, I infer that it must have taken place for dishonest purposes.

Any such second marriage might be bigamous as well as fraudulent. That is not clear to me. Minnesota law defines bigamy as “knowingly having a prior marriage that is not dissolved” while also “contract[ing] a marriage in this state.” Bigamy is a crime punishable by up to five years in prison or a fine up to $10,000. The definition and penalty provisions of the crime of bigamy are set forth in Minn. Stat. § 609.355.