BOMBSHELL! The letter from Christine Ford to Dianne Feinstein is apparently as fake as Barack Hussein’s birth certificate

So, exactly what is going on here?

Two professional writers have evaluated Christine Blasey Ford’s letter to Dianne Feinstein and determined that it is a total fake, riddled with mistakes one might expect of an adolescent or an individual for whom English is a second language, not his or her native language.

Do you recall Sheriff Joe Arpaio and Mike Zullo conducting an expert forensic analysis of Barack Obama’s birth certificate and concluding that not only is the birth certificate fake, but it is an amateurish, very poorly fabricated fake?

Trending: Massachusetts AG supports America burning to the ground: “Yes, America is burning, but that’s how forests grow.” And that’s how countries and cultures die!

Well, the letter Feinstein claims was authored by Ford, accusing Brett Kavanaugh of sexual assault, is apparently just as fake. But, just watch, the Democrats will get away with it again.

Democrats are so careless, their attention-to-detail skills so lacking and congressional Republicans so gullible that Dianne Feinstein could submit her grocery list to the Republicans and swear it is a letter from Vladimir Putin admitting that he and President Trump are homosexual lovers bent on destroying the world, and the Republicans would take her seriously, submitting to Democrat demands that this national security threat be investigated immediately.

Dr. Dannielle Blumenthal, Ph.D., and Mike Adams, author of bestselling book Food Forensics and publisher of Natural News, have evaluated Ford’s letter, for which both are imminently qualified, and returned the following findings in a 14-point critical analysis.

For reference, the letter alleged to have been written by Ford to Feinstein is provided and highlighted below the following 14-point Natural News list of obvious grammatical, punctuation, printing and contextual errors found in the letter.

14 mistakes that demonstrate the letter was not written by Dr. Christine Blasey Ford

Ph.D. writers are highly trained in writing. In fact, it is an essential part of their education. Yet the letter released by Sen. Dianne Feinstein is riddled with simple errors that point to a writing level that barely qualifies as “high school” composition skills.

Here are the 14 glaring mistakes and discrepancies in the letter:

The font size of the first line of the second paragraph, where Brett Kavanaugh’s name is first mentioned, is oddly 140% the size of all the other lines in the document. This could indicate one of several things: 1) The line may have been altered after the fact by a person who failed to be careful in carrying out an attempted document alteration. 2) The document may have been printed on a printer that suffered a line feed problem on that one particular line. However, this problem would typically reveal horizontal white stripes in the line, and such lines do not appear. 3) The line may have been added in a rushed, last-minute fashion without careful attention to the font size.

The first sentence in the second paragraph contains a glaring error. It states that “…sexually assaulted me during High School in the early 1980’s.” This use of the apostrophe in the “1980’s” is a very common error made by people who possess poor writing skills, but those who are highly educated know that the proper construction is “1980s” (without an apostrophe). Why no apostrophe? Because it indicates possession, of course. And the “1980” isn’t possessing anything here. She simply means the decade from 1980 to 1989. All professional writers know that is properly described as “1980s.”

#4) The strange capitalization of “High School” — a newbie writing error

Also in the same phrase, “…sexually assaulted me during High School in the early 1980’s,” the writer inexplicably capitalizes “High School.” This is another obvious, “newbie” error in writing that might typically be made by a very inexperienced or low-education individual. In this sentence, “High School” is not a proper noun, so it should not be capitalized. The proper time to capitalize such a phrase would occur if the full name of the high school in question were included, turning it into a proper name of a high school, such as the, “Marjory Stoneman-Douglas High School.”

The second sentence in the second paragraph states, “Both were 1-2 years older than me and students at a local private school.” This is a grammatical error that’s typical of low-skilled writers. A more skilled writer would have written something closer to, “Both were 1-2 years older than myself and other students at a local private school.” The sentence is still awkward, but improved. The construction of this sentence smacks of a poorly educated individual with very little writing experience.

#7) “I feared he may inadvertently kill me” word choice problem

Here’s another sentence from the letter: “From across the room, a very drunken Judge said mixed words to Kavanaugh ranging from ‘go for it’ to ‘stop’.” This contains two oddly phrased words that indicate a very low level of writing skill. The term “drunken” should have been written as “drunk.” Only a very inexperienced writer would use the term “drunken.” Similarly, the phrase “mixed words” seems to be something that a non-native English speaker would write, not a highly trained Ph.D. who went to a reputable university in America.

#10) “the two scrapped with each other” odd phrase

The next sentence claims, “The pile toppled, and the two scrapped with each other.” Again, this seems like a very odd choice of words for any accomplished, experienced writer. The entire sentence reads like something written by a non-native English speaker. Who says “scrapped” when they mean “fought?”

One of the tactics used by low-level writers to try to impress their intended audience is to use sophisticated-sounding words that are “above their pay grade,” so to speak. I see this frequently in writing samples authored by young writers with very little writing experience. In this letter, the phrase, “…I was able to take this opportune moment to get up…” is a glaring red flag that the letter wasn’t written by a well educated individual. Who uses “opportune” in such a context? Only a low-level writer hoping the word makes them sound sophisticated.

Here’s a sentence near the end of the letter: “It is upsetting to discuss sexual assault and its repercussions, yet i felt guilty and compelled as a citizen about the idea of not saying anything.” Note that the “i” is not capitalized in the phrase, “yet i felt guilty.” This is another red flag error only made by an extremely inexperienced writer. No Ph.D. would make such an error, but a low-information blogger or activist is very likely to make such an error. The failure to capitalize “I” words is also very common among younger writers below the age of 25.

This phrase suffers from poor sentence construction and a lack of clear thinking. The word “compelled” implies an action item. People are compelled to do things. You do not experience being “compelled” about an “idea.” The entire phase, “yet i felt guilty and compelled… about the idea” is not something an educated, experienced writer would write.

#14) Christine Blasey, who says she is afraid to fly, is “vacationing in the mid-Atlantic until August 7th and will be in California after August 10th.”

This is not a grammatical error; it is a logic problem. We’ve been told for over a week that Christine Blasey Ford did not wish to testify in front of the U.S. Senate because she had a fear of flying. But in this letter, she is apparently flying great distances for a vacation. Her online photos also show her to be vacationing in Hawaii, which requires a very long flight. 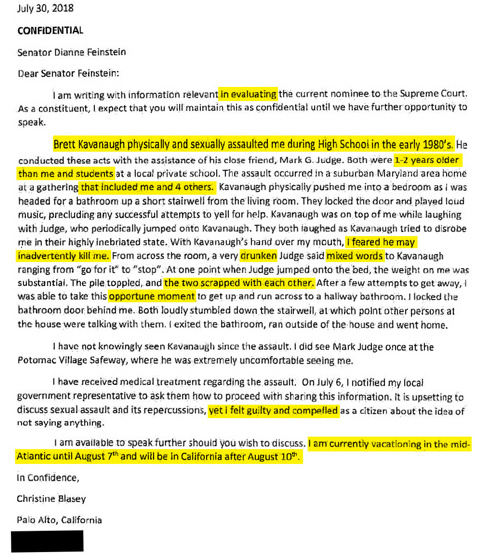 In the following video, Mike Adams explains his and Dr. Blumenthal’s critical analysis of the fake letter alleged by Dianne Feinstein to have been authored by Christine Ford.

HCQ ‘study,’ retracted this week, was absurdly suspect from the beginning – yet got WHO clinical trials shut down
June 6th, 2020 Liberty Unyielding

The Lid Exposed Helen Thomas A Decade Ago-And The MSM Is Still Protecting Her
June 4th, 2020 The Lid