There is no longer a question that Fed Chairman Jerome Powell is raising interest rates in an attempt to destroy the booming Trump economy. The burning question is, “why?”

I have my own theories and suspicions, and they all lead to George Soros and his money. Regardless of who is behind the intentional economic catastrophe, the America-hating Democrats are cheering it on. They hate America and they hate Donald Trump, so it’s a Merry, Merry Christmas for them. Not so much the rest of America, especially the middle-class working stiffs who make the economic engine of the world’s greatest economy hum.

The Dow tanked again on Friday, this time over 400 points, making it a two-day nosedive of 1,600 points since Fed Chair Jerome Powell’s bizarre announcement on Wednesday that he was raising the prime interest rate yet again.

The first chart below shows Friday’s dismal market performance. The second chart clearly shows the market’s nosedive since Powell’s December 19 announcement. Only a certified moron or a corrupt as hell, bought and paid for political operative would see this disastrous performance as a good thing. Powell is not a certified moron. 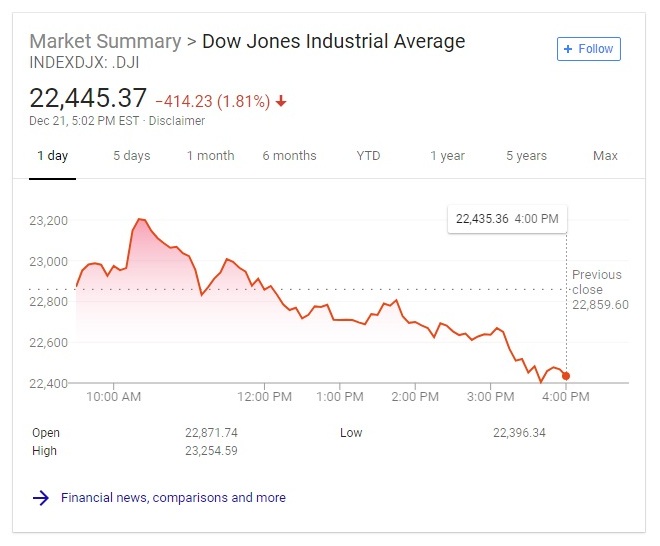 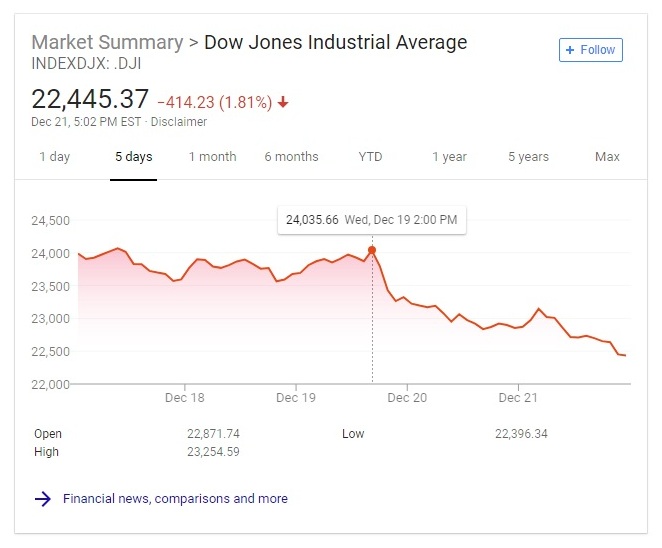 Despite six previous cuts to the prime since President Trump’s election, the economy continued to hum along, apparently unaffected, likely on simply the fact that President Trump’s actions were clearly market-friendly, proving to investors that the Trump economy was for real and with Trump at the helm, the sky was the limit and nothing was going to alter the course to unlimited prosperity.

So, Powell gave it another try, raising the prime on September 27 2018, which was finally the straw that broke the market’s back. The chart below illustrates the volatility in the market since that rate hike, which has caused a 4,393-point drop in the market, a 16.4% plunge.

Rather than correct the obviously damaging rate hike by reversing it, Powell has doubled down with yet another rate hike with a promise to raise the prime at least two more times in 2019, which has caused investors to begin bailing on the market.

If the September rate hike didn’t convince onlookers that Powell is either insane or corrupt, then this week’s hike proved it. 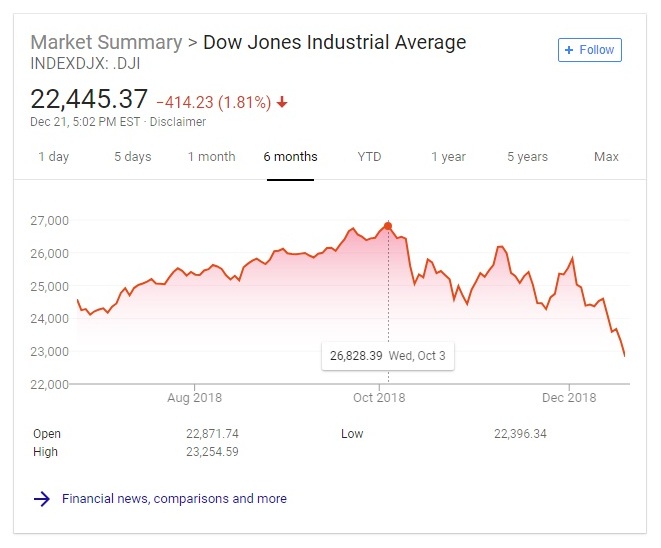 A five-year snapshot of the Dow (below) clearly shows the positive effect of President Trump’s pro-business initiatives from the time of his election until Powell’s September 27, 2018 rate hike, which threw the market into the current period of volatility and instability, and also the effect that the Fed’s rate hikes have had on an incredibly strong and robust economy, which Powell and the Fed are destroying. 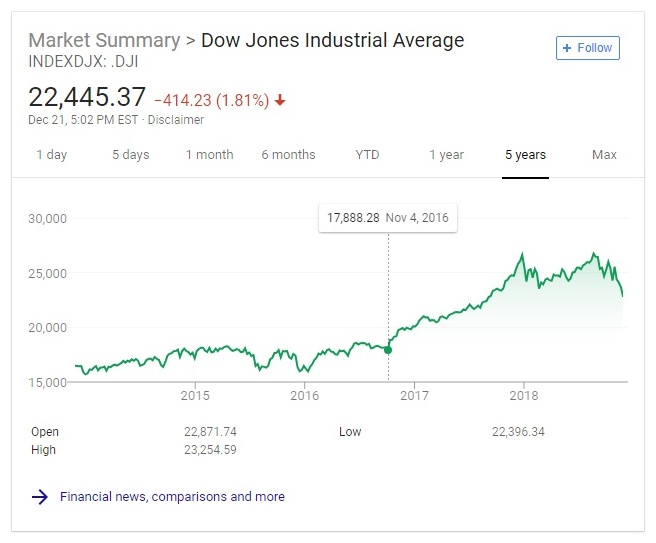 As we reported in a Thursday article, President Trump can and should fire Jerome Powell immediately, as well as any other member of the Federal Reserve Board of Governors who believes that the insanity of the Fed’s rate hikes is a benefit to the economy. I don’t believe that it can wait. Powell must be fired before he can implement another rate hike, which, according to history, he will implement in late March.

However, with Powell simply at the helm of the Fed, the market is likely to continue its downward spiral. If he is replaced now with a pro-business Fed Chairman who immediately announces rate reductions, and then carries through on them, the market will respond accordingly with investors returning and the boom continuing.

Although no President has ever fired a Fed Chairman, according to language in the Federal Reserve Act, he certainly can. The President appoints members to the seven-member Federal Reserve Board of Governors, the Senate confirms them (thus no Democrat House obstruction), and the President can fire them.

There is no doubt that DC Democrats will challenge the termination in court. Let them! Fire Powell anyway and appoint a patriot to that position. Your attorneys will argue the Federal Reserve Act language that grants the president that authority. In the meantime, ignore the court on the grounds of national security. No judge can usurp the authority of the President of the United States. Don’t allow it!

California Democrat Harley Rouda Has a Restraining Order Against Him- Filed by His Own Mother!
September 23rd, 2020 Big League Politics
Send this to a friend