Douglas Campell was an FBI undercover informant during the Uranium One investigation. He has testified in writing to three Congressional committees that the Russians paid millions of dollars to gain control of American uranium, part of which was paid to the Clinton Foundation while Hillary Clinton was US Secretary of State. Russia DID gain control of 20% of America’s uranium assets as a result.

Based upon Campbell’s testimony, congressional investigators are seeking to expand their investigations into what appears to be obvious Russian collusion during the corrupt Obama administration.

Democrats and their official communications division, aka the mainstream media, are doing all they can to discredit Campbell’s testimony before it gains traction, Clinton spokesman Nick Merrill declaring, “Just yesterday the committee made clear that this secret informant charade was just that, a charade. Along with the widely debunked text-message-gate and Nunes’ embarrassing memo episode, we have a trifecta of GOP-manufactured scandals designed to distract from their own President’s problems.”

I am actually embarrassed for the Democrats. Here, they have been caught red-handed with their hand in the cookie jar, and despite overwhelming evidence, including eyewitness testimony, they are actually attempting to have us all believe that they are completely innocent and their HUGE problems are only the result of a GOP campaign to distract from the 35-page lie we call the Russian dossier, except we now know that not only did Hillary pay for the dossier, but practically wrote it, her longtime pal Sidney Blumenthal being outed as the actual source for the document, not Russians in Russia as we were previously told to believe.

The complicit liberal clowns who run America’s social media are also hard at work attempting to discredit Campbell’s damning testimony. At the top of the Twitter newsfeed is Yahoo News’ story challenging Campbell’s credibility as a witness. The “federal officials” cited in the Yahoo story are two unnamed sources Yahoo claims are knowledgeable about the case. 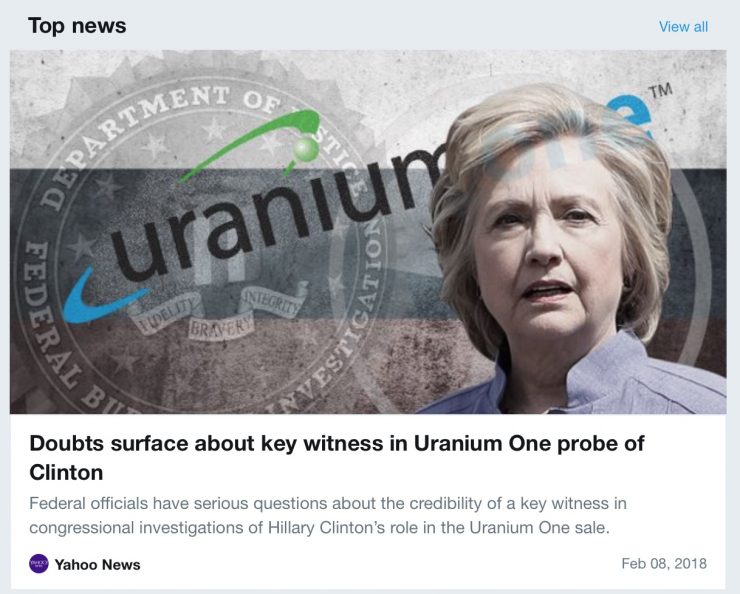 The Hill reports, that an FBI informant connected to the Uranium One controversy told three congressional committees in a written statement that Moscow routed millions of dollars to America with the expectation it would be used to benefit Bill Clinton’s charitable efforts while Secretary of State Hillary Clinton quarterbacked a “reset” in US-Russian relations.

The informant, Douglas Campbell, said in the statement obtained by The Hill that he was told by Russian nuclear executives that Moscow had hired the American lobbying firm APCO Worldwide specifically because it was in a position to influence the Obama administration, and more specifically Hillary Clinton.

Democrats have cast doubt on Campbell’s credibility, setting the stage for a battle with Republicans over his testimony.

Campbell said Russian nuclear officials “told me at various times that they expected APCO to apply a portion of the $3 million annual lobbying fee it was receiving from the Russians to provide in-kind support for the Clinton’s Global Initiative,” he added in the testimony.

“The contract called for four payments of $750,000 over twelve months. APCO was expected to give assistance free of charge to the Clinton Global Initiative as part of their effort to create a favorable environment to ensure the Obama administration made affirmative decisions on everything from Uranium One to the U.S.-Russia Civilian Nuclear Cooperation agreement. “

APCO officials told The Hill that its support for CGI and its work with Russia were not connected in any way, and in fact involved different divisions of the firm. They added their lobbying for Russia did not involve Uranium One but rather focused on regulatory issues aimed at helping Russia better compete for nuclear fuel contracts inside the United States.

“APCO Worldwide’s activities involving client work on behalf of Tenex and The Clinton Global Initiative were totally separate and unconnected in any way,” APCO told The Hill in a statement. “All actions on these two unconnected activities were appropriate, publicly documented from the outset and consistent with regulations and the law. Any assertion otherwise is false and unfounded.”

Nick Merrill, a spokesman for Clinton, said Campbell’s account is simply being used to distract from the investigations into President Trump and Russia.

“Just yesterday the committee made clear that this secret informant charade was just that, a charade. Along with the widely debunked text-message-gate and Nunes’ embarrassing memo episode, we have a trifecta of GOP-manufactured scandals designed to distract from their own President’s problems and the threat to democracy he poses,” Merrill said.

In addition to his written statement, Campbell on Wednesday was interviewed for several hours behind closed doors by staff from both parties on the Senate Judiciary, House Intelligence and House Oversight and Government Reform committees.

Democrats have asked that a transcript of the interview be released to the public, but a court reporter was not present for the interview and Campbell was not sworn in.

Republicans are seeking to use Campbell’s account to expand their investigations beyond the 2016 election and Trump to possible questions about Russian graft during the Obama administration.

They note that the FBI found Campbell’s undercover work valuable enough to reward him with a $50,000 check in 2016.

Democrats, in turn, have accused Republicans of making “wild claims” about Campbell and Uranium One.

In Cambell’s written statement, he accused Obama administration officials of making decisions that ended up benefitting the Russian nuclear industry, which he said was seeking to build a monopoly in the global uranium market to help President Vladimir Putin seek a geopolitical advantage over the United States.

The United States already imports more than 90 percent of the uranium it uses in nuclear reactors, according to U.S. government figures from 2016.

Campbell wrote that Russian nuclear executives “boasted” during vodka-fueled meetings monitored by the FBI about “how weak the U.S. government was in giving away uranium business and were confident that Russia would secure the strategic advantage it was seeking in the U.S. uranium market.”

He also said he asked his FBI handlers why the U.S. was not more aggressive.

“I expressed these concerns repeatedly to my FBI handlers. The response I got was that politics was somehow involved,” he stated.

Much of the GOP’s interest in Campbell’s story centers on the Obama administration’s approval of the Uranium One deal. That deal at the time gave the Russian mining giant Rosatom control of roughly 20 percent of America’s capacity to mine uranium.

The deal was approved unanimously in 2010 by the Committee on Foreign Investment in the United States (CFIUS), a multi-agency board that includes the State Department, the Defense Department and the Justice Department, among other agencies. The board has the power to block deals that threaten national security.